Two Italians and two Asians walk into a bar...

Not really, although could be hereabouts. The notable restaurants of the latter part of our 10 day visit to the San Jose, CA area were two Italian and two Asian.

The first Italian restaurant, La Pizzeria, was a last minute find via Google Map search last Wednesday. Doña Cuevas and two of her sisters had gone on a drive to view sculpture at Stanford University, then to the Henry Cowell Redwoods State Park. Later, I was asked for suggestions for supper. Pizza and salad sounded good to me, so I brought up Google Maps and typed in "Campbell, CA pizza". The results are below. Click "A" for the top hit.

It's but a short drive to La Pizzeria, in beautiful, affluent downtown Historic Campbell. (Historic for having been a center for orchards and fruit drying in the earlier parts of the XX Century.)

The restaurant is small, noisy but smells delicious. In fact, the noise level at the time of our visit neared the threshold of pain, due in a large part to the group of young, merrymaking ladies whooping it up, seated close to the big front window. We could scarcely talk among ourselves, not to mention our very helpful waitress. But we did successfully order a pretty good antipasti platter to share, three thin crusted pizzas and one calzone. 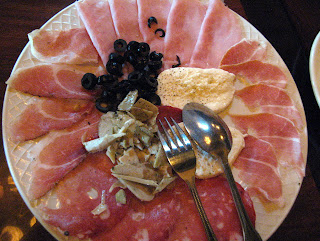 One of our party also had an Insalata Italiana, which didn't appeal much to me.


We subscribed to the "Less is more." philosophy, so the pizza toppings we chose were fairly simple.

The pizzas had thin, but exceedingly chewy crusts. They also come to the table uncut, a bad combination, in my opinion, although my brother in law liked that. THe sauce was simple but good, and in a couple of instances, we ordered pizzas without cheese. I had a taste of the Pizza Vegetariana and liked it. Mine was the Valtellina, which had bresaola,  thinly sliced cured dried beef, arugula and shavings of Parmesan cheese. I drank a glass of red wine.

Younger sister in law said that her calzone was too done, as evidenced by the blackened blisters on the crust.

Here's the final score, from my viewpoint.

Next episode: Tigelleria Organic Italian Restaurant. A very different sort of Italian restaurant, only a few blocks away, but also NOISY!

If you happen to pass through San Diego, check out the carne asada burritos at almost any neighborhood "taco shop", usually called Humberto's, Roberto's, or Filiberto's, etc. Usually they cost about 4 dollars and are made of guac and meat in a flour tortilla. And they're BIG!

Lorie, we pretty much stayed in the SF Peninsula and the South Bay Area. So no San Diego for us.

I try to avoid eating Mexican food when in the U.S., especially in California. After all, we live in Mexico, and Mexican food is ubiquitous here. (I might also say it's sometimes monotonous.)

So when we are in the SF Peninsula and South Bay Area, I seek good Asian food, especially Chinese and Vietnamese.

Now that we are back home, I'll try to catch up on blogging and write about those restaurants. But next, Tigelleria.

Street view car?! Amazing. I wondered how they did that. Had no idea.