California Dining Part 3: Are You Tigellish?

Do you enjoy tigelling? What, you may ask, are tigelle? Here's a nice description, from the website Mangiandobene.
They are similar if not identical to piadine, something a bit like crumpets without the holes, or pikelets, but not sweet. They are pleasant but bland and are best with boldly flavored meats, cheeses or spreads, such as these below.

I must back up a bit here.
While doing preliminary dining research for our California trip, my brother-in-law sent us a list of suggested restaurants that he and my sister-in-law had enjoyed. Near the top was Tigelleria, billed as "an Organic Italian restaurant."


I downloaded the dinner menu (PDF file.) and was impressed by their unique and creative approach to Italian cuisine. There's also a lunch menu, buffet style, for $20; but it impressed me far less. It looks heavy with breads and pasta, not to mention other carbs. While I love both bread and pasta, I'm reluctant to order the latter in restaurants, as I can make at home most pasta dishes very nicely, grazie.


I spent a great deal of time parsing the menu, separating the wheat from the farro from the polenta.


I firmly rejected the lunch buffet as an option, which I felt would be a serious lost opportunity, due to the limited selection compared to the dinner menu. I narrowed down my preferences on that dinner menu to these tentative options:

Antipasti
1. Ravioli al Gorgonzola (although I have some doubts as whether this is a true ravioli* (see “brisee” crust), it seemed unmissable.
*It is not.

2. Gelato al Peperoncino. May be sharp and tart. Could be better as a palate cleanser between courses.

Insalate e Minestre
Nothing calls my name in this category, with the possible exception of Insalata Tre Venezie. (see menu).

Primi
Maybe Panzerotti in Tricia. But if I will have had ravioli as an antipasto, I probably wouldn’t want it again in the same meal.  Generally, I don’t order pasta when dining out. It's too easy to make most pasta dishes at home. I understand that half orders of pasta can be ordered as an appetizer or a side dish.

Secondi
This is one of the most interesting sections of the menu, and there are more difficult but pleasurable decisions to be made. (Please refer to the restaurant's PDF menu for descriptions.)

1. Cinghiale al Forno**. Looks like a winner, if not cooked too well done. (dry, lean?)

2. Petto d’anatra all’arancia. Could be great, or could be just another take on duck a ‘orange.

3. Tagliata alla Salsine. Very tempting, but in general, I do not want my steaks to arrive presliced. The bell peppers, although I like them, seem a jarring note.

Seems almost unmissable, but sliced meats and cheeses, no matter how high quality, do little to show off the skills and creativity of the chef. I suggest this as a shared appetizer. The Stella Alpina assortment looks outstanding. Or, order a cheese assortment for dessert to share. The dolci/dessert menu doesn’t really excite me much.

We left our choice of wine to when we ordered our food.

Tigelleria is surprisingly small, and it was wise to have obtained a reservation, especially on a Friday evening.
The interior is cozy and homey, if your home had an extensive wine "cellar" lining the walls. 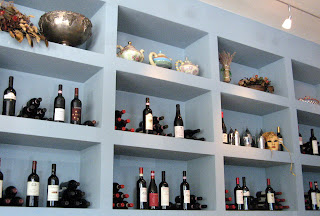 The coziness eventually became a disadvantage as the tables filled and the noise level grew. Not as bad as at La Pizzeria, but still excessive.


Some diners took advantage of sidewalk dining, thus trading the noise of the dining room for that of light traffic. (Faces have been obscured to protect privacy.)
We began with two orders of the Ravioli Al Gorgonzola, which were nice and warm although the Gorgonzola component was elusive. A walnut conserve underlying the "ravioli" (really mini empanadas) was a highlight.
R&J shared a Gazpacho, which R especially liked. I had a taste sample. It was a smooth, emulsified style of gazpacho, and while it was perfectly balanced in tastes, it lacked the crisp and crunchy bits of vegetables to which I'm accustomed.
I started with the Gelato de Pepperoncino, served cupped in a shell of caciocavallo cheese and a bed of arugula. This was the most creative dish of those that I tried. The chile component was just enough to add a gentle piquancy, balanced by a mild sweetness, and counterpointed by the bite of the arugula, with the salty cheese as a foil.
(I can't believe that I wrote that last sentence.)
We also had the S.P.Q.R. cutting board. It consisted of mostly  excellent salume and cheeses (the ham shown on the left was pretty bland) plus some unusual spreads and conserves. Eg; fig conserve, reduced balsamic vinegar, sun dried tomato pesto. This is where Tigelleria excels: it takes what would be just a nice platter of antipasti, and adds value and unique, contrasting tastes with the spreads and conserves. Of course, there were plenty of warm tigelle to go with the antipasti.
Choosing a wine was a giant leap upward into what I consider the wild blue yonder of pricing. We were given free tastes of a couple of wines, and agreed to buy a Valpolicella at, if I recall correctly, $68. Believe me, we made it last sip by sip, until the last of our main courses were eaten.

Yesterday at home, I opened a $60 peso bottle of Spanish 2000 Finca del Mar  Cabernet  Sauvignon, that was, in my opinion, every bit as good as that expensive Valpolicella at Tigelleria. But I'm not a weinschmecker.

Our Main Courses
Doña Cuevas requested the Tagliata alla Salsine. This was not bad, but the meat was not tender and the three accompanying condiments uninspired. The potatoes were o.k., but nothing special.
Compared to a somewhat similar dish at El Rincón del Sol, in Tonalá, Jalisco, México, it was a distant second place runner up.
J. ordered the Spige di Cinghiale, which were very attractive. They are a sort of ravioli, filled with a boar ragout and covered with a sauce lightly enriched with cream.
W. asked for the Petto d’anatra all’arancia. She was aghast when it arrived screamingly rare. She sent it back for further cooking and when it returned, it was still bleeding. On the third try, she sliced it before sending it back and that time it came back well done, as she likes it. I had a taste of the sauce, which unlike usual duck a l'orange was neither sweet nor caramelized. Duck breast cooked very rare may be the way it's supposed to be done, but not to W's taste, nor to mine.
R. got a fish dish which bore a strong resemblance to filete de pescado a la Veracruzana, but without the chiles: Orata alle Acciughe. A filet of orata with tomatoes, capers, olives and anchovies, although the anchovies were well blended into the whole. R. said it was markedly salty, but it was offset by the Milk Potato block alongside. Milk Potatoes are a sort of scalloped potato dish, in which thin laminae of potatoes are cooked in milk. Could be the same as Gratin Dauphinoise, in disguise?
What did I have? I'd decided in advance on the **Cinghiale al Forno; filet of organically raised boar, wrapped in pancetta; stuffed with a rosemary and olive mixture, served with a shallot and carrot puree, and "roasted chestnuts". One chestnut, but that was probably sufficient. 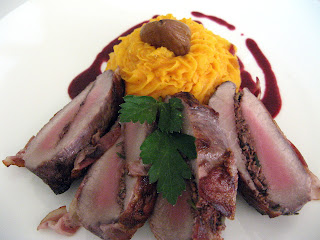 It was cooked perfectly medium (pink center but not sangriente) and very enjoyable, but I wished it had more of a sauce or demi glacé to accompany it.


I don't recall much about desserts, other than this dense Chocolate Torte with Strawberries.

Yes; R&J shared a Chocolate Mousse which was deceptively humble in appearance, but comprised of smooth, intense chocolate accented with the exciting taste of finely cut candied orange peel.


I also had a surprisingly poorly made café espresso.