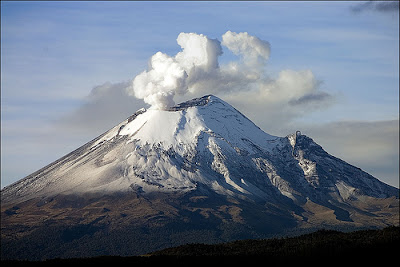 There were rumblings from below and above. Mexico City had been shaken by earth tremors and now, Popocatéptl was spewing ashes and lava. Despite these ominous signs, we were drawn like moths to the flame. Our fervor for specialty cooking ingredients could not be extinguished. Once again, our supplies of vital ingredients, such as Pimentón de La Vera, Basmati and Jasmine rice, and not the least, my more than 10 year supply of whole nutmegs had dwindled to mere nubbins.

A trip to Mexico City was needed. The ingredient shopping was a pretext for dining in some interesting restaurants. We had an extensive lineup as usual, and it was a pleasant challenge to make our final choices. One goal was to find a great paella, of which, more later.

Thursday, April 19, 2012
We left Pátzcuaro on Thursday morning aboard an Autovías luxury bus. We arrived at our hotel by 4:30 p.m. After a sort rest, time enough to settle in, we decided in favor of a late afternoon meal at El Hueqito, Calle Bolívar 83, Centro. The much closer Tacos Xotepingo had been considered, but the nod went to El Huequito. Just as well, too, for on a walk the next day, I found that the Xotepingo location on Av. Balderas, corner of C/ Marqués Sterling, was an empty shell. The carnicería to the side, bearing the Xotepingo name is still operating. So is the raunchy and run down looking Cine XXXX next door. I didn’t look inside.

We walked to El Huequito where we obtained a table toward the front. I had for some time been enamored of the Tacos Ingleses, but on this and a previous visit, the sliced filet steak tacos, seasoned with Worcestershire Sauce, seemed to be lacking savor. Additionally, the price had risen to $40 pesos per taco. 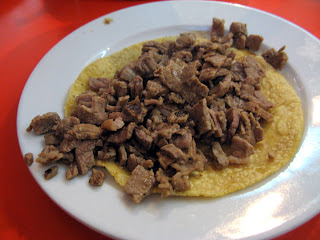 Doña Cuevas had the Ensalada Huequito, consisting of watercress, bacon, tomato, walnuts and the possibly balsamic vinegar based dressing on the side, $70 pesos. 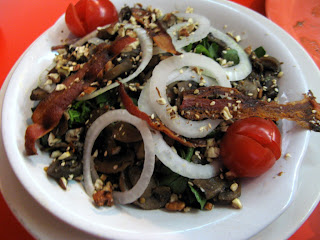 After the slighly disappointing Tacos Ingleses, we had some very good Tacos al Pastor, the specialty of the restaurant. These are about $11 pesos each.

Not sated, despite bowls of the excellent Frijoles de La Olla, we went on to share some good Tacos de Cochinita Pibil. (these were bested by some panucho de cochinita pibil that we ate later at Restaurante El Bajío, Azcapotzalco).

Food: ***
Service: ***
Price: $$+ I no longer consider El Huequito an inexpensive restaurant. Our bill, including drinks, was in the range of $700 pesos.

On Friday morning, we walked from the Hotel Pal to a favorite coffeehouse-restaurant, La Piccolina, on C/ Luis Moya at the corner of C/ Marqúes Sterling. We were mildly dismayed to see it totally packed with people from a tour bus. This was surprising, considering how tiny the restaurant is.

So we backtracked to a coffeehouse we’d seen on our walk back the evening before. This place turned out to be so ordinary, it needs no further mention.

We retraced our way to Calle López and the Mercado de San Juan de Arcos de Belén. I had read in Nick Gilman’s post “A Culinary Stroll In the Centro Hístorico”, on his blog, “Good Food In Mexico City” that four blocks of Calle López, was filled with wall to wall budget eating places.

It was true. After a brief stroll through the mercado (not to be confused with the more famous, gourmet heaven Mercado San Juan, not far away), we ended up at El Paisa, specialists in Caldo de Gallina. A good bowl of “hen soup” will satisfy you for hours to come. Diners have their choice of pechuga (breast), pierna leg), muslo (thigh), rabadilla (aitchbone), and the exotic huacal (the hen’s internal “egg crate”, complete with small, shell less eggs.) 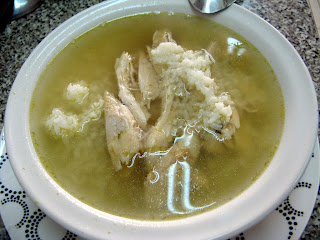 All three of us chose una cuarta de pechuga, which more than satisfied us. The meat was boneless, a further plus.The soup, accompanied by freshly made tortillas and carrying rice and garbanzos, was very good. There were several salsas and condiments to heat things up.

The price is right, too: $29 pesos a bowl, if I recall correctly.

Not far beyond El Paisa is the notable Ricos Tacos Toluca, at the corner of C/ Puente Peredo and López, close to C/ Aranda. We peered in, but we were so full that we had to postpone sampling the famed embutidos until the next day.

Just another block, north on Arandas, to La Molinera El Progreso, where the ever patient Sra. Mercedes filled most of my extensive list of ingredients. I did discover that the Basmati rice sold by El Progreso is instant! I had to reject it.

Well laden by this time, we went around the corner to Plaza San Juan, across which we entered the leading Asian food store in the area, El Dragon del Oro. It wasn’t long before Ron pointed out Jamine rice. But it was in 25 kilo bags! Over in a corner, to the right of the checkout desk, tucked away on a self were bags of both Basmati and Jasmine rice. I stocked up on these and a few bottles of specialty soy sauce.

To end the morning’s activities, we made a loop through Mercado San Juan, where we did get some Pimentón de La Vera, picante, some in VERY LARGE cans, but we had one half of the pimentón equation solved. We also bought some nice, but pricey heads of garlic from the talkative old garlic vendor just inside the door.

After this, we walked back to the Hotel Pal, where we rested and awaited the 4:00p.m. reservation time at El Cabrito Astur.