Our quest for great paella in Mexico City had led us on a winding path. I knew of at least three restaurantes in which we'd eaten previously that served paella (but we hadn't had it.). The most prominent was the Casino Español, a most likely candidate. There were two seafood restaurants that I knew had paella: Boca del Río and Ostionería La Morenita.

After inquiring on ChowHound.com, I decided to forge new paths to paella. A great deal of Googling unearthed Casa Rosalía, "La Casa de La Paella", at Eje Central 3 Lázaro Cárdenas #46, Centro. We'd walked by this restaurant innumerable times without realizing it existed. Jorge Pedro recommended it. But when I found its website, the menues del día* spoke to me of large meals but perhaps of not great quality. The quest went on.

*Offline at time of posting.

Then El Cabrito Astur, Calle Palma # 40, Centro, appeared in the Google search results. On closer investigation, it was revealed that this was the former Bar Sobia, which had been recommended to us eight years ago by a retired Banamex Director, who worked across the street in the Mother Bank. His recommendation was for the cabrito asado, without mention of paella.

The location, in a cellar, was a plus in favor of making it our final choice. This photo of "Paella Cantábrica" didn't hurt, either.

The cabrito asado was tempting, too.


We had a reservation for 4:00 p.m., which probably wasn't necessary. When we tried to get a cab outside our hotel, the rush hour was in full spate and we were unable to get a ride. So we walked the mile or so at a brisk pace, arriving only 15 minutes late. No problem.

Descending the mirror lined, half spiral stairs into the dining room was fun. It's a relatively small space, cozy and appealing. 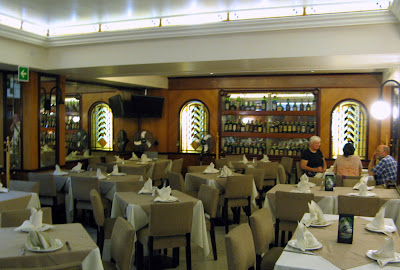 The Maitre D' was affable and helpful. Our waiter was attentive. We chose a Spanish white wine. (Vino blanco Codello says the ticket.) There were complimentary cups of caldo de camarón and little toasts of ordinary pan baguette covered with a garlicky tomato crush.

As aperitifs, two of us drank Dry Sack sherry and one a Dubonnet.

We ordered two orders of cabrito and three of paella. (We were anticipating the arrival of a mystery guest.) The paella takes up to an hour to cook but ours appeared in less time.

First, though, came the cabrito. One order was of pierna, the other of espaldilla. They were flavorsome and moist, although the first pieces I sampled were very bony. Ron especially liked it much better than what he'd had at El Regiomantano on another occasion. Interestingly, the cabrito was served on the inexpensive pottery typical of Lake Pátzcuaro.

The paella arrived in its earthenware paellera. It was good looking but not as good as the photo from the website. The prawns were large, the clams were few, the mussels o.k., the chorizos mediocre. The rice was nice, but underwhelming. Overall, we found it lackluster. Perhaps our expectations had grown too great.

As we neared the last prawn, our Mystery Guest arrived. We had a pleasant conversation with her over some shared paella.

We said adios to Lesley, and went on to order dessert.

The Tarta de Santiago, an almond based, flourless cake, brings back memories of Santiago de Compostela, Galicia.
The Tarta served at El Cabrito Astur was passable, but its texture was more like a thick pudding than the one we had in Santiago.


Doña Cuevas abstained from dessert but Ron went all out and had an elaborate flan with ice cream, covered in rompope.

One decaf coffee and an Anís Cadena, and a bottle of agua mineral completed the meal.

Can't think of any reason other than no one cares for Paella here enough to have it available as a specialty all the time at a joint that is known for it, like you would find in Spain. There they are abound like Starbucks are in the states...

Tancho; the restaurants we considered for paella have it on their menus all the time.

When we were in Spain, Fall, 2002), many restaurants had paella sidewalk signs that looked suspiciously as if they had all come from the same supplier. On that basis, and that there was so much else to eat (tapas, seafood), we never had any paella while in Spain.