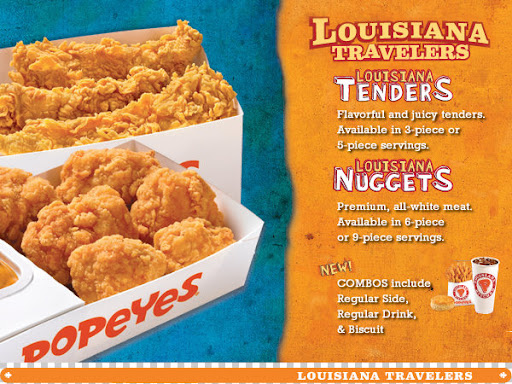 As my dedicated readers know, we are fans of Popeye's Louisiana Kitchen, as described in an earlier post, The Popeye's Caper. I recently got a hankering for some of Popeye's Fried Chicken Tenders, mashed potatoes with Cajun Gravy, but, unfortunately, there is no qualifying airport nor mall store near us.

So I decided make my own. Of course, you can find any recipe that you want on the Net. Some others you would not want, those, for example, that take a relatively simple lightly breaded chicken breast strip and doctor it with all sorts of packaged cacá, such as in this execrable example. Spaghetti sauce and Italian dressing mix? ¡Gúacala!  I admit, it's for fried bone-in chicken, not the tender strips I was seeking. But the seasoning principle is the same. Then a more precise search for "Popeye's Style Fried Chicken Strips" uncovered this one. It's simple and it works. Thanks, Shannon!

1 lb boneless skinless chicken breasts, cut into strips*
1/2 cup buttermilk
1 t season salt (I used my homemade) **
1/2 cup self rising flour ***
1/2 t cayenne pepper
1/t t season salt
2 eggs
vegetable oil for frying
In a large ziploc bag add chicken, buttermilk and season salt. Turn bag several times to ensure everything is mixed. Marinate at least 2 hours and up to 8. Remove chicken from bag and drain well.
Meanwhile, in a large container with a tight fitting cover, combine flour, peppers and season salt. Set aside.
Add the eggs to a large bowl and beat til blended.
Dip each piece of drained chicken into the egg. Add chicken to flour container and shake well, til chicken is fully covered. Remove and set aside to rest at least 15 minutes. If resting longer, refrigerate.
Heat oil in a large cast iron skillet or frying pan over medium high heat til the oil is very hot. Place the chicken pieces in the hot oil, cooking til golden brown; turn and finish other side, cooking til meat is cooked through.

Remove chicken and place on a paper bag or paper towel to drain.
I served the chicken with beans and rice and buttered buttermilk cornbread."

Don Cuevas' notes on his tweaks and changes:
* Chicken: I had the really high quality, boneless, skinless chicken breasts by Bachoco and sold in packs of three at Costco.

I used a bowl to marinate the strips, for spill safety, rather then a ziploc bag.

** Lacking seasoning salt, I added a small amount of Zatarain's Crab Boil to the coating. Also, not having cayenne pepper, I used Pimentón Picante. Just about the same thing. I though that a pinch of cumin powder would be nice and added it.
(Yes, I realize that some additions may seem to contradict my disdain for prepared seasonings, but after all, I'm only human and a mass of contradictions.)

*** I don't have self rising flour, but I do have baking powder and salt, so appropriate amounts were added to regular flour. To give the coating more textural interest, I also used a small amount of fine polenta, and for a second round of breading, some Maseca harina para tamales, a coarse corn flour.

About buttermilk: I can't get it here. So I substituted whole milk (made, surprisingly, from Nido Leche Entera, a high quality powdered milk, readily available in stores and drug stores. For the tangy buttermilk taste, I stirred in Alpura Yogurt Natural. Be sure to get the sugar free, unflavored, NATURAL type.

The Chicken Tenders and, IMO, some home made mashed potatoes are the anchors of this meal. Shannon gives recipes for beans and rice, which are good choices. I wanted mashed potatoes. Use your favorite recipe. Mine were mashed with lots of butter, salt and white pepper, a little grated nutmeg and crema, the sour cream like stuff so beloved in Mexico. Be sure to use a quality brand, such as Cremería Aguascalientes; Alpura, or Eugenia; not some ersatz crema made with vegetable oil.

The third leg of the meal is a Cajun style gravy. I found a good recipe on the Web.


Popeyes Cajun Gravy
By Molly53 on February 23, 2004
(Thanks, Molly53!)
Ingredients
1 1/2 tablespoons vegetable oil
1 1/2 tablespoons all-purpose flour
4 1/2 tablespoons all-purpose flour
1/8 teaspoon white pepper
1/8 teaspoon cayenne pepper (optional)
1/8 teaspoon paprika
1/4 teaspoon salt
1 (14 ounce) cans condensed chicken broth •1 and •2
1 3/4 cups water
Directions
First, make the roux by cooking the oil and flour for 10 to 15 minutes over low heat, making sure that the mixture browns but does not burn. (Let it burn and you will roux the day.-DC)
Add remaining ingredients, and bring to a boil.
Cook for 10 minutes or until the mixture thickens.

My notes:
•1. Lacking chicken broth here, I'd previously made some genuine imitation chicken stock by cooking some chopped carrots, celery, onions and parsley, peppercorns and a few bay leaves until the flavors are well extracted, about 1 1/2 hours, in 2-3 liters of water, along with 2-3 Knorr-Suiza cubitos de pollo. In an impulsive moment, I also added a generous pinch of saffron threads, which gave the final stock a nice, golden color. Let cool, and strain well.

•2. The secret enriching addition was about 2 cups of giblet gravy, left over from Thanksgiving, by way of our deep freeze. (I know that all of you keep such things on hand, for just the right moments.) You could actually go to the pollería and buy bony chicken parts and the menuditos, or giblets, and work from purely scratch. The giblet gravy enrichment was whisked in after the basic Cajun Gravy reached the proper viscosity.

Such a rich triad of dishes needs supporting side dishes that are bright, light and tart. So we and our three guests enjoyed Oil Free Coleslaw (another day for that recipe.), Bread 'n Butter Pickles (a worthy pickling and preserving project, also another day); Mango Tamarind Chutney, Coarse Shred Lemon Marmalade, and honey from local hives.

But what of the Biscuits?? Angel Biscuits were a must. The dough is prepared a day or two in advance, and refrigerated. You knead only take it out, fold it a few times, cut and bake biscuits. I have given this recipe in an earlier post.


I almost forgot about dessert. There are few desserts more Southern than cobbler. I used a basic cobbler recipe from The Joy of Cooking, but increased the pastry part by 1/4 and the filling by a third. For easy to make filling, I had two types of frozen mixed berries from Costco. They have proved a boon on several occasions when I needed a fruit sauce or dessert. The cobbler was slipped into the oven before the biscuits. Then it was kept warm while the rest of the cooking proceeded. A guest brought ice cream with which to gild the lily. (Sorry, I don't have a picture of this.)

So as not to interrupt the structure of the recipes, I'll summarize the menu and post some pictures below.


Butter, honey, Coarse Shred Lemon Marmalade.
(All the preserves and pickles are made in house.)

I love Popeye's biscuits. My wife has learned to make pretty good biscuits, not like Popeye's but quite adequate.

As a matter of fact, the Angel Biscuits are not like Popeye's. A closer facsimile would be just straight buttermilk biscuits, no yeast.

I will testify to the greatness of this sumptuous repast! I was sooo full and relaxed afterward I could have just curled up on the couch and slept the afternoon away. Thankfully, for my vain attempts at dieting, it is rare I am in reach of such a rich and statisfying meal. :)

That was an incredible meal. I didn't think I'd be able to eat for at least a week afterward, but after reading this blog post, I'm hungry again. I would walk to Las Cuevas just for those angel biscuits.

I would think opting for some fresh chicken bodies there about would be better than that packaged stuff? Being a vegetarian saves me from these choices ;-)

Not surprisingly, we slept most of the next day, with occasional breaks to snack on leftovers.

You should be able to fly on angel wings by now.

Really, the packaged stuff is better. This is pseudo fast food, after all.

Next you'll be telling us that you picked up a pressure deep fryer to make superb fast food for the burg.......
My last trip to Mega I notice that then now carry Panko, noting better than that for universal crispy coating. I tired the Bimbo crumbs and was pretty disappointing. So now I just make my own from the stale bread.
Man those biscuit look good, but then again I would not expect anything less from the baker from Arkansas......

How about opening your own cafe? Of course,you would soon discover why restaurants close so quickly in your burg.

"
Really, the packaged stuff is better" HOMBRE - we are going to have to agree to disagree. ;-)


I know we can agree on celebrating Julia's 100th birthday. Check this out - enjoy!
http://www.youtube.com/watch?v=80ZrUI7RNfI&feature=player_embedded

I think that you must really hate me, don't you, to suggest such an idea.

John, if you don't eat chicken, how can you say which is better?
There are some fairly scrawny chickens, notably of the "pelon" variety, clucking about here. I seriously doubt that they are as juicy and plump, let alone tasty, as a nice, battery raised, hormone and antibiotic, well fed, Bachoco Pollo.

Well I could argue about not having to jump off a bridge.... But sure - you're right. I will give way to fight another day ;-)

Just being my usual helpful self. ;-]