We have had the same GE (made by MABE in México) refrigerator since we moved into our present house six years ago. It's a sweet, refrigerator, with a curvy, almost feminine look. Once I removed most of the silly accessory trays, such as the one for holding beer and soda cans in a horizontal position, and the nonsensical "Ice Factory", it served us pretty well.


The drawback was its modest interior space. At just 13 cubic feet, it was difficult to store all the fresh foods, opened pickle and sauce jars, Asian and other condiments, and especially hard to dig down through the tangled masses of mysterious vegetation in the "crisper" drawers.

For several years I have been looking for a fridge with a greater capacity, yet uncomplicated by such doo-dads as water dispensers, ice makers, digital clocks, Hyperspace drive digital controls and iPod docks. (I made up the latter two features, but they may be available.)
I also needed a simple interior design in order to effectively use the inner space.

Last month, Costco Mexico's coupon book featured a 20.5 cubic foot, stainless steel front, Frigidaire without the above unnecessary accouterments. The big draw was a $3000 peso discount. I went to look at it about 2 weeks ago and was impressed. The interior is simple and relatively uncluttered. The accessories are limited to a cheese and cold cuts drawer, not as wide as in the old GE, but deeper in both senses of the word.


The three shelves on the inside of the door are deep and well spaced. Except for a modest butter compartment, there were no gizmos to consume valuable space. I was dubious about the durability of the "retainers", if that is the word, of the door shelves. While the bases are molded plastic, the retainers seem like flimsy material. I was able to overlook this and hope for the best.

The freezer compartment also fit my criteria. It has one rubber coated open metal shelf in the main compartment and two nice, full length door shelves.

After taking a perfunctory look at a small beer fridge at Emilio's Grill at Plaza La Huerta Gastronómico in Morelia, we rejected that option for various reasons and returned to Costco to place an order on the Frigidaire. The discounted price is (and this is good until September 9), $8,499 pesos. Delivery charges apply out of Morelia. That was quoted at $1020 pesos, no, my error: $1200, but later reduced to $900.

Again we dealt with the Atencíon a Negocios desk. Sr. Israel Parra is our very helpful man there, but his associates were also helpful.

We arranged a Wednesday morning delivery, and as promised, the truck arrived. That it was an hour late is meaningless. 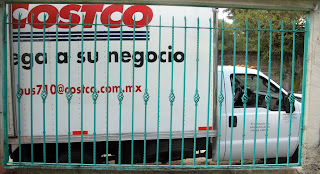 I'd already prepared the area for the new fridge by moving the old one into the dining room. I also had to dismount a small shelf that hangs in the narrow portal to the kitchen. I even cleaned the wall and floor!

They unpacked the fridge out on the porch and once inside, removed the remainder of the packing materials, such as foam pads and plastic film. They also attached the door handles, for which I was grateful. I had only to take off a few tapes before washing the insides with bicarb in tepid water, then drying it with a kitchen towel.

It was necessary to let the fridge repose four or more hours before plugging it in, and letting it cool down another four before putting in any food. I did the transfer at about 2:00 a.m.

It seems to be running fine, and after checking the temperature a few times, I raised the dial to slightly warmer. It still runs a lot, but very quietly, with a gentle murmur.

Yesterday I cleaned up the old GE fridge. That was more work than receiving and preparing the new one, but not that difficult.

I am offering the old one to sell, asking $3000 pesos. We will consider other offers. It's in good shape, with all its parts, but has some damage to a panel in the back of the freezer, but it doesn't seem to affect its operation. This would make a good second fridge for someone who entertains a lot, or a good one to give to your novia en tu casa chica.
You pay and carry away.


SOLD! To our cleaning lady and her family, down the street from us.

A bonus, for your entertainment pleasure:


The Dawn of Man:the discovery of a black, monolithic refrigerator
on the Serengeti Plain.
Posted by Don Cuevas at 5:52 AM

Enjoy. Here in the US I inherited a space-gobbling fridge with an icemaker and dispenser that takes up haolf the space of the freezer. My old Mexican fridge had more space inside and a much smaller exterior volume.
So much for "convenience."

your new fridge looks much like mine, except white! I too eschew the frippery of modern fridge design, it's space I need, lots n lots of space. Big difference in our usage, the entire bottom shelf of our fridge is dedicated to ice, bags, bowls and trays, we likes our ice!

You're a hoot. A whole post, and not a short one, on a freaking fridge. Well, it does look like a nice one. We bought a new fridge not too many years ago, not so much for space but because it has the freezer down bottom where it should be. Why do they almost always put the fridge, which you use 90 percent of the time, down bottom, and the freezer, which you use 10 percent of the time, at convenient eye level? One of life's mysteries.

Practical wisdom derived from real life experience can be gleaned from those who want to pause in navel gazing in their hammock.