A Sunday Comida With Steve Cotton

Last Sunday we had the pleasure of receiving Steve Cotton at our casa en el campo.

Of course, we wanted to have a nice, well balanced, home cooked meal to offer him.
Earlier, I'd given him a a choice of main courses: either salmon fillets or Carbonnades a la Flamande. He chose the Carbonnades.


~This is the menu I planned~

I think all was quite successful, with the exception of the spinach, which didn't work well with the chosen seasonings. It also had an unattractive color.

Below is  a sample guideline, not a recipe, for the soup.

The Roasted Red Pepper Soup was from a recipe in The Quick Recipe, by the Editors of Cook's Illustrated Magazine. It's on page 174. It's made with a 24 ounce jar of roasted red peppers, drained, some red onion, garlic and flour.

The onion and garlic are sautéed lightly in butter and vegetable oil and then, 1/4 cup flour sprinkled over. A 1/4 chile chipotle in adobo is added and some thyme leaves. This is then cooked a few minutes to rid the flour of rawness.

Then 3 1/2 cups of canned chicken stock (or better, homemade) is added and the mixture brought to a boil, then reduced to a simmer.

Meanwhile, bread is made into croutons. They used white sandwich bread and melted butter; I used crusty bolillos from a small, wood oven Morelia bakery. I applied just a few drops of olive oil and baked them 12 minutes or until brown and crunchy.

Back to the soup: I had on hand about 2 1/2 cups high quality juice from a can of Cirio Pomodori Pelati, left over from pizza making. I added it to the soup. This addition made the soup thinner, of course. I didn't want to thicken it with a beurre maníe (thus further enriching the soup to excess.), so I took some toasted almonds, seasoned with salt and pimentón de La Vera (a leftover from the Paella Feast), processed them rather finely in the Cuisinart, and added about 3-4 TBSPS to the soup.

After tasting for seasoning (and, I recall dashing in some pepper sherry), I removed the pot from the stove burner and blended it with an immersion blender for several minutes to thoroughly smooth it.

The original recipe calls for 3/4 cup heavy cream added, but I preferred to omit that and instead garnish each small soup bowl with a couple of croutons, a dollop of crème fraîche and some chiffonade of fresh basil. Take advantage of what you have available, within the bounds of good taste.

The recipe for Carbonnades a la Flamande (beef braised in beer with caramelized onions) was taken from a recipe on SimplyRecipes.com.
See it here.
There are many versions. Some start with bacon. Mine did not. Mine had about 2/3 beef and 1/3 pork, all cut into small cubes by our butcher, Moíses Pérez.  I recommend sticking with all beef, and in approximately 1 " cubes.
Most recipes call for Belgian dark beer. It's hard to find here, so I used Indio, purchased at a local Oxxo store.

A tiny amount of ground mace is an addition I remembered from a recipe of many years ago. The Carbonnades is not as pretty as the soup, but it is rich and flavorful.

The noodles were simply tagliatelle pastas, cooked in salted water, drained, and dressed with a little melted butter and chopped fresh parsley.

Of all our menu, perhaps the beverage was most unusual. Three of us the paella feast had been talking about using more native ingredients in  cooking. Tunas moradas are in season, and with just a little work, it's possible to make this ripe, purple cactus fruit into a refreshing beverage.

I found various methods on the Internet, and worked out one for myself. I'd bought 1.5 kilos of tunas moradas, and early Sunday morning, peeled and sliced them with a paring knife. (Be sure to wear an apron or old clothes.) I set aside half to puree and freeze, the other half went, in two batches, into our blender with purified water. The blending was easy, but the straining of the puree to remove the hard seeds takes a little while. Sugar is added to taste. I thought that the agua would benefit from the addition of some freshly squeezed lime and some grated lime zest. Then I decided to boost the flavor more with a small amount of finely grated fresh gingerroot.

Here's the result. You can ignore the salt, limes and Tequila as you wish. 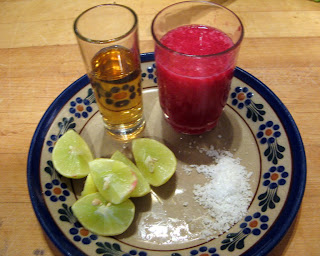 In the European manner, we followed the Carbonnades with a
refreshing salad. Inspired by Georgina's salad at the Paella Feast, this salad also had slices of fruit, apple in place of pear, plus the dried sweet cranberries. The divergence came with the mixture of romaine and sharp, peppery cress (berros) plus toasted walnuts, and dollops of goat cheese. The dressing was sweet and less sour emulsified and with celery seeds. (Poppy seeds can be used, but opinion is divided as to whether they are legal in México.) 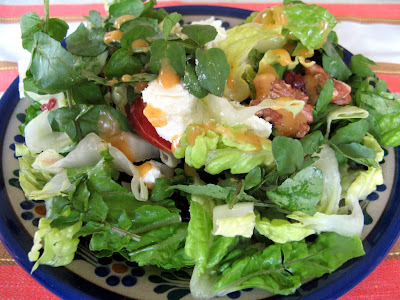 A civilized pause followed, as the interesting conversation continued.

Two friends showed up unexpectedly, and we invited them to dessert and coffee.

The dessert was very easy to make; a Basque version of natillas, a soft, eggy custard sauce scented with cinnamon and vanilla. I'd made it the evening before and portioned out into dessert bowls. I set them in a pan and then covered them with plastic film and refrigerated them.

For a nice touch, which took it out of the "invalid food" category, I thawed a frozen organic berry mix, sweetened it slightly and let it macerate a few hours. A few spoonfuls of the berry mix were added just before serving, and I stuck a fresh mint sprig in as an edible garnish. 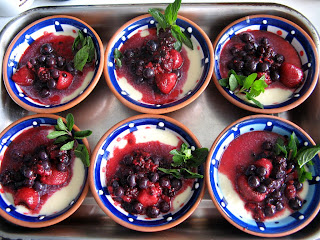 We also had some cookies from Panadería La Parroquia, in Pátzcuaro. 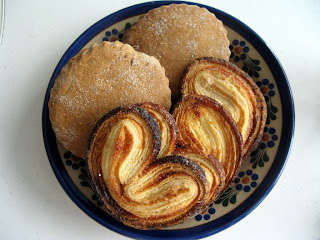 This concludes our program for today.
Posted by Don Cuevas at 12:09 PM

How do we know you're not Mexican? This meal is marked by a complete and total absence of hot dogs and Jello.


Serving the salad after the entree always seems to elevate the status of salad. And it seems elegant -- although more than a few guests have wondered if I just forgot to serve it on time when I've pulled that "this is how it's done in Europe" trick.

An absolutely perfect day. Thank you for letting me be part of it.

I used to use The European Gambit when, in my bakery, the bread came out extra well browned. Let's just come out and say it: scorched. I would say, it's how it's done in Europe. At the time, I hadn't been there yet.

Sounds like a fun day with excellent food and friend. Thanks for sharing.

You are going to spoil Steve......he'll be thinking about that meal while sweating at the beach.....

Oh, by the way, where did you get that great looking lettuce?

Are those "cookies", pastries, also called, orejas, in Mexico. One of my favorite when made well, light and crispy.

Oreja, oreja! Andean is correct! They are "palmiers" in French.

I am now thoroughly spoiled.