We have been recently going to Morelia on medical and other matters. Even so, one must eat.

Yesterday, after stocking up on bakery ingredients at La Frontera, on Plaza Carrillo, at the foot of Calle Abasolo, Centro, we decided to drive up the three blocks to Fonda Marceva. Parking can be difficult in that area, but we were able to gain entrance to the very nice, roofed parking garage on the left, just a half block to the north, just below Calle Aldama.


Our comida at Fonda Marceva was excellent, although the service was quite off hand and very inattentive at first. But once the two waiters got going, the service improved.

I was without my better camera, so all I could capture were two inferior photos with an LG cell phone. I do have better photos from earlier visits. I think the comparison of the dishes is interesting.

Fonda Marceva specializes in comida de la Tierra Caliente, from the region of Huetamo. We had been there a couple of times before, with varied results. This time it was very good.

THe weather was nice, so we ate next to the patio, instead of inside the rather somber dining room.

The soupy beans are illustrative as to how simple, but well prepared food can be so highly satisfying.

We ordered as follows: Doña Cuevas had uchepos, or sweet corn tamales. These were more finely textured that those at La Mesa de Blanca at Ziracuaretiro, but equally good. In their fresh, green corn husks, they were beautiful.

I had toqueres, "pancakes" of roughly ground corn, resembling nothing as much as potato latkes. The deep bowl of thick, rich crema adds to the resemblance. I can imagine these with some smoked salmon or caviar. The crema was also perfect, spread onto a warm tortilla, plus some salsa verde or a tentative nibble of the raw chile. 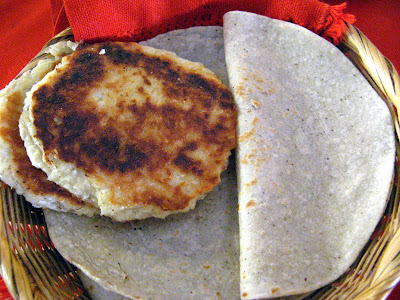 Sra. Cuevas continued with an attractively presented bowl of Sopa de Habas (Fava Bean Soup), with sprigs of cilantro floating in it alongside fresh tomato slices and one, picante fresh chile verde.

For a main dish, I had the memorable Frito, a sort of carne adobada of pork ribs and/or backbone, which may have been slowly baked, not fried, in a concentrated adobo sauce. Lightly pickled raw onions garnish the top. On a previous visit, the Frito had much more jugo and I think it was better. Yet this time, it was heavy but delicious stuff.

We passed on the desserts, which from the table tent advert appear to be factory made, but I can't swear to that.

We drank a pitcher of tart and refreshing agua fresca de tamarindo. I started with a mezcal, sharp and potent, and ended with a café de olla, which was undistinguished.

The bill came to $276 pesos, plus a tip. I consider that very good value.


View Larger Map. Zoom in for details.
Posted by Don Cuevas at 5:22 AM

Put enough red sauce on a plate and even carne looks good ;-) Thanks for the report.

About a year ago, we'd hoped to eat there with our friends, Brenda and Richard. But Brenda is a vegetarian, and there's little on the menu that would fill her needs. Maybe the uchepos or toqueres, but they may be made with lard. They never got to go there, for other reasons.

Christina Potter highly recommended the place. And you have just added to my desire to eat there. If my stomach settles down, I may drive over to Morelia for lunch.

I think it would present a strenuous challenge to your stomach, even under better circumstances. I had minor symptoms last night, of indigestion, and this morning, of the - a-hem- "afterburner effect".

HI hope you can help me, I am looking for details on mexcian food - what people normally eat for breakfast, lunch and dinner! can you help? THANKS, Michelle m.tchea@gmail.com

Michelle, that's kind of a broad and deep assignment. I think that you would be better off reading a book on Mexican Cuisine. or visiting other Mexican food sites. (Mine is less about Mexican food than it is just eclectic cuisine.)


And you can read the blog of my fellow blogger, Mexico Cooks!, who has much mire expertise in the subject than I. http://mexicocooks.typepad.com/