We used to go more often to Mariscos La Jaiba, on Blvd. García de León in Morelia. But somehow, it fell off our radar. Overall, the food is good, but the prices are higher than those in other marisquerías. Our Gold Standard, of course, are the Mariscos La Güeras in Pátzcuaro.

We were in the neighborhood of La Jaiba yesterday for a medical appointment, so we decided to lunch there. Although the main entrance is on Blvd Garcia de León, there is free, shaded parking accessed by Calle Batalla de Casa Mata at the rear.


The door from the parking area takes you through part of the kitchen and past the clean rest rooms, and by these attractive garnish plates, ready for service. 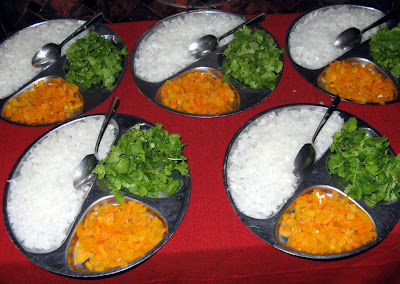 We were seated by our soft spoken waiter and brought a basket of surprisingly decent bolillo, crisp, non greasy tostadas, and the requisite galletas Saladitas; plus limes, serious salsa and seasoned mayo. 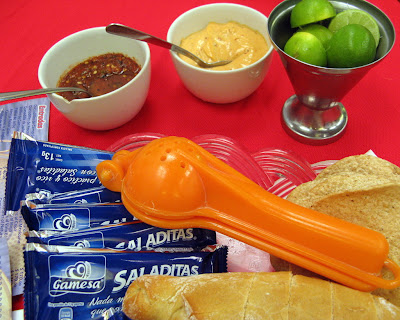 Then a somewhat unpleasant surprise came, when our waiter quietly informed me that photography of the food was not permitted. I could only speculate as to the reasons for this prohibition. But he invited me to photograph the seafood display on ice in the front dining room. I wasn't impressed but I acquiesced. 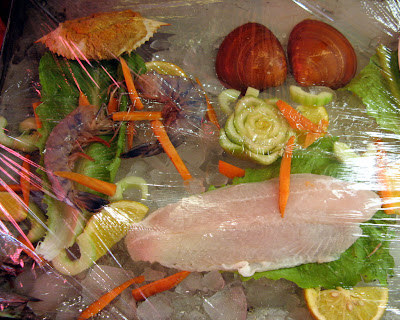 After I recovered my aplomb, we ordered. I started with a warm tostada de marlin, which was very good, as the guisado de marlin was in small dice instead of shreds, and the seasoning was perfect.

For drinks, Doña Cuevas had an agua mineral, as the aguas frescas choices were limited to limonada or naranjada. I had a michelada con Clamato. With the arrival of the drinks and their serving, a certain stuffy, formal style of serving emerged. Our waiter asked us if we would permit him to pour the drinks. A nice touch, maybe, but a bit pretentious for a marisquería, I think. The michelada was excellent, served in a beer mug from which a celery stalk emerged, but did not come with any shrimp. Later I saw two women drinking micheladas in chabelas (goblets, complete with shrimp.) Later, I had another cerveza sencilla y sola.

Doña Cuevas ordered Brochetas de Camarones, which she had enjoyed at La Jaiba on previous visits. In the past, it was an attractive pair of skewers with alternating large shrimp, onion, sweet peppers and bacon, capped by chunks of orange. This time, however, it arrived skewerless, and judging by the higher than average oil level, had been sautéed, not broiled. It was, however, a tasty if less attractive mess. It was accompanied a variable salad of shredded jícama, raw beet, etc, and the truly not photogenic plop of gross looking Ensalada Rusa. She skipped the Ensalada Risa Rusa, which has to rank among the least appetizing salads ever invented. Her platter also held a few pale French fries and some insipid rice.

I chose Huaguachil de Camarones Grandes, "Huaguachil" is apparently a variant spelling of "Aguachile(e)". It takes about 20 minutes to prepare, as the shrimp are "cooked" in fresh lime juice, afterwards served with diced cucumbers and garnished with a few rings of purple onions and some slivers of avocado.

It was really quite good, tart, picante and refreshing, but it now occurs to me that if I chose camarones grandes, for more money, instead of camarones chicos, what did it matter, if the shrimp were cut into small bits anyway?

We were both quite stuffed by meal's end, and no room for any of the desserts offered on a tray. From past experience, most of the desserts are easily skipped without regrets.

The final cuenta was about $433 pesos, an remarkably high figure for two people, but we were aware when we ordered, that our platos fuertes were about $175 or more each.

Since it has been a few years since I last reviewed La Jaiba, I'll update my ratings. I'll try to be fair and overlook the no photos rule. No, its ridiculous!

Food: *** Greater attention to details would be welcome.

Service: *** Kind of stuffy for a basically informal place, but more than adequate.


Special plus, to their credit: free wifi, and no password needed! This feature goes some ways to canceling my grudge about no photos. If only other restaurants, and especially Starbucks, would remove the absurdly challenging barriers to logging in to the Internet.

I do have a few photos, taken on previous visits.

You can't photograph your freaking plate? I would have left without ordering.

That's what I understood. No photos. Maybe they feared that someone might steal the concept of cocteles de mariscos. Or imitate their unique decor.


Under some circumstances, I might have gotten up and left, but we were under some constraints and it was handy to our doctor appointment.


My wife thought that the waiter was just telling me that I could take photos of the seafood display. But I double checked. I it was clear to me that I was in a Highly Classified Security Zone.

I would have gone a step further than Felipe. I would have left and not written the post. But it is now on my "do not eat there" list. So, I guess the result is the same.

The "Coctel Vuelve a la Vida," looks good. Is there a reason for the name--come back to life?

Imagine, Andean, that at Mariscos El Pescador, also in Morelia, they feature not only a Coctel Vuelve a la Vida, but also a Coctel "Viagra".
Food for thought, or something.

Steve, try Langostikos, on a busy day, like Fri, Sat, Sun. Get the Sopa de Ostiones. Avoid the elaborate filetes de pescado. Some of their cocteles de mariscos are good. Ceviches and aguachiles look worth trying. Last few times we were there, photos were allowed.
It's on Av.Vicente Santamaría, Morelia, a couple of blocks north of Av. Camelinas.


That's about 8 blocks north of Horno de Los Ortiz. JJR can explain about that.

well, sorry to you that you found my writing 'turgid and pretentious' on my Mexico City Metro blog. Can't please everyone, I'll be looking through your work to see how it should be done. http://mexicocitymetro.wordpress.com/

That's a new one, for sure, now that it's been put forth, don't think it has to be thought of, too much...

We all have room for improvement, Peter. My earlier blogs now seem turgid and pretentious to me. It's a work in progress.


Read the Unseen Moon, by "Felipe Zapata", but avoid his political rants. He's one of my models, although I don't try to imitate his style. His writing is spare and clean.

Señor Cuevas: I do not "rant." I do, however, concisely point out the errors of some political attitudes and what can be done to improve them. After Nov. 6, that type of helpful political post will not be necessary. The nation above the border will have pulled itself from the precipice. Or not. It will be out of my hands.

Felipe, I am permitting your comment because of our long standing amiable relationship. But that is the end of political commentary on this blog.


Let's just say "Felipe's fervid political postings", and leave it at that.

Ah, Don Cuevas, but I was merely responding to what you said. In other words: You started it.

But, no matter. You have inspired me. I have written a post that will appear tomorrow or perhaps the next day on these unjust rant accusations I occasionally face. You are not the only one.

Perhaps "rant" was excessive. But I'm done with this topic.