Christmas Day, 2011. We were driving north from Tzintzuntzan towards Quiroga to have dinner at our friends the Ferguson's house. Just past Ojo de Agua, i noticed a guy standing outside one of the villas, waving a sign that said "PAELLA HOY". That was intriguing, but as we already had a dinner engagement, we didn't stop.

About 2 weeks ago, after eating those gorditas at the Quiroga Mercado, we were returning along the same stretch of Carretera Federal 120, when I saw a sign posted, "Casa Paella". It was still early, so we stopped to check it out. After we hola'ed a couple of times, out came this big man, with a big smile and a bigger heart. He is Mauricio Hernández. His beautiful wife "Tey" (María Esthér) also came out to greet us. Then they invited us into their home.

They told us that they were no longer making paella for the public, but they looked at each other and then said that they could make it for us in a group, with at least 5 days advance notice.

The actual site for the feast would be at the Hotel Lago Sol which Mao and Tey manage for the Moreliano owners. The hotel is just down the highway 300 meters in the direction of Quiroga. It's a lovely, relaxing place.

We all were enthused about this paella project, and after exchanging email addresses, we left.

I knew who might be interested. Our friends Ron, Georgia, the Fergusons, and Mark and Nancy, although they were in Colorado. When I emailed the Coloradans, they were enthused and said that they would try to attend. I invited a few others to participate, but they were unavailable.

There was an exchange of emails between Mao and me, and we determined what the paella would have in it as well as the supporting dishes. The price for the meal was agreed on to be $165 pesos per person, including a salad, the paella, bread if desired and a light dessert and coffee. The beverages would be BYOW. Traiga tú propio vino.

The guest list grew to nine in all when Mark wrote that they would bring a friend, another Nancy.

Sra. Cuevas and I made another preliminary visit in order to pay an anticipo (deposit) of about half the total. At that time we also met Georgina, Tey and Mao's daughter, visiting from Seattle. Georgina took on the responsibility of creating the salad.

The night before the Day of the Paella, the Coloradans arrived in good order to their Pátzcuaro home. All was set for el Día de La Gran Paella Lacustre. (Lacustre: lacustrine. Of, relating to, or associated with lakes.

I wanted to supplement the meal with some botanas or tapas. I restrained myself somewhat, and only made roasted seasoned almonds, toasted garbanzos, and a tapa, baked fresh figs filled with goat cheese and wrapped with jamón serrano.

Doña Cuevas and I drove over to the Hotel Lago Sol early, as I wanted to photograph the cooking of the paella. There we met two friends of Mao and Tey, who live near Zacapu.

I won't describe the cooking steps as it would be tedious to write them, and especially to read.

You can look at the slide show below for more details. Click slide to open in original album.


Mao cooked the paella using techniques and ingredients adapted to and available in the region. Keep in mind that we were on the shore of Lake Pátzcuaro, neither near the mountains of Madrid nor on the coast of Barcelona. See below. In my opinion, the results were very good and highly satisfactory.  Most of all, we all had a very enjoyable afternoon.

The salad was, pleasantly light and refreshing, with mixed greens, dried cranberries, sliced fresh figs and a tart, citrus dressing. That's a slice of star fruit for a garnish.

Here's what the paella contained, if I can recall everything: rabbit, chicken, chorizo, onion, peas, crab, clams, some other smaller mollusk, octopus, large shrimp, saffron broth and the only item I consider completely superfluous: sections of fat salchichas—frankfurter sausages. It's a Mexican reflex, I think, to add salchichas to many foods, but one "Fud" I prefer to avoid.

The rabbit and chicken were less interesting than expected. I think that they had been precooked in water rather than browned in the paellera. But the abundant seafood was very good. We could have up to two servings and that was plenty. We had decided bread was unnecessary. 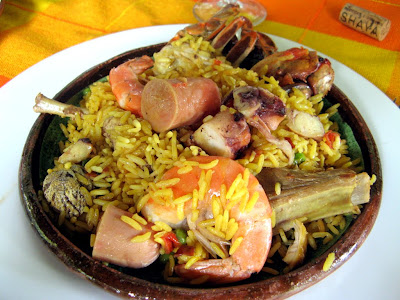 In the end, all was well, and we left, happy, a bit tipsy, very well fed, especially after the two desserts, the first, sliced pear with blue cheese crumbles, and a rich poppy seed cake that Georgia brought. (There were two secret birthday observances, unmentioned to the group.) To my everlasting remorse, I failed to take a photo of the poppyseed cake. But it has now developed into a Special Research Project to find out if poppy seeds are legal in Mexico.

Keep in mind, this is not a typical restaurant, open to the public, with regular meal hours. Paella dinners have to be arranged in advance with Mao and Tey. They will customize your meal according to your tastes.
Prices vary according to how may ingredients the paella will contain.

So, please consider these ratings to be very tentative, and yes, "soft".

Restrooms: Clean and well supplied. The restaurant area is next to a hotel suite and two bathrooms were made available to us.

I once looked at purchasing a house along that stretch of highway.

Too bad you didn't do that Steve, I would have enjoyed visiting you on the weekends......

Passed that rancho many times, thanks for showing me what was behind the big fence. Looks like a nice place to set up a big party with friends where you can just get in your car and not worry about all the details....
I may have an idea.......

Hot dog on paella is just plain wrong, and on so many levels. How did this country ever manage before hot dogs showed up on the scene?