La Romería lies high in the hills of Balcones de Santa María, Morelia, and is high on my list for a prompt return visit.

We had read some enthusiastic reports of La Romería, but hadn't thought much about it until recently. We've been relatively frequent visitors to Parrilla y Canilla close by. But recently, we wanted a change of scene and our friend, Jennifer Rose, suggested La Romería. The fact that the comida was Yucateca in style was a great attraction. In Michoacán we don't get much variation on the usual comida Michoacana, and a change is refreshing.

The inevitable question arises, "What is a romería?" My Ultraligua Spanish-English digital dictionary says:

La Romería is owned and operated by the energetic Chef Freddy Martínez. Freddy will greet you, seat you, take your order, and with his assistant chef, prepare your meal. It's a very congenial and comfortable style of service.

The second floor restaurant, incongruously located above a Subway shop, is small and casual, with additional seating on the terrace. The dining room is small but with a warm and easy ambience. A delicious potato and cheese filled, crisp shelled botana and two salsa picosas come to you on the house.


The menu is divided in two principal parts. The first is of antojitos Yucatecos, such as as panuchos, sopes and salbutes. The second part is dedicated to platos fuertes. 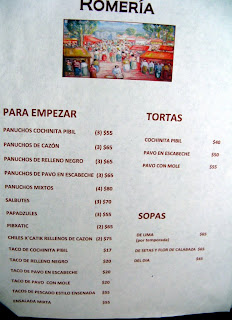 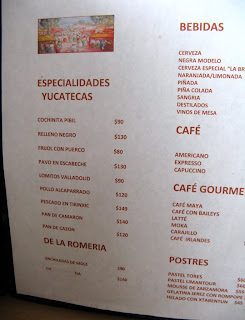 For our first visit, I ordered a mixed platter of antojitos, followed by a bowl of soup. My dining companions, Jennifer, Larry and Sra. Cuevas ordered platos fuertes in addition to sampling the antojitos. Larry had Costillas con Frijoles Negros, a very hearty dish attractively garnished with a fresh relish of chopped radish, cilantro and onion.

Both Jennifer and Doña Cuevas ordered Pescado Tikin Xic, a filet of tilapia given a beneficial flavor lift with an achiote based sauce. The platter was very nicely accompanied by golden brown fried potato slices, pureed frijoles negros, and rings of fresh sweet peppers.

My antojitos were varied, ranging from good to very good. I especially enjoyed the panuchos of relleno negro de pavo, and the pavo en escabeche. The panuchos de cochinita pibil were good, although I wouldn't be as tempted to make a main course of the cochinita. The salbute de pollo was good, but less distinctive.

For a main course, I chose Sopa de Setas y Flores de Calabaza over the house special Sopa de Lima. The sopa was good, but anticlimactic after the antojitos. It was also a very generous serving, and I couldn't finish it.

Platings were simple but attractively done. Chef Freddy has an eye for style.

Drinks were interesting and good, with the exception of the disappointing naranjada, made from a "just purchased" carton of orange juice plus mineral water.

I started my comida with a carajillo, an iced coffee sweetly spiked with some unidentified, delicious spirit. I later had a Cerveza Brü, a local product. This Brü's for Yü. (I had to get that out of the way.) I chose the Ginger Beer variety, which was distinctly hoppy and pleasantly warmed by the ginger undertone, and not at all sweet.

I was the only one of us to have dessert. Their are some elaborate cakes, made elsewhere, but I decided instead to have helado vainilla con Xtabentun. That was deliciously rich, with the honey-anise Xtabentun poured over all.

My café espresso was very good.

Location: J.J.Tablada 565, Balcones de Santa María, Morelia, Michoacán, México. Second floor. Parking is somewhat limited, but there is parking across the street at the upscale complex of stores there. Tel: 233 7000

Jennifer mentioned the place to me when I was in Morelia last September. I didn't have time to eat there on that trip. But it is certainly on my list for my next visit.

La Romeria's cochinita pibil is awesome! And the mole will make you want to lick the plate.

I love this place and have had many enjoyable meals there. Wayne Brewster, his neighbor and friend, introduced me and I am so grateful. I took my friend Christina Potters of Mexico Cooks there and she loved it as well. GREAT place, great chef with passion for his work.

Good to have you here, Rose. We look forward to your future comments.