A Power Breakfast with Cardenal Palma

Years had elapsed since we first breakfasted at Restaurante El Cardenal, on Calle Palma, in Mexico City's Centro Histórico. We had some good memories of that first visit, and less good ones of our comida there at a later date.

But more recently, in fact, on Thursday, November 7, 2013, we again breakfasted at El Cardenal, this time with two of mis cuñadas, who had flown into Mexico City in order to visit us in our Michoacán retreat.

The afternoon before, we had a very enjoyable comida with our friend Sra. LMS at Fonda La Veracruzana, in Colonia Roma. The hallowed halls of El Cardenal, matriz, could hardly be more different than the casual, sunny ambiance of La Veracruzana.

We like the main, original El Cardenal in Mexico City Centro for its air of subdued formality, the stained glass vitrales, the antique curving staircase; the ceremonious pouring of the famed chocolate o café; the offering of the justly famous pan dulce. The sweet breads, the chocolate and the natas (clotted cream) are all made in house.

After the introductory course of rich pan dulce, you may elect to have an egg dish or if truly hungry, one of the more substantial meat based dishes offered on the menu. 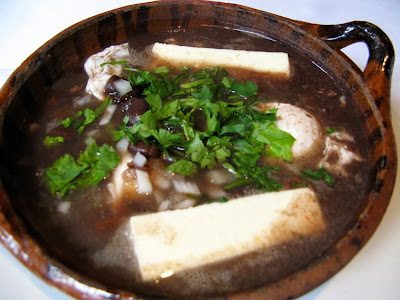 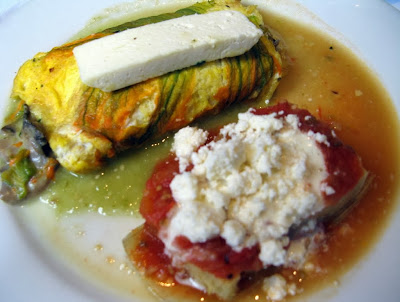 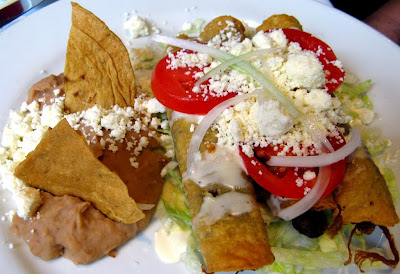 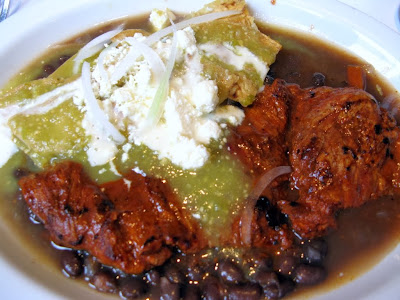 I had Tasajo Enchilado con Frijoles Negros, a substantial dish, suitable to fortify me for the long walking tour which we would continue that day.This was a tender flank steak, in a savory but mild chile gravy; different from the typical, thin, salt-cured tasajo of Oaxaca.

This was perhaps the most enjoyable meal we have had at El Cardenal, nearly flawless, attentive service and very good food.


View Larger Map
Posted by Don Cuevas at 3:10 AM

"Las Tres Hermanas" sounds like a perfect name for a Mexican restaurant!
Your descriptions of the restaurant in DF make me want to go visit them, you are a great ambassador for the tourism department.