Zihuatanejo From Z to O: The Great Santina!

I am a Brooklyn boy, from the Bensonhurst barrio. I had early exposure to Italian immigrant cooking, mainly from our Neapolitan neighbors downstairs, whose kitchen, nay, the entire ground floor apartment was redolent of garlic, wine, herbs and strong Italian cheese. The two sons were my best friends (this was back in the mid-1940s). Living close to them prepared me for other, later food adventures. My first pizza of memory was in a restaurant on 86th Street with a pizza chef statue in the window advertising this exotic Neapolitan delicacy.

(It was there, also, that I had my first sip of the bitter brew, Rheingold Beer.)

"My beer is Rheingold the dry beer. Think of Rheingold whenever you buy beer. It's not bitter, not sweet, it's the extra dry treat—Won't you try extra dry Rheingold beer?"


(For entertainment purposes only)

Oh, yes. Rheingold Beer has nothing to do with pizza in Zihuatanejo; our topic at hand.

Never would I have imagined getting a pizza in Mexico that equalled or surpassed the pizzas of cherished memory. This is not to say that we haven't had good, even very good pizza in Mexico: Pulcinella in Morelia; Rústica in Oaxaca; Macelleria in Colonia Roma, Mexico City. Now Zihuatanejo has perhaps the best pizza in Mexico. I have had only one so far, but indications are that it is destined for greatness.

You can find this pizza at the Café Santina, on Paseo del Palmar, between Calle Los Cocos and Calle Los Mangos, a half a block from the Hotel Fiesta Paraiso and close to the Posada del Palmar. It's only been open about a month. There is no seating; it's purely standup or takeout. The hours of operation are from about 8:30 a.m until 5:00 p.m.

There are several notable things about Café Santina. First, it has some of the best tasting, deep, rich aroma espresso and cappuccino ever. (A small demerit for serving in throwaway cups.)

Second, the baked in house Italian pastries are very good. I have tried only the Torta della Nonna, a wonderful custard filled pastry that took me back to New York when I tasted it. There is also a Chocolate-Requeson cake that was pretty good, although not as great as Torta della Nonna. There were more pastries, but I did not have time to try them. There is a short list of panini, which I didn't try.

After several coffees, and a lively chat with Angelo, the Napolitano owner a man with an opinionated personality, we decided to order a pizza. I was told it would take 15 minutes, and it was ready in that time. I decided to get a "Napolitana", with anchovies and capers. A medium, the only size available, was $110 pesos.

I hurried the box back to the table in the hotel patio. The pizza was beautiful. 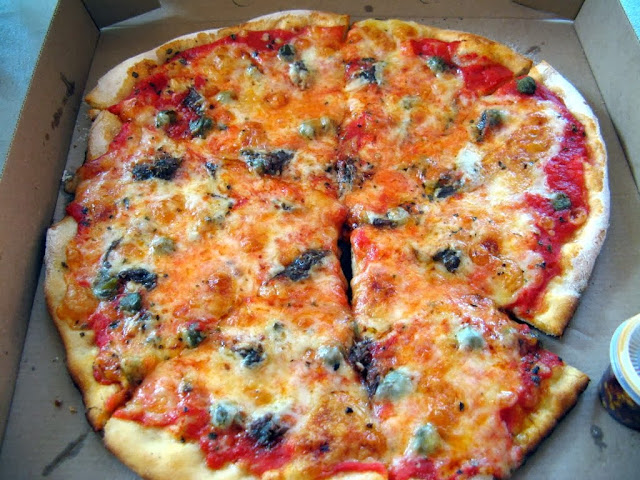 A good pizza has good sauce and toppings, but a great pizza has great crust. This one met that criterion. I'd told the order taker that we liked the crust "muy bien dorada" (very well browned) and my wish was fulfilled. Not only that, but the "sauce" was made authentically, of crushed tomatoes and not much more. 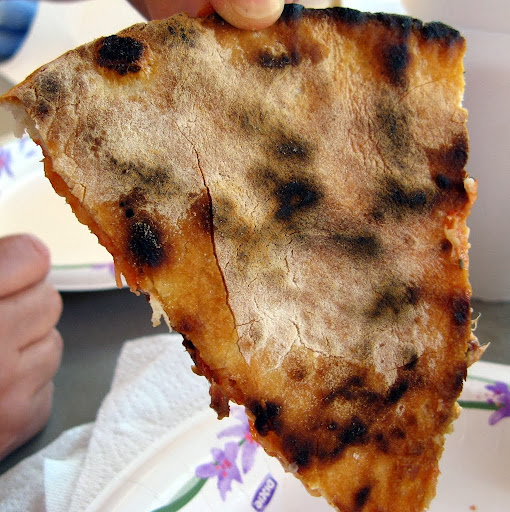 This crust was on a par with the pizzas at Pepe's Pizzaría Napolitana, in New Haven, CT

We ate it on paper plates, with some tangy tomates cherry from the mercado. 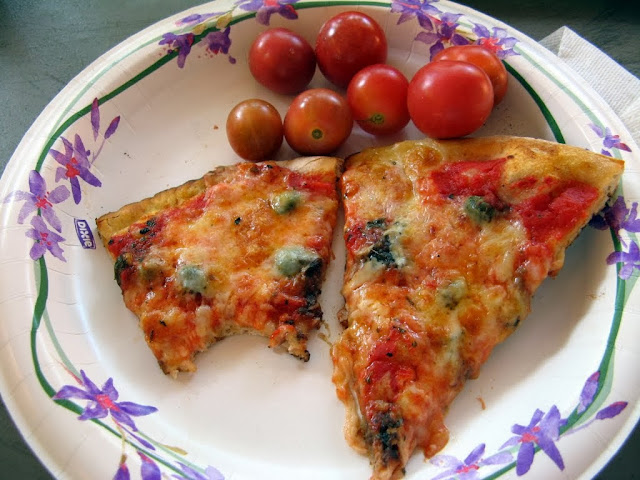 This was close to being the perfect pizza in my memory. Another good clue to the quality and care in the making of this Great Santina Pizza were the crust rims. Look here, at the inside, to see the results of proper fermentation and development of the dough. 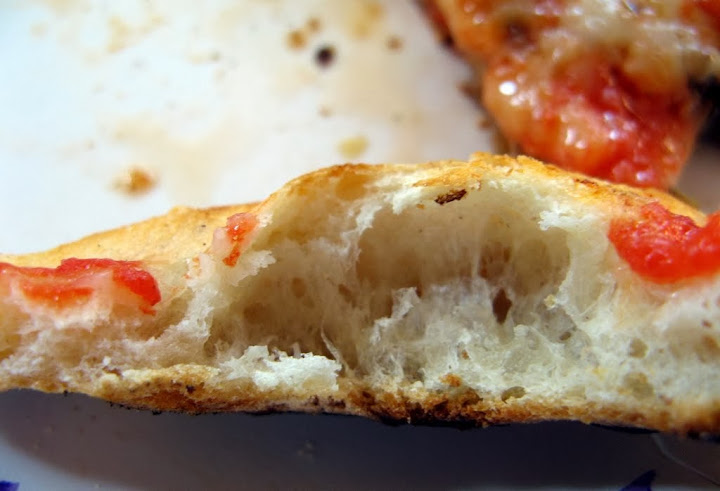 
The rest of our Zihuatanejo stay was good, and we again ate at Fonda Doña Licha as well as Carmelita's Cafe. Our farewell breakfast at Carmelita's was Filete de Sierra (mackerel) a la Veracruzana, very well prepared. But the memorable discovery was the serendipitous Cafe Santina.

Now, that looks like great pizza. It has no rivals here in Melaque.

Steve, I think it may have no rivals in all of Mexico.

Ah, anchovies. So hard to find on a Mexican pizza. As far as I am concerned, a pizza without anchovies simply is not a pizza. It is just bread and cheese and tomatoes. Blah.

A Brooklyn boy? I thought you were an Arkansas boy.

I love anchovies, too, but I also love other kinds of pizza. Usually less is more. A cheese pizza is fine if all the parts are high quality. The next step up is Pizza Margherita, bread, cheese, tomato and fresh basil.

That piizza looks like the best meal you had while you were at the beach. So good, I could ever see taking some home for the freezer.

It was by far the most distinctive meal we had while were were not at the beach, ja ja.

But I think it might lose something if frozen and reheated.

Looks like Brooklyn, NY pizza to me. Yum, Less is more, is right. No fish or meat for me. But I do like mine with lots of sauce.

We were disappointed that we could not find Café Santina.