For this years' customary December visit to Zihuatanejo, we stayed at a hotel on the edge of  Centro, in the mercado district, a 15 minute walk to the beach, to which we didn't go anyway. (With one exceptional moment.)

Through an exhaustive process of in depth research, I chose this particular hotel, the Fiesta Paraiso, on the basis of a 15 minute inspection visit I'd made last year, while on the way out of town. Hotel website here.

It's on Calle Los Mangos #5, a short distance from the Municipal Mercado. That suited me very well, for one of my goals was to more throughly explore the mercados. In fact, the small, Mercado Campesino was almost across the street, where Los Mangos and Los Tamarindos meet. (Sounds like a chutney I made last year.) 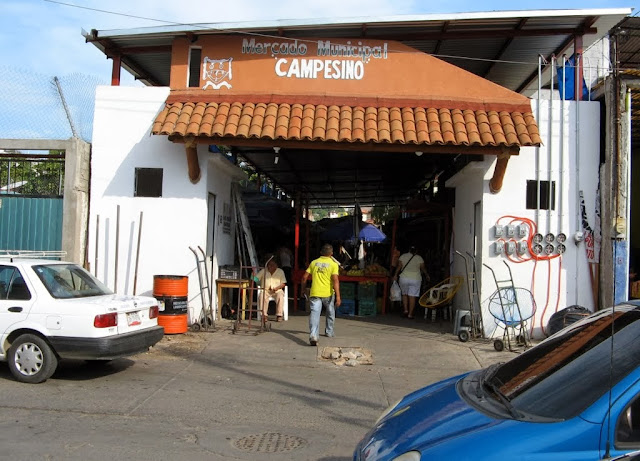 As you can see, the street is "down to earth" and "del pueblo", while the hotel provides simple but comfortable accommodations in a centric location. Best of all, the hotel management is a congenial family with Sra. Paty at the helm, aided by her two sons, Rubén and Omar and some pleasant employees. Later, I may review this hotel separately.

The Fiesta Paraiso was well located for me to explore the Mercado, plus, it is only one street north of the deservedly famous Fonda Doña Licha. We had our first Z-comida of the visit there, Caldo de Pollo for Doña Cuevas and Barbacoa de Res for me. We also had a small pitcher of agua fresca and a mineral water, and left satisfied, after paying a bill of only $105 pesos.

Hardly anything beats serendipitous food finds, and the first came within the Mercado Municipal Campesinos. I went in looking for special tomatoes, and found at least two tamales vendors (on Sunday, at least), and we bought five, $10 pesos, each some of carne and the others of pollo, accompanied by thick hot atole de avenas. (Oatmeal drink. Other flavors were available.)

There were special tomatoes, also.
Our second significant meal was at Carmelita's Cafe (about 5 blocks north of our hotel.) on Sunday afternoon. I had filete de dorado al mojo de ajo and Sra. Cuevas had a plain filete de dorado a la plancha. We both had very nice ensaladas verdes, with greens, avocado slices, sesame seeds and Granny Smith apple slices.

Carmelita's is often erroneously located, as in TripAdvisor reviews, and described as "hidden" and hard to find", which is nonsense. It's here. See below.

During an afternoon stroll into Centro, looking for Café Caracol, we came upon "Zen Wishes", a café offering light fare. Only later we realized the corny pun inherent in its name. We stopped to refresh ourselves from the sultry afternoon heat. I enjoyed a very good brownie, but the coffee was just so-so. The people in charge were very friendly.

Earlier, we'd lunched at Fonda Valencia, on the edge of the Mercado on Calle Los Cocos, near the corner of  Av. Benito Júarez, but the food was mediocre or worse. The service was brisk but rote. My Tiritas de Pescado were o.k., but the Señora's Camarones al Mojo were oily and had more shell debris than shrimp.

This ends Part one. In Part "O", I get some tacos de cabeza and eat an over the top hamburger and more too much more. The greatest serendipitous prizes still lie ahead.

Once again, thank you! Always looking for peso friendly eats in Zihua!

Is Fonda Valencia a satellite location for Zen Wishes?

No, no, there is, as far as I know, no connection between Zen Wishes and Fonda Valencia. Two entirely different types of eating places.

Well, the sisters in law visited here for two weeks in early November, then came R&R, then came Thanksgiving, so we planned our getaway for when we did. It was plenty warm during the mid day. Sra. Cuevas is sensitive to extreme heat and prefers to chill in the pool or an air conditioned room during the hottest time of day.

Our room at the Fiesta Paraiso was $500 pesos a night. A little more dinero would have gotten us a more spacious room, but what we had wasn't bad. Wait for the review of the hotel.

There are many possibly overlooked hotels in that Paseo del Palmar-La Boquita area, less mentioned on travel sites. Most emphasis on the travel sites, such as TripAdvisor seems to be in the La Madera and La Ropa area.

Mary Lou, the next episode will review a very cheap taquería, which also has next door a fonda del mercado, (untried by me), with the menú del día at $40 pesos. The really cheap but good breakfast is the tamales and atole in the Mercado Campesino, but I'm not certain they are available every day.

November was very humid in Zihua. Not a breeze. Luckily I was on the beach and in the ocean. So it was all good... Unfortunately I never made it to Doña Licha's. I did eat my share of fresh fish and shrimp. All Eatery and hotel info on or across the beach is greatly appreciated for this hot location. A great place to explore.

Ah, the visitors. But the first paragraph gives the impression that December is the customary month for your visit.

I have heard people who recommend those downtown hotels, and I've poked my nose into a couple. They are okay. However, for me, due to the heat, the only good reason to visit Zihua, and it's a very good reason indeed, is the ocean, seeing it, hearing it, sticking your toes into it, lounging on it under an umbrella, getting waited on.

Whenever we have stayed in a place that's not directly on the beach, or even is but you cannot see or hear the surf, we have been disappointed. Playa Madera is nice for hotels and walking distance to downtown, not so much for the beach itself. For that, Playa Ropa is superior.

But the hotel? Gotta be on the beach, I think.

I TOLD you about Doña Licha's! No matter, there will be other visits, I assume. It's not going anywhere.

I am just not a son of the beach (I've waited SO long to use that line, thank you!) But I will admit that the susurration of the surf is a soothing, soporific sound.

We did enjoy our habitacíon at Bungalows Madera last year, but this year, I just wanted to experience the belly of Zihuatanejo, just for the hell of it. It was interesting.

The Calle Adelita-Colonia Madera area is mellow, but it's kind of insular, I think. When we ate at (plot spoiler!) Rufo's Grill on Tuesday night, the entire clientele seemed to be güeros. Not that I'm prejudiced, you understand.

There's more story to come. We did go to Playa La Ropa for an hour or two; more on that later.

"...entire clientele seemed to be güeros."

In many respects, Zihua is San Miguel, bare-chested and suntanned.

Yep. Enjoyed the beaches during the day, and spent a lot of time on them. Beautiful.

They were not open after 6...From what I looked up at the time... Dinner hour for me.

O.k. If Zihua is San Miguel, what does that make Troncones? I hear that it has a lot of Canadian property owners as well as Estadounidenses.


Calle Cocos and Mangos seemed very Mexican to me, except that English was spoken by more than a few local citizens. It was fun to chat with the local folks, whether in Spanish, English or Italian.


Note to non-Spanish speakers: Google Chrome has built in translation features. Now, you all have no excuse.

Troncones is a silly little backwater.

A hotel in Zihua on the beach (with a/c, and wifi included), and walkable distance to town so one can explore different restaurants and stores (and buy tamales before they run out) would be the best. I'm sure there are plenty, just need to find a good reviewer of such.

As it is on a hillside, there are many steps.

We liked Mariscos Chendo's, on the western end of Calle Adelita.