I won't discuss the sandwich breakfasts we bought at the TAPO bus station food court in Mexico City, but they sustained us for the 6 1/2 hour bus ride to Oaxaca.

As soon as possible after we checked into the Hotel Posada El Nito, we walked a couple of blocks to the popular seafood restaurant, La Red. I reviewed it last year. It was probably our most visited restaurant in Oaxaca. We like its straight ahead, no nonsense approach to seafood, with good service and fair prices.

This year, it was Saturday afternoon and there was a 15-20 minute wait for a table, but well worth it.

I started with a medium bowl of Caldo de Camarones Pelados, excellent as ever. The broth has just the right amount of spice and is loaded with small shrimp plus one large, unpeeled one. 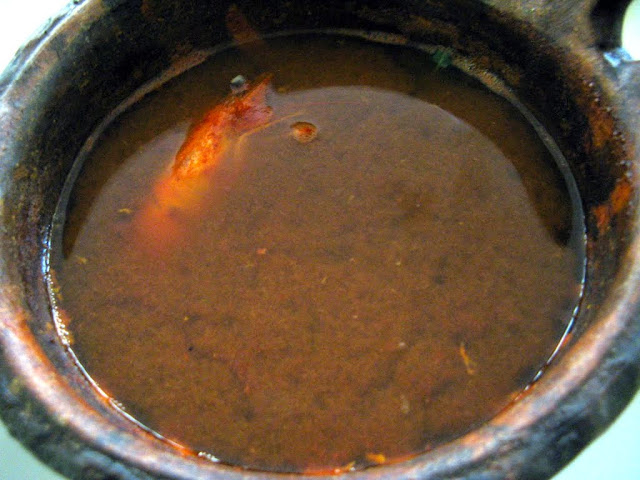 Doña Cuevas had a medium coctel de camarones.  The La Red version consists of a generous portion of just shrimp in a well balanced, not-too-sweet red sauce. She helped herself to some of the garnishes that came with my caldo.

Her plato fuerte was Pulpos al Mojo de Ajo. This was very well prepared. The tender octopus was in generous slices rather than bits and pieces. The ajo was plentiful.

I asked our waiter the difference between Camarones a la Diabla  and  Camarones Adobados. The answer was that the Diabla was "muy picante". So, I ordered the adobados.

They were good. The sauce was almost like a lighter, slightly sweet simplified mole. I had no trouble finishing it.