I am not a cooker of fish. We prefer to eat fish in marisquerías (seafood restaurants) where we can chose from a variety of species, cooked in a variety of ways.

There are occasional exceptions to my no fishing habits. One such was last Wednesday while visiting the home of Ms RedShoes in Morelia.

Taking Leaf of Our Senses
A few days before, while lunching at El Rincón de Las Delicias, I detected hoja santa in my green salad. When I asked Laurencia Tobías, one of the partners in the restaurant, she confirmed it. Hoja santa (Piper Auritum) is one of my favorite Mexican herbs. Laurencia gave me a pair of scissors and invited me to pick some from their organic garden outside. I was delighted and grateful.

On Wednesday, when Jennifer (MS RedShoes) suggested that I cook some tilapia filets for our comida, it was a natural step to use the hoja santa with the fish. Some fast Googling yielded several recipes with a wide spectrum of treatments. I chose one of the simplest, by Ana Saldaña.

A few modifications were deemed desirable.
I used a chile manzano (perón) instead of the chile guajillo, preferring the fruity fresh taste of the manzano to the dry, leathery guajillo.

Yes, we have no banana leaves.
A major modification was that we had no banana leaves for the wrapping. I had asked about them at the corner vegetables and fruit store but they were unavailable. As nearly every restaurant in which I'd had this dish presented it wrapped it in aluminum foil, I wasn't preoccupied with the banana leaves. Besides, they must be cut to size and roasted to make them flexible. More work!  Would Diana Kennedy forgive me if I used foil? Probably not, pero así es. Tough bananas.

The hardest part of the recipe, now that the banana leaves were out of the picture, was the roasting of the onions, tomatoes, garlic and chiles. Not really hard, just taking a little time and patience. At Jennifer's request, I did this in a cast iron skillet.

The next departure from tradicíon was to chunk up—roughly chop, not liquefy— the above ingredients in a blender, not in a molcajete. Oh, the horror! Really, any Mexican housewife who can afford one has a licuadora (blender) in her kitchen. They are a must in the modern Mexican kitchen. The resultant salsa needed a squirt of lime juice to balance out the sweetness of the tomatoes.

The oven was preheating to 190º C (374º F) while I assembled the packets in this manner, a  somewhat daunting process:

• Foil
• Hoja santa
• Salsa roja cocida
• filete de pescado, sprinkled with salt and pepper mixture
• a sprig or two of parsley; no, NOT cilantro, as it would clash with the hoja santa
• olive oil, a few drops, when I remembered it
•salsa
• hoja santa

Close and seal the foil packet well and place on a baking tray with sides.

Bake 15 minutes. Open a packet and see if the fish flakes when probed with a fork. Yes, the leaves are eaten with the fish. Some sources suggest removing the central spine of the hoja santa before further use, but I consider that an unnecessary refinement. 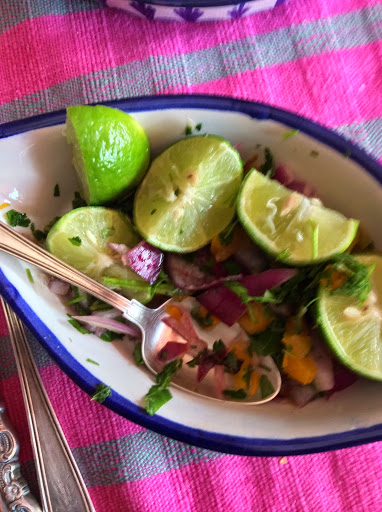 We all approved the results. The fish was juicy, savory and aromatic, with just a slight kick from the chile. 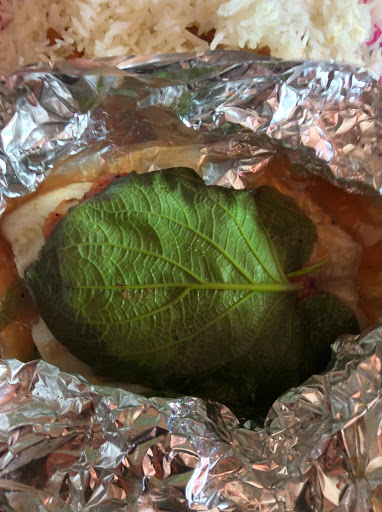 The following Sunday (Easter), I cooked Blackened Salmon Filets with fresh asparagus and creamy mashed potatoes, but that is another posting.
Posted by Don Cuevas at 5:17 AM