It's not often that Pátzcuaro is blessed by an attractive new restaurant, especially one that offers an ample variety of well seasoned dishes. What's more, as a buffet with seconds at no extra cost. All this for a paltry sum of $60 Mexican pesos.

Restaurante El Mandil is located in the venerable Posada Hotel Mesón de San Antonio. (Those of you who have good memories will recall that I once helped organize a cooking class in the very same kitchen and dining room, in partnership with the hotel owners. But I haven't had any business connection with them for many years.)

Restaurante El Mandil turned up on my sights only yesterday, while searching Tripadvisor for new and different Pátzcuaro dining possibilities. The cynics among us, myself included, usually consider this a hopeless effort. But there it was: a solitary review of Restaurante El Mandil, written by an apparent visitor from San Miguel de Allende. Sr. Kamman gave it 5 stars all around. The concept had considerable appeal, as I was tired of the generally touristic menus of Pátzcuaro restaurants, offering Mexican fare diluted for expat tastes; but on the other hand, I was not interested in la comida típica de cocinas económicas. When we were joined by our two friends, and entered the imposing, refectory style dining room, we were pleasantly surprised.

The way it works is that you pay at the cashier desk as you enter, and receive a ticket. You choose a table and put the ticket where a staff member can retrieve it later.

You then walk up to the buffet line, staffed by attentive and helpful employees. My only difficulty was identifying and remembering the various guisados. The servers will help you out, and you can get what you want, and seconds, too. (I was very discreet and restrained and didn't try for thirds.)

Here's a photo sampling of some of the many dishes. (I should also mention that various dishes are refreshed and replaced with new ones in the course of the service.)


Spaghetti? I passed on this one.

The salsas and condiments did not inflame my attention.

Tortillas were made by hand and freshly cooked al comal. There were two baskets, one of crisp and dry tortillas, the other of light colored and pliable ones. 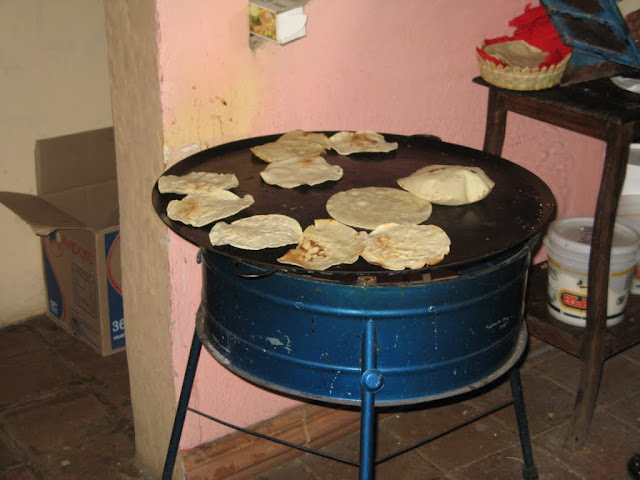 Oddities would appear on the line from time to time. I enjoyed a very tasty bean burrito, and later in the meal, these nifty hamburgers showed up. (I skipped trying them, you'll be pleased to know.)

I enjoyed the rice with fresh vegetables. It was light and neither oily or soggy, as is too often the case elsewhere.

The simple desserts were a little unusual:
These alitas a la Diabla showed up later in the service. I passed on these, having been told that they were muy picante.

See all the photos here.

Now for some ratings.

Food: *** 1/2 The food is best described as comida casera, or home style cooking. It is fresh and abundant, and a big step up from the usual comida económica fare.

Ambience: **** Note that some tables have benches and not chairs. There are tablecloths!

Price: At $60 pesos per person for all you want to eat, a tremendous bargain. Drinks and a small dessert included.

We would definitely return.

Location: Calle Benigno Serrato 33, near the corner of Asencíon, across from the eastern end of the Basilica.