Yesterday, three of us had lunch at Fisher's Morelia branch at Paseo Altozano. Fisher's is one of a chain of high flying seafood restaurants, which I believe originated in the D.F. in 1989. 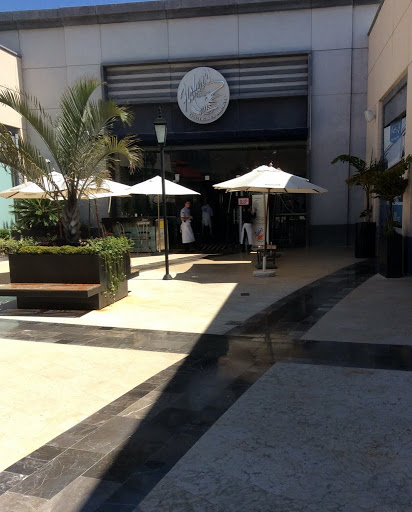 The Fisher's at Altozano is hidden in a somewhat obscure nook at the back of beyond but is worth seeking out. From the entrance inward, the total experience is one of a high energy vibe. That vibe permeates everything at Fisher's: the very, very attentive service, the delicious but often intensely seasoned food, and the room itself. It is not a place for a quiet, intimate meal for two.

The tiled dining room is large, and there is a smoker's section with an impressive view of the valley. One side houses a large section denominated "Oyster's Bar". 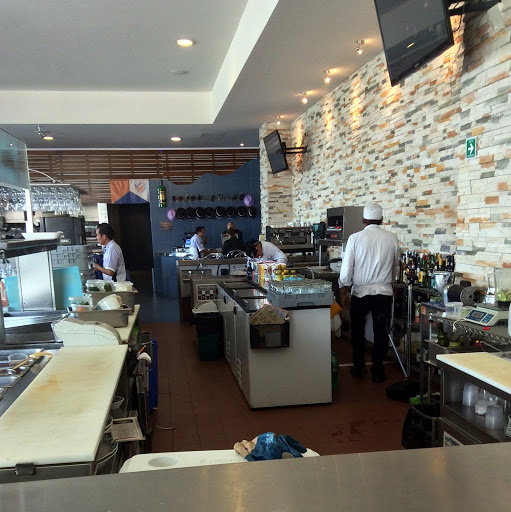 Fisher's is well equipped and ready to take care of your thirst, with beverage stations at strategic points of the room. 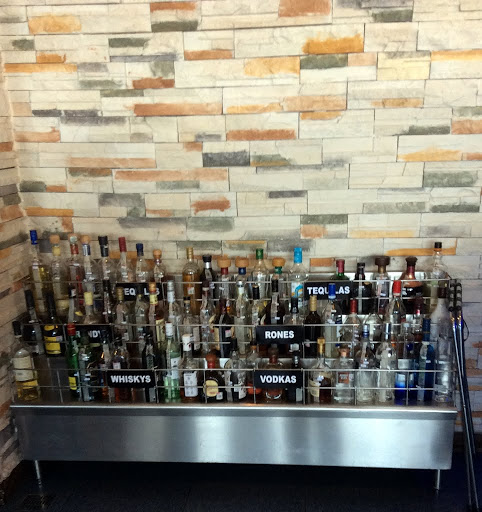 As new customers, we were given an especially warm and attentive welcome. We had free seafood tostadas, free sparkling white wine, and later, with an order of coffee, even a free dessert. All that in addition to the bracingly salty and intensely flavored opener Consomé de Camarones, served hot to all guests. 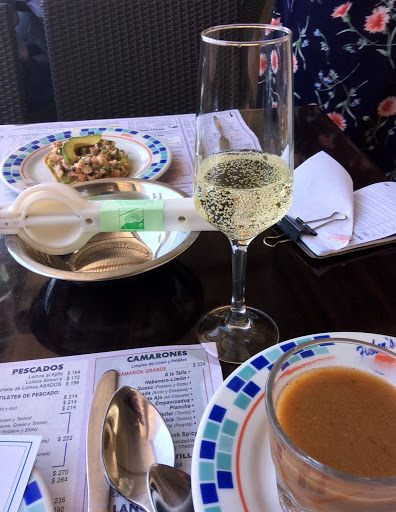 We were also brought bread and totopos. The bread was passable although not distinguished.

I'd studied the online menu, and I pretty much knew ahead what i would order.

For a starter, Trebiche, an elaborate construction of white fleshed fish, salmon and shrimp, cooked in lime juice and dressed with a delicious sauce. But wait! That's not all: I was brought a small glass bottle with milky leche de tigre which the friendly manager punched up with a healthy slug of vodka. It was intended to be poured over the Trebiche. In retrospect, I now think I would have been better to have drunk it, straight from the glass. The dish was good, but there were too many flavors duking it out in the dish. A more significant flaw were the mushy shrimp, left too long in the lime juice. But that did not spoil it for me. 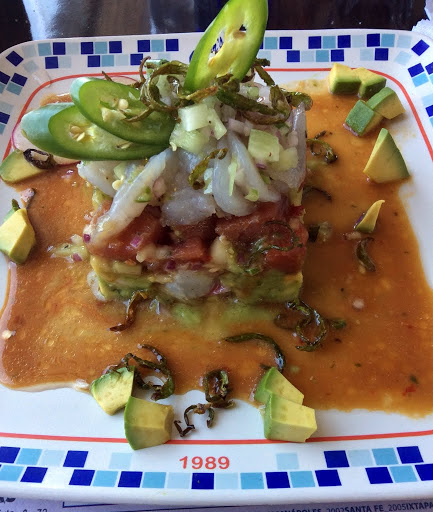 Jennifer ordered Cebiche Peruano, but due to some confusion, I ended up with her dish and got a few bites of it before we realized what had happened. It was simple and refreshing, although one bite of a slice of raw chile Jalapeño convinced me to push the rest to the side. 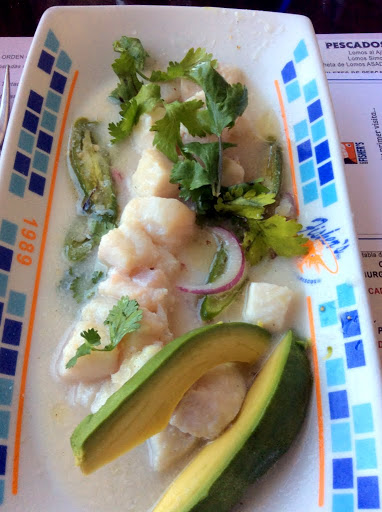 Sra. Cuevas wisely ordered her standard, a Coctel de Camarones y Pulpos, in the smaller version, served in a beer mug. The larger comes in a chabela or balloon glass.
I had a bite and liked that it was distinctively dressed, free of the typical cloying sweetness of cocteles at other restaurants. (I read on the menu that the ketchup is made in house.)

My entrada, at least, was so large as well as elaborate that I feared I would not have room for a second course. But I managed. I ordered Ostiones en su Jugo al Chipotle. It was served in a modest but attractive clay pottery bowl, and had all the essence which characterized our meal at Fisher's: hot, spicy, smoky and salty. It was compelling and irresistible, but the highly seasoned soup left me gasping at times and reaching for the relief of some agua mineral. 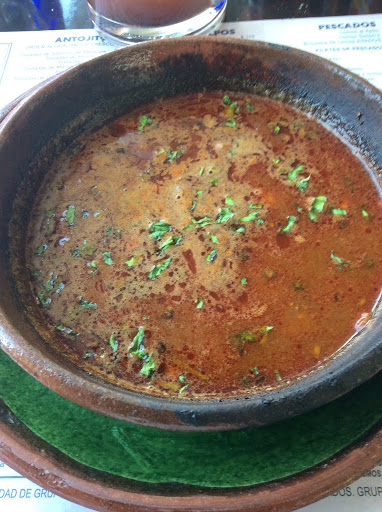 Jennifer ordered a Taco de Pescado, served in a flour tortilla, accompanied by frijoles negros y arroz gualdo. This was probably more interesting in the eating than in the viewing. 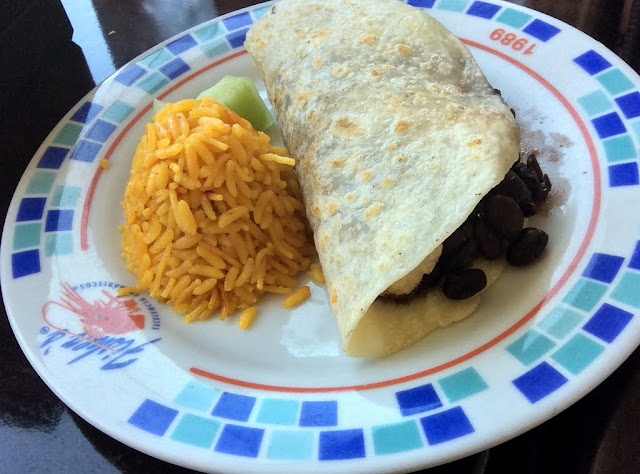 Sra. Cuevas has three attractive Tacos de "Cochinita" de Marlin, which were very good, although extreme caution is advised in regard to the wickedly potent Salsa Picante de Chile Habanero Quemado", in the portion cup. 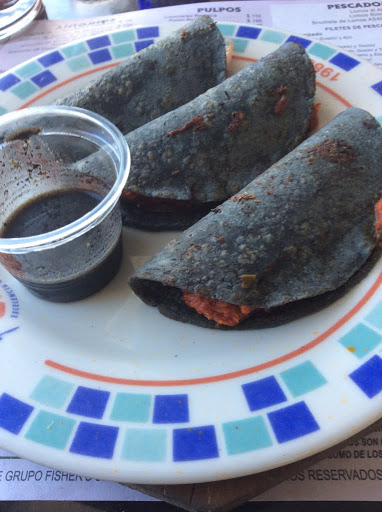 The affable manager offered us free dessert (as if we needed it!), with the purchase of coffee, but I was the only taker. From the dessert menu's often rococo offerings, I chose a fairly simple Natillas. This was reminiscent of Vanilla Cup o' Pudding, not bad, but I've had (and made) much better. The coffee, called a Lecherito and described as a sort of caffe macchiato was innocuous. 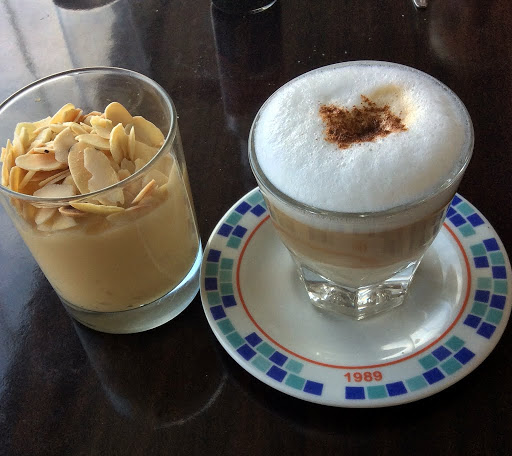 The free dessert arrived, a multilayered wedge of puff pastry alternating with some sort of cream. The toasted almonds on top were eagerly nibbled by my companions, but the cake itself languished after a sample bite. 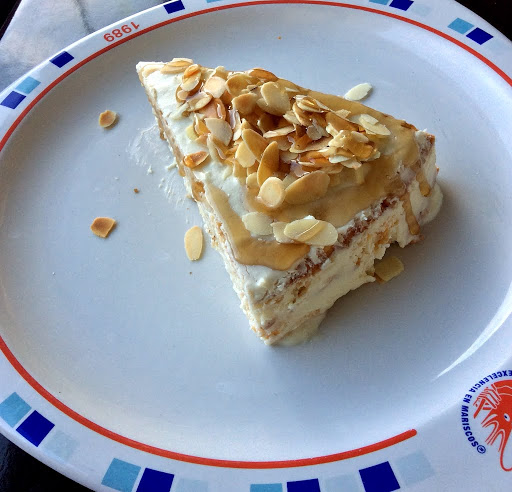 In all, a good experience and I look forward to returning.  Here are the RATINGS

Service: 7  Very attentive, even overly so. But they went all out to welcome us on our first visit.

Cost: Our bill totaled $1039 pesos, before tip. That includes various beverages.
You can see the cost per item in the photo below.

Location: Paseo Altozano shopping center, at the end, beyond Sears, and to the right.