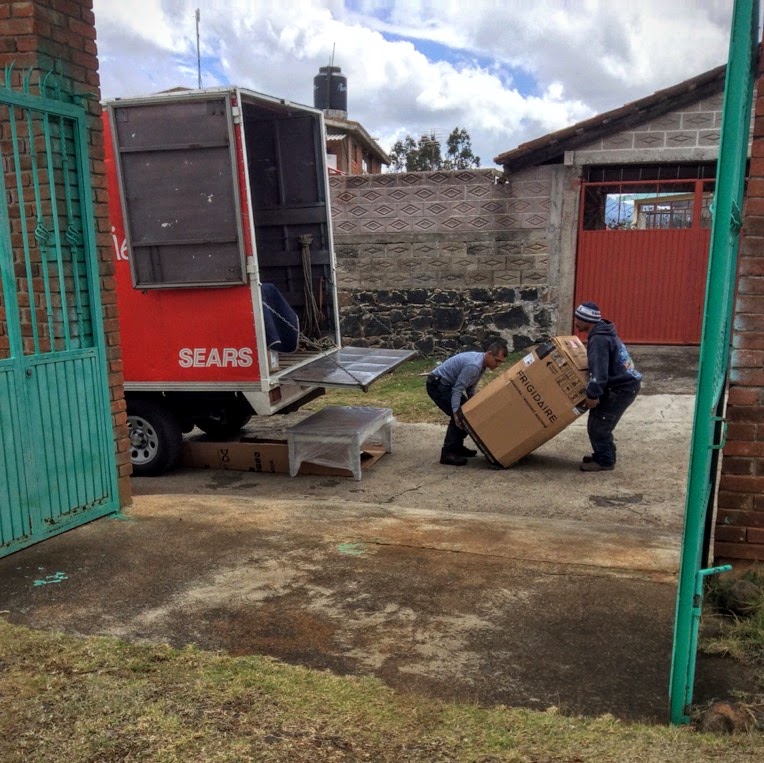 Many of my faithful readers have undoubtedly been wondering,"What of the stove, more specifically, the oven, with the broken glass door?"

If you want the background, the original story of the horror and emotional trauma is found here: The Inevitable Entropy of the Kitchen

I took immediate action to file a claim with Sears México, who, although taking nearly two months to fulfill the warranty, (the delay is not entirely their fault) did the right thing for me. When it transpired that the model in question was no longer available in order to replace the door, Sears at Paseo Altozano Morelia offered me a complete new range of my choice. I agreed that if the cost of the new range exceeded what I'd paid for the original, I would pay the difference.

About two weeks later, we went back to Sears Paseo Altozano Morelia, where I was cheerfully and courteously greeted. I had with me two printouts from the Sears.mx web site, showing my two top choices. Both were io Mabes*, the crema de la crema  of Mexican manufactured stoves. But I perhaps made a poor decision in choosing a range with extra "advanced" features, as you will see farther along. My excuse is that I didn't see a model on the showroom floor, only on line on the Sears.mx web site. But it was shiny and it was slick. It only cost me $439 pesos over the old, GE (made in Mexico by Mabe) stove.

In Mexican ranges, there are Mabes, your daily hang-out-the wash-while-the caldo de pollo simmers stoves, and then there's io Mabe, stainless steel clad, top of the line machines, which would bring prestige and glamor to your kitchen, when your amigas fresas come over for tea sandwiches and little pastries while pasar el tiempo con chismes.

Some of these io Mabe ranges are so elegant and advanced that you won't ever want to cook on them. In fact, baking in its highly advanced oven may be so challenging or discouraging to you that you'll give up in frustration unless you persist.

I have had my new stove for three weeks now as of last Wednesday. I began the next day to test its functions. I will say that the range top works very well. Speaking in the kindest way, mind you, the oven rack system seems designed by a team of clueless appliance engineers, with an eye to nifty cool, but useless, and even obstructionist features.


I went ahead and fired it up, without a pre-flight checklist  or tuneup by an authorized Sears Técnico. Also, I failed to "RTFM" in its quasi–detailed, but basically lame entirety. So for what ensued during the first night's bake-a-thon, the blame is partially mine. Still there are a few features that can make your baking session a hell.

The oven proper functions functions quite well, if a bit hot and tending to burn bottoms while baking on the lower shelf. No complaints from me regarding "HEAT". I can even do a pretty good pizza in the oven.

The problem arises with the over engineered oven racks, which depend on the use of two side rods to permit "auto slide". The lower rack cannot function independently from the upper. Both must come in and out together. This is a design flaw that makes access to items baking on the lower self not only difficult, but hazardous. Imagine something that needs basting, or rotation, or has a baño María below that must be refilled or maneuvered in and out without spilling. Or liquid custard pumpkin pies.

Further compounding the irritation factor are the stops,  por el amor de Dios, front and back on each rack, to prevent objects from shooting out into the kitchen, or worse, hitting the glass in the door. See above image. Even maneuvering things into and out of the oven is a trick, unless it is something like a thin cookie sheet, as every item must pass over the low but hindering stops. Grasping baking pans on the lower shelf often requires metal tongs to grab hold and semi rotate the item to pass over the stops.

Finally, a small yet irritating feature that exists mostly to save electricity and to prolong the life of the oven light bulb, but mostly to piss me off. The oven light is turned on by a small chiclet of a switch on the confusing control panel. You do learn quickly where that switch is, because the oven light is self extinguishing. (I refer you to the reflexive verb, "apagarse")

So, you are frequently turning the light back on.  Do not confuse the light switch with the identical appearing chiclets that operate the programable oven ( I would never use such a feature, not even in my worst nightmares.)

I called out for help, and our friend, Mark came to the house, and was able to detach the rods that move the racks. But it appears that the auto slide is perhaps a good feature. It's the inflexible, Siamese rack system which remains, sneering, the dominant misbegotten feature.

Mark observed that the interior walls of the oven are horizontally grooved to accept normal oven racks. Mark's keen analytical mind digested this for a brief moment, and then he hypothesized that this range was retrofitted from an earlier, more sensible model, but now replaced with the pinche sistema de parrillas fijas actual.

Yesterday, I finally gave in and replaced the auto slide draw rods. I figured that if I had to put up with the fixed, inflexible shelves, they might as well be auto emerging and receding. Accomplishing this task required a series of topological mental contortions to relocate the correct positions for both the draw rods and the racks themselves. This is not a user friendly system, to say the least. But I completed it and savored the sweet although brief triumph. In the end, the io Mabe oven wins.

Meanwhile, while on a recent shopping excursion to Morelia, Mark discovered a store selling various hardware and stove parts. It's called Refaccionaria San Martin. He found an oven rack that might be adapted to serve faithfully in his wife Nancy's presently one-shelf oven. That discovery gives me hope that I can find two racks that function well and simply, for my io Mabe oven. Then the old system can be put to more useful tasks, like drying underwear indoors, and I will be content.

Wait! That's not quite truthful. I won't be satisfied until I have a solid, workman like, yet compact commercial stove, one without bling or frills, but that just works. See an example, below.

Abundant thanks, to my informal proofreaders, Hank and Felipe, who offer me corrections of typos and better ways to express myself in Spanish.
Posted by Don Cuevas at 4:57 AM