This Little Piggy is Rosso 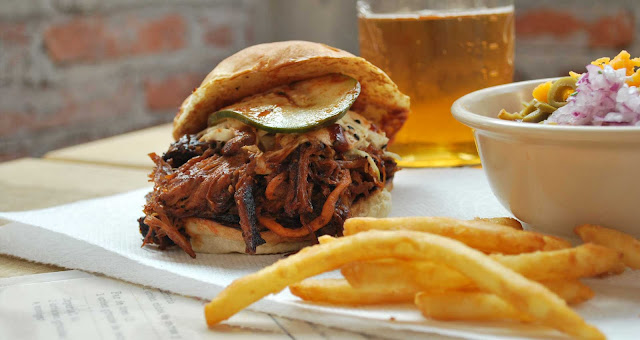 Our friend and former neighbor, Larry, the retired Texas High School Band Director, had been enthusiastically telling us about Porco Rosso BBQ in Colonia Roma. He enjoyed it so much that in one extended weekend, he'd eaten there three times.

Why would anyone want to eat American style barbecue while in Mexico City? There's such a wealth of other interesting cuisines from which to choose, both Mexican and International. (To the best of my knowledge, the first American BBQ restaurant in Mexico City is the somewhat rudely named Pinche Gringo BBQ in Colonia Navarte.

Here's why:
Because it's fun, and above all, delicious!

We finally decided to overcome our own resistance and go there. "We" consisted of our traveling friend Shirley, Sra. Cuevas and me.

Porco Rosso defines informal dining in Colonia Roma. The dining room is like something out of a Texas ranch, with wooden picnic tables and benches on a gravelled floor. The inner buildings are used freight cargo containers. Tables are shared with fellow diners. There will probably be a wait for a table. Our wait was about 35 minutes, but it was a pleasant one, chatting with fellow waitees. 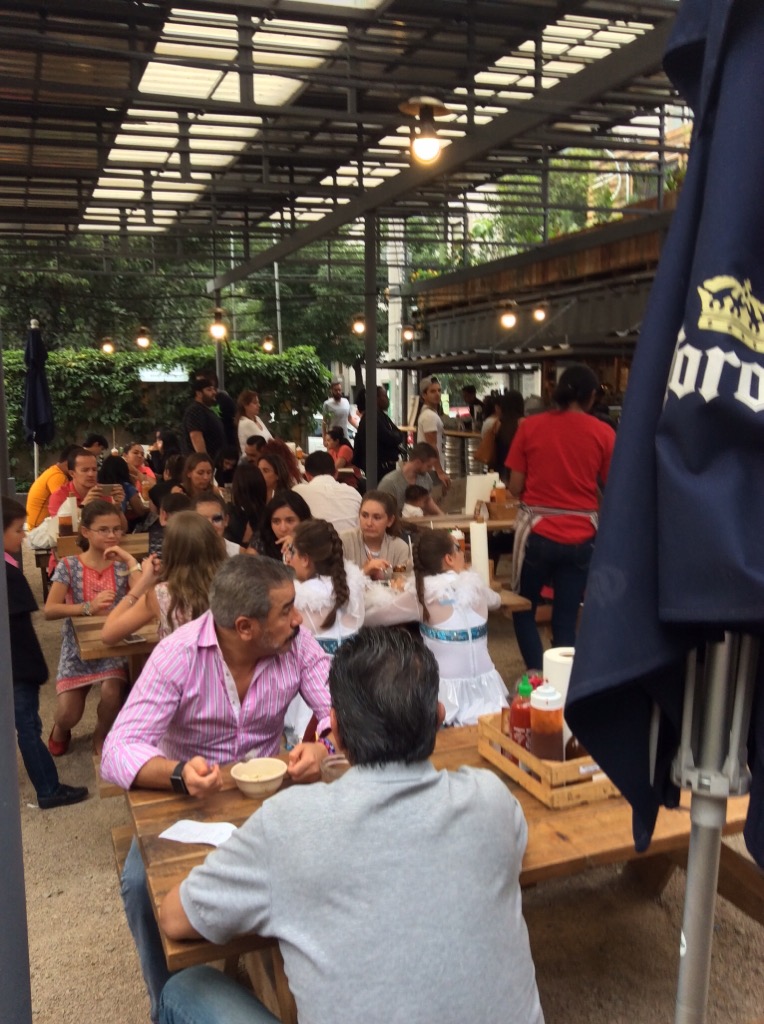 I see by its web site that Porco Rosso calls its food "K.C. BBQ" The kitchen has a massive smoker oven. 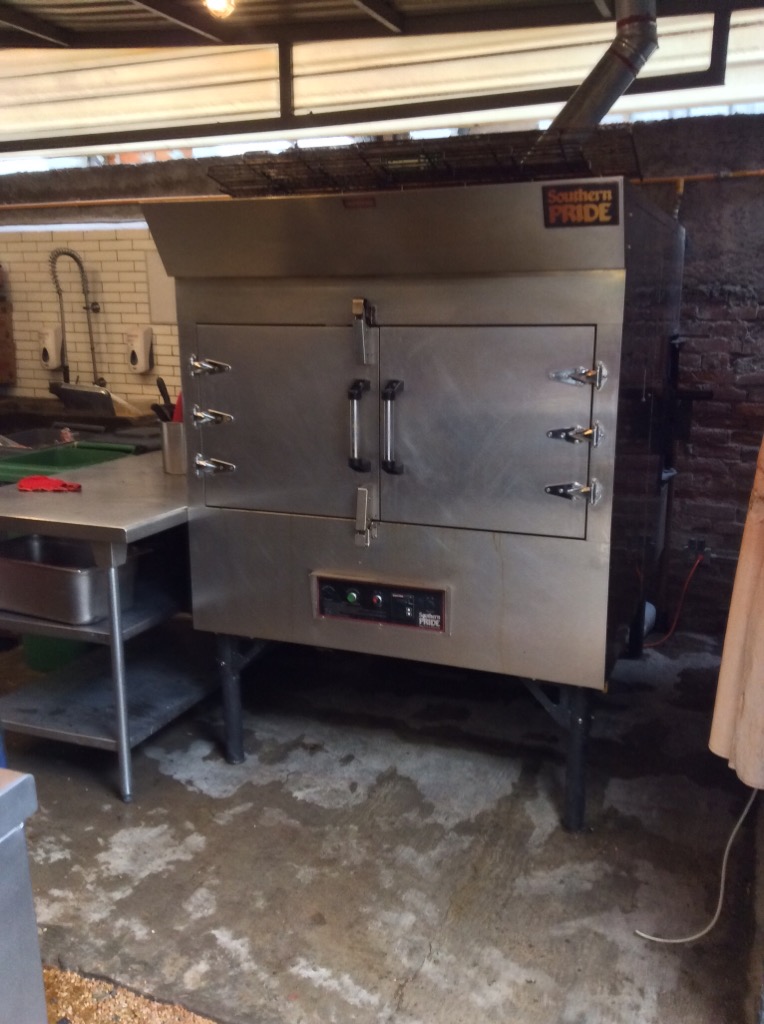 Once inside, you place your order and pay at the order "desk" then pick up your drinks at the adjacent bar.
The rest rooms are inside massive steel cargo containers. The hand washing sinks are like horse troughs. 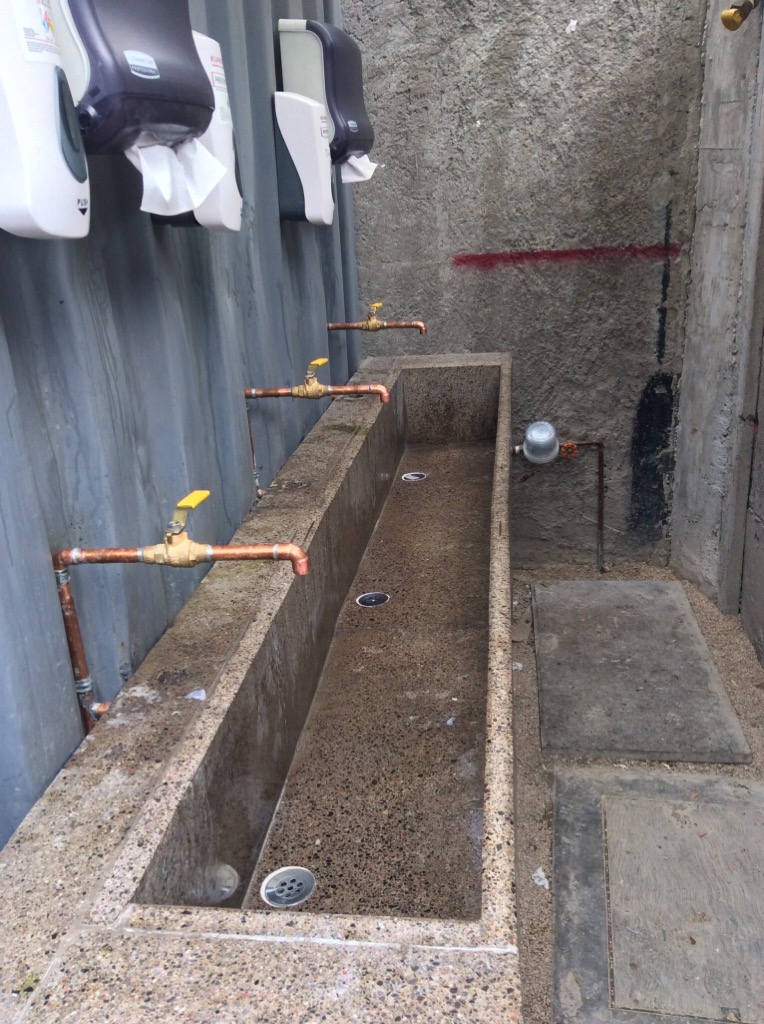 Your order is delivered to your table by a waitress, but not without some glitches. We had at least three incorrect orders brought to our table before the correct orders arrived, incrementally and at different times. But being in a good mood and recognizing the informality of Porco Rosso, we shrugged off the service quirks.

The food is almost a "Giant" version of Texas bbq; everything is over the top and bigger than life.

Take the bbq beans, for example. Isn't it enough to cook up tasty beans in bbq sauce? But at Porco Rosso, the beans are topped with sliced green olives, jalapeños, chopped onion, sour cream and shredded yellow cheese. 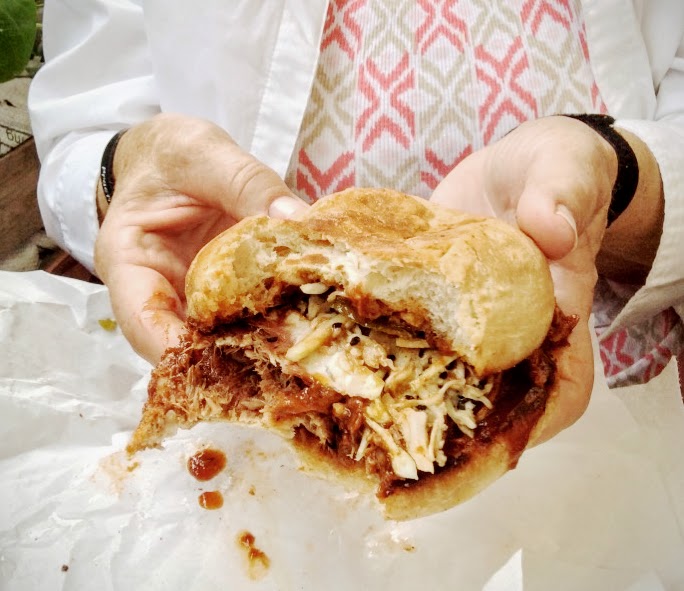 I ordered the "Par de Ases" combo, which gave us a choice of two meats; I chose bacon and brisket, and two sides for $410 pesos, plus a small order of Baby Back Ribs at $135. Our sides were the aforementioned K.C. BBQ Beans and slaw.

The brisket was the best of the meats, although not in the same class as Rudy's BBQ brisket at their Laredo, TX store. The bacon was salty, thick cut but limp. It might have achieved greatness had it been broiled or grilled to some golden crispness. The Baby Back Ribs were o.k. 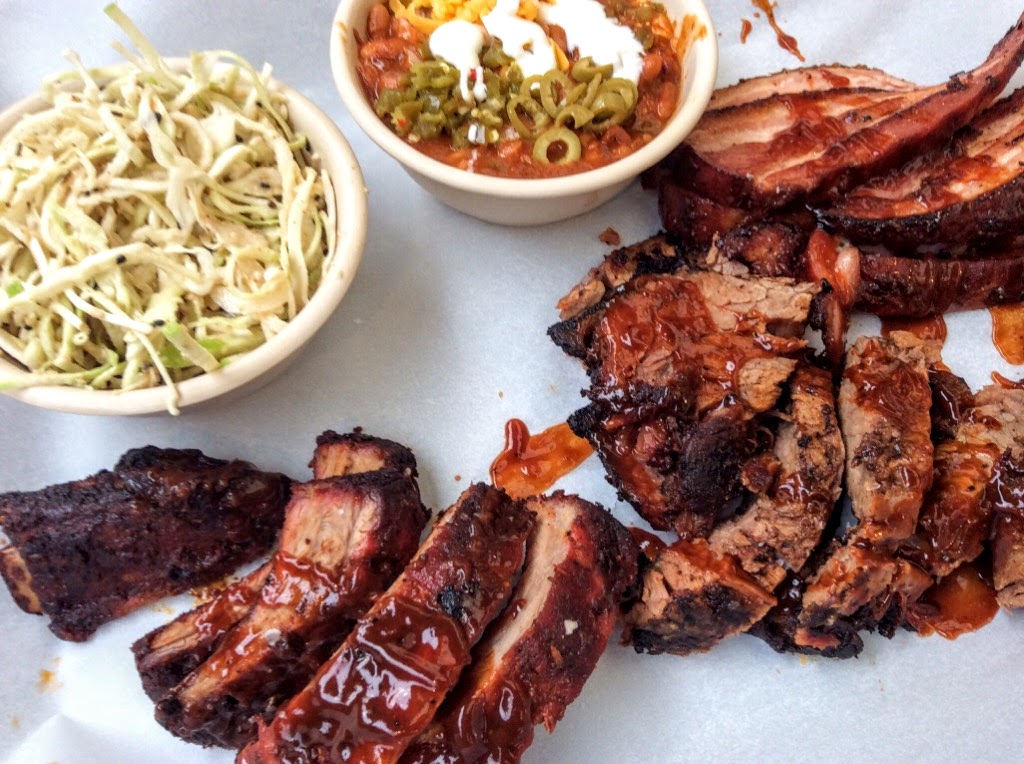 The slaw, oddly enough, was kind of lean, but that was welcomed as a foil to all the rich, smoky, spicy and fatty fare facing us.

What we were missing was some plain, sliced white bread and some chiles jalapeños. I hailed a passing waitress and ordered pickles (it's an extra) and some bread. The latter was slow in arriving, and when it did finally, it was a miserable, low quality hamburger bun that had been toasted (once again!) and thoroughly dried to inedibility.

On the other hand, the pickles were a Platonic dish. They were home cured, with great, fresh crisp textures and appropriate spicing. In my opinion, it was the best dish that we'd had.

Porco Rosso excels in the beverage department. The iced tea is exemplary. There are at times unique aguas frescas. The cerveza selection is pretty good, too. I had a Cervecería Colima, Cerveza "Páramo", which I enjoyed. It reminded me of Sierra Nevada Pale Ale.

Service: 5 The problem lies not with the servers but with the awkward and poorly designed service system.

Ambiance: informal and relaxed. Seating is not very comfortable. Tables are shared.

Our friend Larry advises arriving before 2:00 pm. for the least waiting time and the best service. Seems like good advice.

Summary: I enjoyed the experience although it was somewhat flawed. I might return only occasionally, but at an earlier hour.

Also branches in Condesa and in Coyoacán.
web site: http://www.porcorossobbq.com/