Up Ramp in Uruapan at the Restaurante Las Camelinas

We’d long had glowing, enthusiastic reports from friends about the Restaurante Las Camelinas, in Uruapan’s Hotel Plaza. Last Saturday, we went in a group, headed up by Georgia, plus Mark and Nancy and Shirley.

Now, normally I would not be drawn to restaurants of this style and class. But I put my peculiar preferences aside and determined to enjoy it.

I rode with Mark and Nancy and our conversation was enjoyable and interesting. Among various topics, we discussed the road navigation app, “WAZE”, which was running on Mark’s phone. I turned mine on and we had some laughs at the two, overlapping  female Spanish WAZE voices.

We arrived at the hotel parking lot entrance after a Waze-guided tour of some of Uruapan’s older, quainter neighborhoods. The dominant feature of the internal parking  at the hotel is the imposing entrance ramp, which ascends maybe 2 stories into the interior.

Elevators or stairs descend  from the parking floor to the restaurant level. The ample foyer is enhanced by very nicely displayed Michoacán artesanías.

The dining room lies at right angles to the foyer, with large windows overlooking some picturesque buildings.

We had a large, round table in a corner. The seats were comfortable, but conversation was somewhat difficult over the expanse of the table.

Service was very attentive and professional but not intrusive. In fact, the service ranks among the best I’ve had in Mexico. Some specialties are enhanced with tableside preparation. Caesar Salad, for example. It looked good, if somewhat heavy on the oil, and Georgia made sure that they wouldn’t use any yellow “ballpark” mustard in its preparation. Also Plátanos Flambé, which may not actually be on the menu, but we saw it prepared twice while we were there. The service staff and kitchen seem very open to special and off menu requests.

There were two table salsas, a green and a red, apparently made in a licuadora, O.k. but nothing special. There was also a small bowl of what looked like 1000 Islands Dressing, but I didn’t try it. We were also given a dish of Ensaladilla Rusa Cooked: cubed potatoes and carrots in mayonnaise, which was better than I expected but will never become a favorite of mine.

Sra. Cuevas and I both had a mezcal de Etúcaro for openers. Then we both ordered a warm salad of calabacitas plus a little nopal. This was a nice, subtly dressed dish and the pyramid of calabacitas slices were cooked al dente. I had chosen it in anticipation of richly sauced main dishes to follow.

It was challenging to select from the extensive menu, but both Sra. Cuevas and I decided on fish. She had a simple fillet of salmon with an attractive side of ratatouille; I chose the new-to-me “Posta de Robalo de las Hierbas Antiguas.” That was accompanied by a pair of tasty breaded fried “sandwiches” of tomato and cheese. My fish seemed odd to me. Not spoiled, but somewhat odd in taste, and parts had a cartilaginous texture. I didn't finish it. As it turned out, neither had rich sauces.


Shirley and Georgia both enjoyed a chicken fillet dish in a rich mushroom gravy. 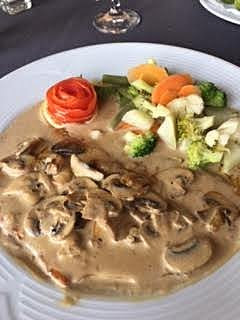 Others had dishes I couldn’t identify, due to the difficulty of talking across the table.

But I did get pictures. For example, Mark’s Atún en Salsa de Mango, with its frilly expanded cellophane noodle headpiece. 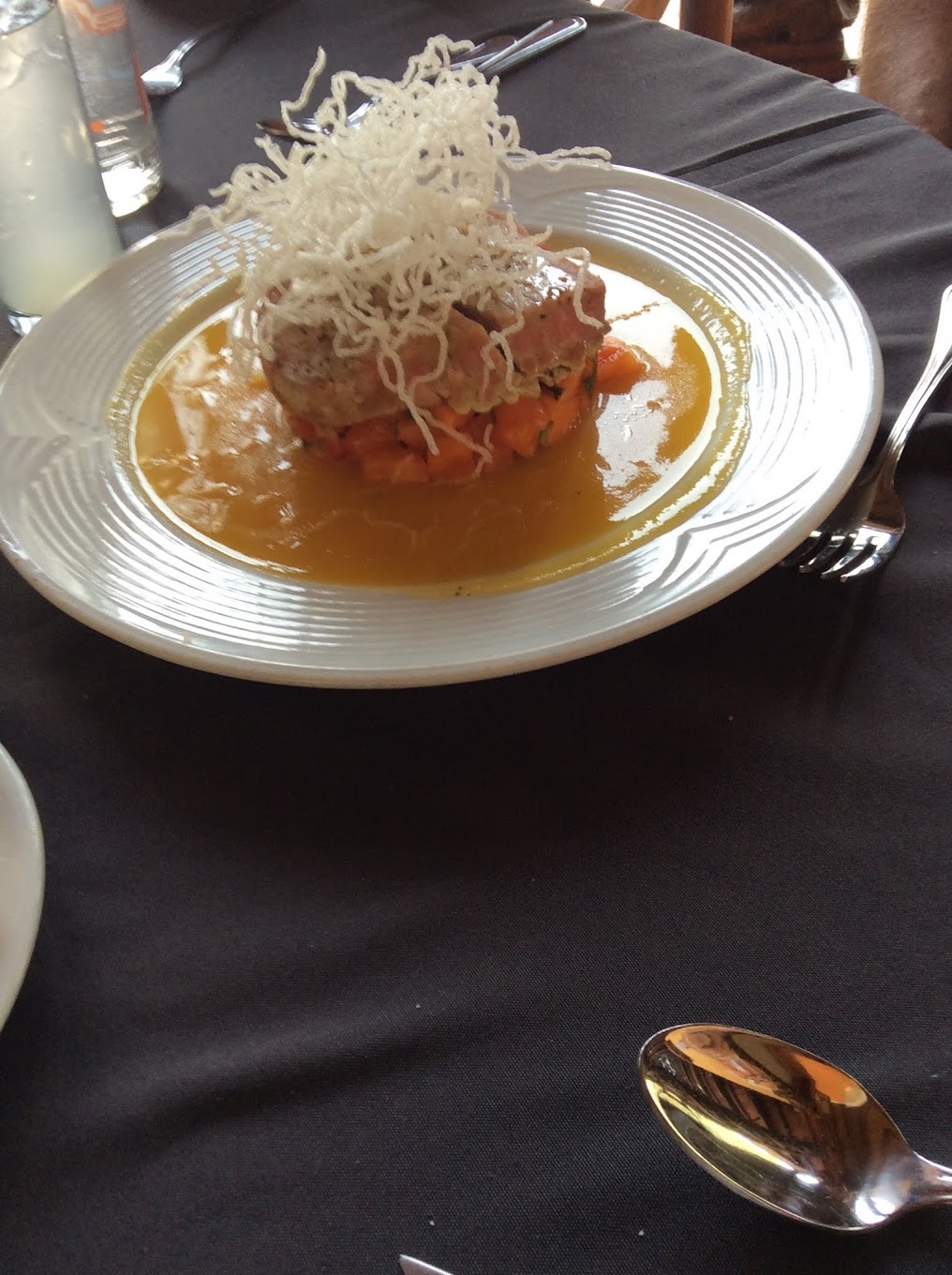 I had tiramisú for dessert, which was o.k. and small enough not to be excessive. The café Americano was average.

Here are a couple of desserts.

In conclusion, I would go there again, and probably would have a beef dish. But I’m in no hurry. It’s kind of far to go for a meal, no matter how good.

La cuenta for just the two of us was $980 pesos, which I thought reasonable. We had two mezcals and a glass of white wine to enhance our meal.