A Brunch for a Saturday in Summer

To celebrate the return to the Rancho of our Alabaman neighbors; as well as to take advantage of the excellent produce and seafood now available, Doña Cuevas and I hosted a brunch last Saturday. There were seven of us in all.

The developing menu went through several stages of creative imaginings, but in the end, this is what we had. 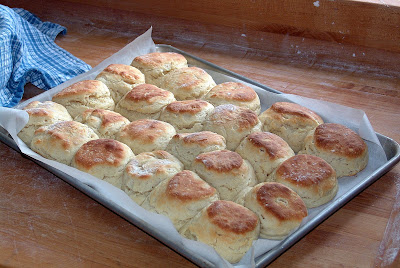 I know a nice little place in town with a great view, that would make a great business for an expat like yourself. Just imagine Mexican Fusion cuisine, with Chef Don Cuevas in charge....
Nice thought, bad business decision thought....
Gambas,eh must be from your Spanish influence.

I'm going to invite myself to brunch!

I love the brunch menu and those angel biscuits look heavenly! If you decide to take Constantino's advice, please let us know...the family and I need a good excuse to travel!

Constantino,
Thanks, but just forget it. I'm retired, of irregular disposition, and I don't wish to be working in the food biz again.


Rachel;
I'm sure we'll do it again sometime. (Although not exactly the same menu.)
You and your husband are invited!

Constantino lives closer. He has an open invitation, especially if he wants to help us grill some artistic pizzas.

I'd invite Felipe Zapata and his Guapa Señora, but he's non-socially oriented.

Don Cuevas,
Let me do your menus for you. Gambas are prawns. Chives are "cebollinos" Ajetes are green garlic shoots. Instead of "Revuelto de gambas y ajetes" I would have put "Huevos revueltos con camarones y tallos de ajo". Don't mind me. I'm just a compulsive nutcase when it comes to wording :)

Bob, I appreciate your preciseness. And, you're quite correct, they weren't actually "ajetes" but tallos de ajo or garlic chives. But I was trying to recreate a memory of a dish we'd had in Spain, along the Costa Mediterranea, precisamente. El Mar Menor, where as a starter, we were served "Revuelto de gambas y ajetes."

I thought I had a picture on the Web of that dish, but the best and closest I can find is here http://tinyurl.com/maflve
as served at "La Casa Del Reloj". I do know that we had the Revuelto de gambas y ajetes, but even I don't remember exactly where.

It was Spain, it's true, not México. Sometimes creative license and nostalgia takes precedence over linguistic precision, at least for me.

But it's good to know the correct terms, for such a time as they may become useful to me. Gracias.