"How could I have missed this place all along?" I exclaimed when our friend Rose led us to the Mercado Niño Santo (officially, the Mercado Nicolás Bravo), on the western side of Morelia's Centro. The popular name derives from la Iglesia del Niño Santo, up at the corner.

I had often walked nearby, south of Avenida Madero and west of Calle Galeana. I'd been close, but not quite close enough.
The Mercado is just south of Calle Corregidora, on Calle Nicolás Bravo. 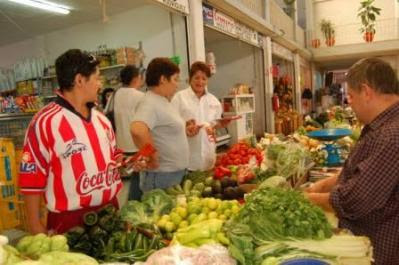 Photo: Cambio de Michoacán
It's a small, traditional mercado, one of the most pristine in México. I Googled it and found out that it was the first mercado in Morelia to be certified under the government's "Mercados Saludables" program. News article, Spanish. It's celebrating its 34th birthday this year.

Across Calle Nicolás Bravo from the mercado entrance is a small shop where a busy family makes corundas. Customers line up to have these small, simple corundas, 4 pesos apiece.

Back on the steps at the portals of the mercado were bread and pan dulces sellers. Rose bought us a few hearth baked bolillos. We ate them later that day at home. They were hand made, and had the characteristic and desirable scorch marks where la masa had hit la piedra. They were tangy with sourdough, equal and perhaps superior to those of La Espiga in Pátzcuaro.

Inside the main floor of the mercado was a world of blue and white walls showcasing the dried chiles, vegetables, fresh fish and meats.

An older woman was selling tall bottles of golden liquid. I asked her what it was."Vinaigre de piña" was the reply. I wondered if there were any smaller size bottles available. She sad the big one was only 10 pesos. She unscrewed the cap to allow my to sniff the mildly pungent vinegar. She said, "Look, there is la madrita on top."
It's a fuzzy little fermentation film that I remember from my Mom's pickling and canning days, back in the 50's.

I decided that for the price, I couldn't go wrong. I gave her the 10 peso coin and she crossed herself and blessed it. It may have been her first sale of the day.

Beyond were beautiful, rosy huachinangos being unloaded from an icy crate onto a sales table. I knew I'd have to come back another day. For one, I hadn't brought a camera.
Various meaty joints and piggy parts were set up on a table across from the fish.

The mezzanine level beckoned, with its comedores ringing the mercado, promising a savory breakfast in the true Mexican mercado tradition.
Although not al the comedores were open that early, it was still a difficult choice.

One of the nice things in a mercado comedor is that the proprietors are happy to lift the tops of the cazuelas and explain the contents to you. Local # 127 had birria, bistec de res en salsa negra; albóndigas. I imagine that they could prepare huevos al gusto.

On the opposite side, another local had barbacoa, which in that instance looked a lot like the birria across the way. The were also serving menudo. The man lifted the pot lid to show me the caldillo and to one side, a separate pot full of very fresh cooked and varied viscera.

Over in a corner local, a strumming guitar player sang scratchily. Although I can appreciate the cultural aspects, I prefer not to listen to these performances while I'm eating.
I found my wife and Rose and we sat down at Local #127, Comedor Doña Feli."Felicitas" is her true name, and it's felicitous to eat there.

My choice was easy: birria. I'd had a bowl of barbacoa de borrego the day before at Barbacoa José Luis, on the Periférico near ISSTE, west of Costco. But it wasn't up to its usual standard. There were too many small bony fragments which detracted from an otherwise pleasant meal.

At Doña Feli's, the birria was bone free, rich and meaty, red with chile and tomato and very satisfactory.

Doña Cuevas had a plate of Bisteces en Salsa Negra, with some good beans and a small mound of rice. We both drank jugos de naranja brought up from the juice stand downstairs. Rose recommends this juice stand for its special combination jugos.

When we finished, Rose ordered some rice and beans to go.

We asked for la cuenta. $115 pesos Mexicanos. About $8.44 USD
This demonstrates again that in México, the best food bargains, and delicious ones, are in mercado comedores.
Contrast that cuenta with what we paid the evening before at Cafe Catedral, under the portales, looking at the Plaza de Armas. Two limonadas, a cafe con leche, a portion of carrot cake and some pastel de elote: about $160 pesos.

The sótano or lower level of the mercado seemed more typical of mercados elsewhwere: dark, relatively low ceilinged (compared to the main floor) and jammed with merchandse and more chiles and vegetables.

Upstairs, on the mezzanine level, you can get a dental or medical checkup or, as I've read, even a chest x-ray . It's open to the locatorios or stall holders and the general public.

I am glad you are gumptious in your prowlings around. I need to keep a log of places you have encountered. I for one appreciate your reports!

Constantino,
Thank you for the gumptious reply. :-)

I hope to be going back by next week, to take some photos and also trying the Caldo de Gallina that Comedor Doña Feli makes available from 6:00 p.m. on, until it runs out.

I'm glad that you like Mercado Santo Niño. In the years that I lived on Aldama I never got used to that mercado. There was always something depressing to me. I think it's because the mercado lets in more natural light than most, and is almost never busy and thus lots of room in the aisles, and lots of empty puestos - that you can see "too much". I once saw lots of cucarachas running around un puesto de frutas. Ick!