We're big fans of pollos asados al carbón. It used to be that we didn't distinguish between the al carbón pollos and the pollos rostizados. I now make the distinction that the former are cooked on a grill over charcoal and the latter, more common and usually cheaper, cooked by gas or perhaps la luz on a rotating spit.

So, over time, we've made a small list of favorites. Many made our list due to their convenience as well as their savory qualities. Price is a lesser consideration, but still of some importance.

Here's our personal favorites; what are yours?

1. Pollos Asados al carbón "El Tejaban". It's north of the railroad tracks on the right side of the highway on the edge of Tzurumútaro, heading towards Tzintzuntzan. It's ably run by Abel, but is consistently open only on weekends. Sometimes you can get lucky and find it open other days. 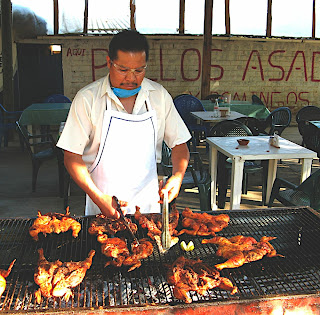 The pollos Tejaban are coated with adobo marinade before cooking, then fresh orange is squeezed on at the finish, and a sometimes too generous shake of salt and black pepper. They come with a thin, piquant salsa roja; a fresh, crisp and barely dressed cabbage slaw, accented with strips of chile Jalapeño, and crunchy carrot rounds; rice (we skip the rice as it's extremely dull, oily and stodgy); tortillas hechas a mano are extra. Sometimes, but not often, Abel will grill chiles güeros to toss in. Prices have varied from $50 to $60 pesos recently.

There is outdoor seating, and drinks (including barrel Tequila in the nearby tienda de abarrotes "Los Fresnos".) We usually get it to go, but it's even better eaten on the spot, even with some flies about. 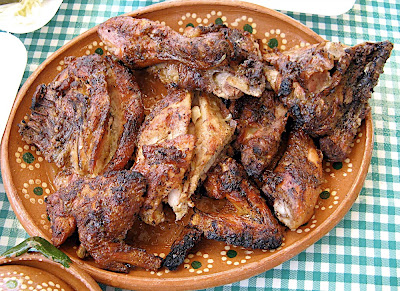 2. We have heard good things about Pollos "El Rey" from a blogger named Felipe Zapata. He likes El Tejaban but says El Rey is even better. It's on Libramiento kind of near the bus station, below Mercado Tariacuri but above Ibarra. We haven't tried any yet, but intend to.

3. Just stopped yesterday at "Pollos Asados "La Vías", which kind of translates to "Chicken Tracks", indicating it's closer to and just south of the RR tracks at Tzuru crossing, on the other side of the highway than El Tejaban, but close to Barbacoa a la penca "Javier y Lety".
(Got all that?) It's the one with the pineapple upright on the grill. It seemed a bit more primitive and less professionally run than Abel's El Tejaban, but the chicken we had today (and it was a slow day for pollos) was very tasty. It came with grilled onion, nopales and a couple of tasty slices of grilled pineapple. It was supposed to have salsa and rice, but the very young assistant left them out of our purchase, even though he told his Mamá he'd put them into the bag.
No importa; we had both rice and salsa at home.

A whole pollo to go at Pollos Las Vías was $65 MXP. A good deal, even with the mixup and a general air of dishevelment. I didn't note any seating.

4. Pollos Al Pastor "Don Alfredo" This place attained a moment of fame from an appearance in a Lonely Planet Guide to Mexico. We once got one of these rustically prepared chickens, speared on a tilted stake over smoldering charcoal and were quite unimpressed, It was one of the blandest pollos we've had. The price a few years ago was $70 MXP, and not worth that much. Today, I was quoted $80 MXP. We passed on that. The chickens did not look very attractive, especially at the price. I think they may come with frijoles de olla. Maybe it's the Lonely Planet listing and maybe it's the superb location, on the lower end of Libramiento, just before it enters the Glorieta, opposite the new Bodega Aurrerá, but they are just not worh that much to me. (Speaking of which, I'm surprised that Bodega hasn't put in a rotisserie for chicken.)

5. 'Way up on the Carretera a Santa Clara is a pollos al carbón grill run by women. It's sort of across from and between Super Codallos and Automotriz Gárvez. These chickens have a heavier coating of adobo. If you get there early, say, 1:00 p.m. they are quite good. But if you arrive after 3:30 or so, the pollos tend to be dry. Back when we used to stop there, 3 years ago, the chickens came with frijoles de la olla, tortillas and salsa. I have no idea of current prices. 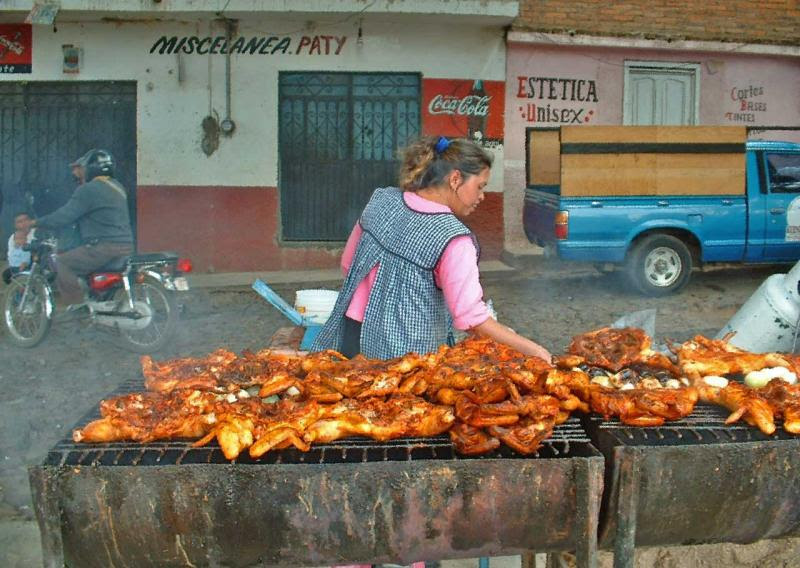 6. Unnamed pollos asados al carbón, Calle Padre Lloreda, east of Siete Esquinas, more or less below el Hospital Civil. Nicely adobado, about $60, but doesn't come with much. One disadvantage is that they are cooked ahead and kept warm in an ice chest. I don't care for that method, but prefer them fresh off the grill. However, they are no bad and will do in a pinch.
Posted by Don Cuevas at 7:30 AM

I have my favorite in Melaque. The chicken is more expensive than roast chicken at the grocery in Salem, but the meat tastes a lot better here. A regular meal for me -- and the left over chicken is a boon for other recipes.

Steve, maybe the Salem ones were loss leaders. Plus, did they come with slaw or grilled onions, salsa and (ugh) rice?

We could get rotisserie chickens here (not al carbón) for $55 pesitos, but they are small and not as tasty as the pollos Al Carbones.

Plus, I assume you are comparing prices in dollars with costs in pesos accurately?

Our Train Tracks Pollo Plus yesterday cost us less then $5 US Bucks at current rate of exchage.

Don Cuevas, when I opined that El Rey was the best, I was not even taking Tejaban into consideration because we simply never see it open except on weekends, and we dine there virtually every Saturday.

So for me, it is not a major player. But since you have brought the issue up, I have to say I like them both equally. They are quite different but equally high on the tasty scale.

Felipe, the deal with El Tejaban is that during the week, Abel, (the chief cook and owner) works in Morelia. When he is on vacation, he opens the grill during the week. He has smaller parillas for the slower weekdays.

Last week, his car was in the taller, and he couldn't go to work. So he opened the Pollos Asados to try to ganar unos pocos más pesitos.

We must follow up your recommendation of Pollos El Rey and give it a try.

I prefer pollo al carbon to pollo rostizado! The chickens here come with the barely edible rice, tostaditas and a macaroni salad with ham, carrots and chopped jalapeño. On rare occasions, we get some delicious papas adobadas with our chicken. The prices range from 70 to 80 pesos.

I wonder if all of the chicken establishments in Mexico serve terrible rice!

Leslie, Macaroni Salad?
Do you live in Hawaii?

I never take the rice that comes with the pollos. I do like the refreshing, no-mayo light slaw (cabbage-carrot-jalapeño salad) at El Tejaban.

By the way, the most expensive pollo rostizado we ever bought was in Colonia Roma Sur, México, D.F., at a place on Av. Bajío that roasted them a la leña. $90 pesitos.