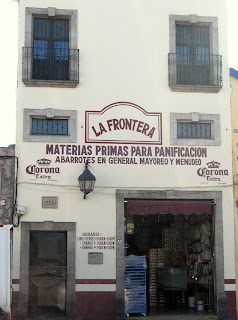 Baker's Joy. It's not just a pan release spray.

It's La Frontera, in Morelia. As a retired, professional baker and ex-bakery owner, I love this place.

It's the place panaderos go when needing some special ingredient, such as rye or gluten flour; caraway seeds or flavoring extracts; pectin to set jellies and jams; a special pan for that poodle shaped cake, or perhaps a powerful floor mixer, or a 36-part dough divider.

It was Jennifer Rose, an American attorney living in Morelia, who first tipped me off to La Frontera. A question had arisen on the MoreliaConnect Yahoo Group in regard to "Saldo", said to be Costco's closeout store where goods are sold at half price. La Frontera is located just a few doors down, toward the southern end of Calle Abasolo where it meets Plaza Carillo at Calle Benedicto López, on the edge of Morelia's Centro.

Sr. Ufemio López, the store manager, told me in an interview that Plaza Carillo used to be the southern edge or "frontera" of the city. When it was founded by a Sr. Huerta in the 1930's, the original store was on the corner. It served in part as a feed store to supply rancheros who'd come into the city to resupply with nutritious alimentos. It carried everything from barbed wire rolls to wedding dresses.

The horses and burros were tied up outside while the farmers and rancheros would shop.

Ufemio's father later bought the business and moved it to its present location at Calle Mariano Abasolo 727. He gave  young 'Femio the task of watering and feeding the horses and burros of the customers. He would earn propinas for this service.

The store was moved a few doors up the street, and about 15 years ago, Ufemio assumed ownership of the business. Flour was one of the items sold in the original store, but Ufemio developed that specialty line by adding more baker's supplies, decorators' colors, baking trays, storage baskets and much more. In addition, it still sells general grocery merchandise, from Fruit Loops to spirituous liquors. Below, decorators' supplies. 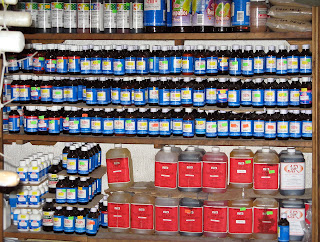 The store gradually prospered despite various economic crises, and now sells and delivers merchandise and ingredients to Morelia's better panaderías. Among the customers are the reknowned Horno de Los Ortiz, and La Jarochita.

In the last year or so, La Frontera was improved with the addition of new lighting and efforts were made to organize the shelving so that customers could walk back and get a better look at the merchandise. It's still a somewhat flour-dusted place that holds fascination for both amateur and professional bakers alike. The aisles are piled high with flour sacks.


Today, it's worth braving the swirling, circulating traffic and scarce parking around Plaza Carillo for a visit to La Frontera. Sr. Ufemio and his staff are friendly and cordial, and he speaks English quite well. He told me that he likes to keep in practice speaking English, which I believe is better than my Spanish.

Nearby are some small, neighborhood bakeries. Just up Abasolo a few doors is Pan de Zinapécuaro. It's an "expendio" or sales point. The distinctly local bread is brought in from Zinapécuaro, about 35 miles northeast. The moist, dark heavy pan de piloncillo (which is not precisely its name) is reminiscient of unspiced gingerbread and worth a try. The shop replaced another baker's store that used to sell the crustiest bolillos in Morelia. I wish I knew where it has gone.

A block to the west, on Calle Galeana, just down fron the narrow cross street Calle Guerrero and across from the Hotel Casa Galeana at #507, is the expanded Panadería Los Ángeles. It's run by the charming Angelina. She specializes in pan integral. Try the galletas integrales, flat, crisp, multi-grain cookies. The Chiles Relleno de Queso en Hojaldre are good, too, when soon out of the oven.

A few blocks northwest, where E-W Calle Aldama ends at a "T" at N-S Calle Quintana Roo is the old fashioned Panadería La Jarochita. Get there after 4 p.m and before 8:30 to have best choice of the hand made (literally) breads.

View Pátzcuaro's Best Eats in a larger map
Posted by Don Cuevas at 5:12 AM

What a surprise! I gave a friend The Tour of this place only last Sunday.

It's also *the* place to buy tomato paste.

Jennnifer;
I'm not surprised that they have tomato paste, but if you don't mind getting a carton of 12, 170 gram (6 oz.) cans of S&W tomato paste, it's available at Costco.

And thanks for telling me about this place.

How funny that I used to walk past this place on my way to the corner store at Abasolo and Lazaro Cardenas to buy churros salados when we had people coming over on the weekend. I always thought those containers were paints!! lol

That part of Lazaro has all kinds of specialty stores because it's on the routes of many buses that come into the city from pueblos around Morelia.

Always learn something new about Morelia.

Thanks, Emily.
We miss you.