Betabeles: The Beet Goes On 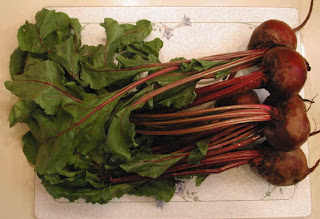 Betabeles. It's a lovely word for an unlovely root. They look like ruddy cannon shot piled in the market stalls or on the ground cloths of the vendedoras. We've been eating them a lot lately, so I thought I'd post some ideas. From deep within the BlogSoil, I dug up this never-before published  item.
(I've edited it to conform with my present, heightened blogging standards.)

Now, for a reprise, a return to our roots.
In a recent discussion on Michoacan_Net, Jack McGarvey asked me, "Which prompts me to ask you if beets are popular in Michoacan, whose climate and soil seems almost ideal for beets to flourish. If beets are popular there, how do the "natives" prepare them? Me? Well, there's hardly any vegetable more satisfying than cooked, sliced beets slathered in butter and seasoned with salt and freshly ground pepper. Works for carrots, broccoli, and asparagus, too. Simple is better?"

My reply was "Beets me, Jack." (I couldn't resist.)
Fresh beets are easily available in the Pátzcuaro mercado. They often run to a huge size that should be classified as ordnance. But, with careful looking and knowledge, one can locate the señoras, seated on the ground with their choice home grown produce spread out. One day, I spotted a fine bunch of 8 smaller beets—not "baby" size, but smaller than cannonballs— and when I asked "¿cuanto?", I was told,
"Diez pesos." It's a deal.

Back at the house, we trimmed off the unfortunately ugly greens, scrubbed the beets, and set them to simmer an hour or so. When cool enough to handle, Doña Cuevas removed the skins. She likes beet greens, but only if they are young, tender and in good condition. I don't eat them, as they have an exceedingly laxative effect on me.

Our usual manner of preparing beets is to eat them with salt and pepper. Those beetlets were amazingly sweet. They could have served as dessert.

I used to make Havahd Beets, but why mess up such a deliciously natural vegetable? Harvard Beets should be made from canned beets.

Occasionally I'll sprinkle on some balsamic vinegar. Once in a while, I'll make a vegetarian borscht, topped with crema.

We will sometimes roast beets. They are excellent with other roasted root vegs, such as turnips, if you can find them. 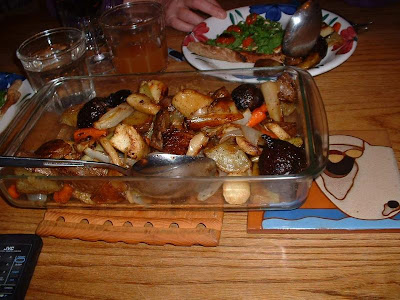 I haven't seen much in the way of beets in local restaurant meals. They are sometimes used in fresh jugos combinados, often called "Vampiros". I've also seen them served in shreds on salads. I must confess, I’ve never drunk such juice combinations in Pátzcuaro.

Shredded beets are found on certain fruit or vegetable cocteles, in the Pátzcuaro mercado. Here’s a photo. Beet shreds in bolsitas in center row. 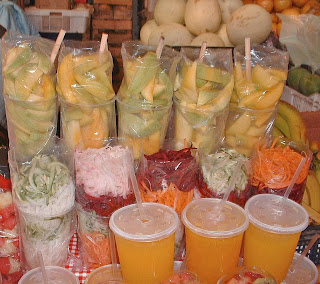 Long ago, in San Cristóbal de Las Casas, we once ate some tostadas de verduras. Cooked potato, carrots, beets, and some mashed  frijoles negros as a base, plus some cubes or a smear of aguacate. They were delightful.

Here are some yuppie beets, back in the Little Rock, Arkansas Farmer's Market. That was back when they were $1 USD a precious bunch. Some ended up in the roasted vegs pictured above.
UPDATE: pressure cooking beets is the way to go. After scrubbing the beets, removing the feeler root and the greens*, we put them in the base of our Fagor Duo pressure cooker, pour in about 3 cups of water, perhaps a little salt; lock on the lid, set the pressure to "2", and fire the range. When the little indicator pops up, we turn the gas flame down to low. Let the beets cook under pressure for 35 minutes.
(This time is longer here at 7000 feet above sea level.)
At the end of 35 minutes, we turn off the flame and let the cooker cool naturally. If we want to release the steam rapidly, we'll put the cooker in the sink and run cold water over until the indicator drops down.
We wait a bit until the beets cool, then easily peel off the skin. *The pressure cooker manual says to peel the beets before cooking, but we think that's messy and unnecesary.
The remaining liquid is richly satisfying, and can be used in other dishes** or simply savored as a hot or cold drink.
We do love pickled beets, when made at home. Here's a recipe, gleaned from the pages of James Beard's American Cookery for Polish Style Pickled Beets.
10 to 12 medium-sized beets
1 TBSP grated horseradish or bottled horseradish. I boosted the kick factor by adding some wasabi powder.
1/2 tsp caraway seed
1 TBSP salt
1 TBSP sugar
2 cups vinegar (I used apple cider vinegar. White vinegar is fine.)
** Beet cooking liquid, as desired.
Cook the beets, then skin in the usual fashion. Slice across thinly and place in a large bowl.
Heat the vinegar and seasonings to dissolve. Pour over the sliced beets, taste and adust seasonings, cover with plastic film, refrigerate overnight. Serve, or store in jars under refrigeration.
Optional additions
One or more thinly sliced white onions. Or, a dozen small, cebollita type onions.
Peeled, hardcooked eggs.
Fresh dill weed, snipped.
Here're a couple of tips: if you do add the cebollitas and/or hardcooked eggs, you should increase the pickling liquid to half again, so that it covers all the stuff.
Another thing to be aware of is to either cut the beets into slices small enough to pass the mouth of the jars, or use wide mouth jars.
I suggest consuming these pickled beets within a week or two. That shouldn't be difficult.
Posted by Don Cuevas at 7:02 AM

Beets are abysmal. I´ve never tasted a tasty one.

Felipe, maybe it's a genetic thing, like a love or hate for cilantro.

I'll wager that Tancho and Mexico Bob love beets as I do.

I love beets! Always have and always will! I grew up eating the canned variety. It wasn't until our move to Mexico that I began cooking my own. And I learned that most Mexicans don't cook them. They shred them raw and eat them with "Limon y sal".

I too love beets, always have. Currently in my fridge; bag of shredded raw for who knows what, one whole uncooked, and a bowl of pickled. I'm with the doña C on the greens; fresh, young, and tender....
Debi

"Vampiros" are okay except that they taste a lot like drinking old buffalo blood. Kind of reminds me of Love Potion #9..."It smelled like turpentine, it looked like India Ink"...but if you are a little bit "estreñido" (constipated) they work very well. Pure fresh "jugo de betabel" works pretty much the same way but it more or less reminds me of eating dirt. Nevertheless, it is "natural" and good for you :)

Ahh вкусные свеклы , or delicious beets in English. I love them, Grow them, Cook them , Pickle them, Roast them, and best Eat them!
They do have an earth taste when they become too mature like the cantalope size you do see at the mercado all the time, but new beets and smaller mature ones are great and good for you. We have a Acme Juicer that we make beet juice and often mix it with carrot juice also. I won't even go into the great Borsch dishes. You picked on of my favorites. Sad that Filepe doesn't enjoy them, his loss, our gain!

When I went into Amazon.com to look at an Acme, it also listed "Champion Screw Machine".

Maybe juicing IS really good for your health!

PS: Dear Readers, how do you feel about sauerkraut and sauerkraut juice?

Don Cuevas,
I LOVE sauerkraut and sauerkraut juice. I used to buy Frank's Sauerkraut Juice in little green cans in the U.S. but I never found it here. I toyed around with the idea of making some sauerkraut but is is a bit complicated to do it right. I seldom see sauerkraut in the market. I only found it once or twice in León and I ate it with gusto. If you are making sauerkraut I am thinking about beating a path to your door and begging :)

Bob, that Frank's Sodium Juice in a can couldn't be good for you!

Re: fresh sauerkraut. I want to make it but now the weather is too hot. I would have to ferment it in the cochera or under the porch, because of the smell.

The other thing is that I prefer not to can the kraut but to eat it fresh. That takes up a lot of room in the fridge.

Maybe right around Day of the Dead is a good time. The weather should be cooling off by then.

Do you get cabbages like this one?
http://tinyurl.com/yah7nm7
One should be sufficient for a winter's supply of kraut.

Acme was the original company it has since been taken over by Waring I believe. It is a Extractor and not a screw machine like the champion. You can find them in the US used for 50 to 75 bucks usually. Or buy them new.
check out: http://www.amazon.com/Acme-6001-Juicer-Juicerator-Centrifugal/dp/B000E4AO6M

Tancho, I was trying to make a joke. It's like the old newpaper headline:

If you make the kraut I'll supply the cabbages. There is NOTHING like good sauerkraut and fresh Polish sausage. We will have to twist Tancho's arm to make the "Kielbasa" (Киэлбаза in Russian).

By the way, I was going to make beets today but I think the weather is already too warm. The only beets at the market looked like giant horse turds. You know, the ones that smell and taste like Mother Earth. If you want good beets I think you have to grow them yourself.

Bob, you need to try our Mountain Grown Pátzcuaro betabeles.

I'd love to make garlic pork sausage. BUT, it's got a lot of garlic! When I was a kid and after our Easter dinners, and week following my schoolmates would shun me because of the garlic permiating from my skin...
But it tastes great!

Tancho, I think I have the recipe, if you have the guts to stuff them with. :-)

In the photo above you show the vegetable cocteles and am wondering what people do with them. Do they eat them raw or are they just something to tKe home and cook with? I wanted to try one but wasn't sure what they were for. I love beets!

This was the only photo I could find of them. Thank you for posting.

Vanessa, I guess they just buy them and eat them as they go, or take home and eat as a snack.

Update: We recently purchased a Turmix Extractor de Jugos "Platinum" Automático, from Costco On line. I had some difficulties at first, particularly in assembling it correctly. But I got the hang of it before long. Now I am juicing stuff almost every day. It's mostly carrots, but beets play a part. I love that purple-red inky look. Straight, beet juice can be overwhelmingly mineral tasting, so it's best to mix small amounts with other juices.