The Milanesa is a popular dish in Mexico. It's simply a cutlet of meat or chicken, pounded thin, lightly breaded and fried. It's often used to fill a torta or its variant, cemita. (Bread roll sandwich) It bears some relationship to the Austrian Schnitzel, but even more so to the coteletta alla Milanaise. I wrote about this a year ago in regard to the Holsteiner Schnitzel I enjoyed at Sanborn's in Morelia. That post attempted to describe some of the background and history of the Milanesa. Today, I'll describe how to cook them.

Not long ago, Costco had a special on sliced, boneless pork loins. I bought a package of about 8, but should have bought two packages. But, there's almost always a shortage of space in our refrigerator's freezer.
I cooked the first lot simply as lightly breaded pork chops. They were good, but a bit dry to my taste and not as tender as hoped for. Two days ago, I decided to cook the remaining three, but this time as Milanesas de Cerdo (pork). At first I was going to do them something like Chicken Fried Steak, with a cream gravy, but with warm weather here, it seemed too heavy. There are differences between a Chicken Fried Steak and a Milanesa. Read this Dallas Observer article.

I have some sweet red, orange and yellow peppers in the fridge, so I decided to make a mild pico de gallo, adding half of an English cucumber, onion, minced fresh ginger; some pineapple vinegar, lime juice, salt and a couple of chopped jalapeños. All the vegs except for the jalapeños and the ginger were diced medium and combined in a stainless steel bowl. There was a splash of Thai fish sauce and a squirt of Asian sesame oil. A little sugar was needed to balance out the acidity. This pico de gallo would have been nice with some diced fresh mango in it, but I didn't want to cut up our one remaining mango, so I skipped it. Cilantro might have been desirable, but unfortunately, that which we had was once again spoiled.
Now it has occurred to me that I could have used an SE Asian Chile-Garlic condiment in place of the jalapeños, but overall, it was fine as is.

The boneless pork loin cuts were placed one at a time between two sheets of waxed paper, on top of a heavy plastic cutting board, and gradually pounded to thinness with the side of a meat tenderizing hammer. I had to change the wax paper a few times.
As each cutlet was pounded thin, it was placed in a pie pan holding one beaten egg and about a half cup of milk. Nearby was another pie pan with a half cup of flour, seasoned with salt, black pepper and a big pinch of chile molido.


Meanwhile, our large black iron skillet was slowly heating on the stove with enough vegetable oil to cover the bottom 1/2 inch deep. I covered a large plate with a double layer of paper towel. A pot of Jasmine rice was already cooked and staying hot on the back of the range. Some green vegetables, in this case, Brussels sprouts and green beans were already cooked and awaiting reheating in the microwave oven. YVMV (Your Vegetables May Vary).


I had the flame under the skillet turned 3/4 full, and when the oil seemed hot, I passed an egg wash coated cutlet through the flour mixture and into the skillet, one at a time. It took less than a minute to cook each side to a golden brown, but using tongs, I turned it back on the first side to be sure it was done. The excess oil was drained off by holding it up over the skillet, then blotted thoroughly on the paper towels. The same was repeated with the other two.


When all were done and plated, this is how they looked. 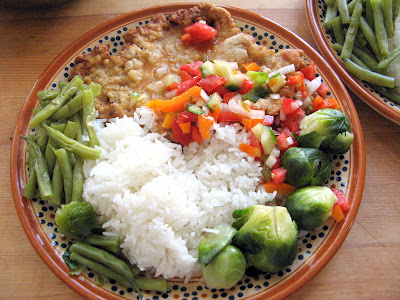 We added a few squirts of Sriracha Sauce to zip up the heat level a bit more. I drank a Monte Xanic vino blanco and some Vivolo Pinot Grigio, but beer would also go well with this meal.

you are great. thanks for the efforts you put into your blog.

For months I have not been able to find cilantro that has the characteristic flavor I remember. So often, it is too bitter and ruins a salsa. Is the cilantro in your area flavorful and true to what it should taste like?

I don't think cilantro benefits from being soaked in a solution, such as Microdyn, but I would not eat is unsoaked.

Kathleen, I don't have an answer. Much of the cilantro we get is thrown in with our vegetable purchases as a sort of lagniappe. Often it's on the last stages of withering.

Then the stuff we get in the mercado turns to brown-green, ugly mush due to lack of timely useage.

I have just inpired Doña Cuevas to start growing our own from seed. We shall see if staggered plantings will provide us fresh cilantro at a moment's whim.

PS: I wouldn't skip the Microdyn soak, but I'll bet that few taquerías do more than just rinse it off and shake it dry.