It may come as a surprise to newcomers that somewhat provincial Pátzcuaro has several specialty food shops. If you are looking for Asian sesame oil, or sushi rice, rice wine vinegar; where do you find them? What about fromage chevre or smoked provolone? Daikon radish? Eggplant? Brussels Sprouts? In this series of blog posts, I'll describe where to find these items. They are not to be found in the Centro Mágico, but in a workaday neighborhood, not far from the railroad tracks.


It used to be that you'd at least need to go to Morelia or Mexico City to locate these foreign foods. But it seems that the owners of a flourishing tienda de abarrotes in "off-Centro" Pátzcuaro realized that their more affluent clients wanted these foreign items, and made great efforts to obtain them.


The tienda is "Don Chucho's", well known locally, but unlisted in any guidebooks. It has been operated by the same family for over 50 years, the day to day operations having passed from the eponymous Don Chucho to his son, Octavio Mendoza Servín and wife Delia Guzmán Júarez.


The building itself is over 100 years old, though, of course, remodelings have taken place over the years, most recently a doubling of the sales space in about 2007. Several generations live in the house behind the store.


The customer base still consists of local people from the neighborhood around "La Estacíon", the old passenger railroad station just to the north of the store. The store itself is on a corner of Avenida Saltillo, (the "libre" highway to Uruapan) near a brightly yellow-painted pedestrian bridge.


The store stocks an amazing inventory of staple foods, canned goods, basic automotive needs (see the fan belts hanging from the ceiling), bulk spices, bottled salsas, canned goods, ice cream treats, charcutería and productos lacteos. I first learned of the store from the late Will Chapman and Jimmy Blackfeather Rose. It was recommended to me for its higher quality butter, made without aromatizantes. It was true, but additionally, there are two or three varieties of chevre and sometimes smoked provolone. Overhead, ropes of chorizo hang: a drier type, made elsewhere and a moister type, Don Chucho's custom chorizo de la casa.


Nearly every inch of wall shelving has some product on it. But we are there to see what kind of foreign foods they have. I'd first noticed Hershey's Cocoa Powder, but that's not too unusual, as several supermercados carry it. There are the aforementioned sushi ingredients (less the fish!) including nori; the sesame oil, various grades of olive oil, specialty vinegars, including  raspberry and balsamic; instant frijoles in a pouch! Just add boiling water? (Oh, well). 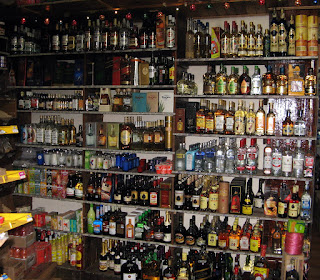 And this big, 4.5 liters bottle of Johnny Walker Black Label is offered at only $2300 MXP.


The price for these delicacies is a little higher than you'd find in Morelia stores, but you have the convenience of shopping closer to home, so it's worth it.


In the deli case near the "natural" butter is a delicate queso de yogurt of lacy texture. Every visit to Don Chucho's reveals more products, as you will discover.


Don Chucho's carries a small but select line of produce, displayed on the counter top, but if you want more, there's a nice little produce stand just outside, around the corner.


Need more and different cheese? A brand new, shiny Fábrica de Quesos opened across Av. Saltillo late in 2009. So far, the crema has proved to be outstanding and rich, and the cheeses we've sampled are good, but typically bland in the style favored in Michoacán. I mean to try their butter, when I have a chance.


If the sight of this food makes you hungry, you'll find several outdoor fondas along the streets, offering inexpensive meals. I've only sampled the fare at one; a plate of cerdo en salsa negra con frijoles, which was excellent, barring the belated arrival of utensils until I was halfway fnished. (I ate with tortillas.) Look for which fonda has the most people eating, and decide for yourself.


To complete (or better, to begin) your epicurean visit to this area of Pátzcuaro, go to Panadería La Espiga, a short walk from Don Chucho's, which I described in detail several years ago. It has the tastiest, wood-oven baked teleras in Pátzcuaro. Just be sure to get there before 10 a.m., earlier if possible.


View Pátzcuaro's Best Eats in a larger map
Posted by Don Cuevas at 10:30 AM

We use to have a similar type all inclusive gourmet hodgepodge store called Lo Tengo. It was located directly across the street from the new Mercado and Bus Station. It had all kinds of hard to find items but didn't carry auto parts.
It closed up because of local pressure from opportunistic individuals who were demanding protection money to keep the doors open.....the owners threw in the proverbial towel option not to lose a window or two.

Or it may have closed because it never had a customer in there or because the expiration dates on their wares were from the 19th century.

I was waiting for you to post that, Felipe. I would agree, plus the prices were ridiculously high.

IMO, another reason Lo Tengo went out of business, is that they were appealing to only one stratum of affluent customers; they did not have the everyday basic goods that Don Chucho's has; and for an upscale store, their location was poorly chosen. Should have been on the Plaza Grande. The next-door Mercado Tariacuri is one that never really took off.

In the end, Don Chucho's succeeds because despite all the frou frou Gringo Goodies, they are still catering to the local clientele. (Plus, their location is appropriate.)

I´m skeptical of Tancho´s reason for their closure. Who in the world would try to shake down a business that so clearly was earning nothing?

The info was from one of my reliable sources in town...but we all know what reliability is around town don't we.

I thought all the stuff in stores like that is past it's code dates?

Sausages and Tequila. What a mix!

Kathleen is Cooking in Mexico said...

It is mind boggling the ingredients I can now find in our little town, La Cruz, in Nayarit. A local store not only carries canned sauerkraut, but two different brands! There is almost nothing I can't find in Puerto Vallarta, provided I can afford the often exorbitant price.