In our wanderings up and around the Barrio San Juan, we missed a few things. (Come on, how much can two people handle?!)

After we got home, a Chowhound.com post on the Mexico Forum, by "StreetGourmetLA" directed us, belatedly, to Ricos Tacos Toluca, a fabulous taquería specializing in the chorizos and embutidos of the Toluca region. We probably had passed within a block of the place.
Well, hopefully, there will be a next time.

I then did a routine Google search, and rediscovered Nick Gilman's post on the area, in his blog, "Good Food In Mexico City", which I recommend to you. It has been my inspiration on many occasions. His focus was on Calle López, which we crossed several times, but didn't explore bottom to top.

Since it's breakfast time here, I'll describe our various breakfasts over the weekend.

Usually, I'd get up early, and check email at the desk in our suite while drinking Nescafé (for medicinal purposes only!) with some pan dulce from the Panificadora "Las Palmas", just down the street, between Revillagigedo and Luis Moya. It's a neighborhood place, but has rico pan dulces. I liked the "peinitas", or combs, a sort of cheese filled bearclaw.

Later, about 9 a.m., we'd go out for a walk and have breakfast. Saturday morning, we walked all the way to El Huequito, on Calle Bolívar. But we had to fuel up with good coffee before getting very far. Fortunately, the path was lined with coffeehouses. We stumbled upon the great little neighborhood place, "La Piccolina", at the corner of Luis Moya and Marqués Sterling, across from the Hotel San Diego. We received a warm welcome, especially from the Señora customer who takes her regular seat at the barra. The café con leche was rich and strong. We returned on Tuesday morning, for a full, hearty breakfast of enmoladas, huevos rancheros and chilaquiles verdes con pollo. With 3 or 4 coffees and a large jugo de naranja, it all came to about $260 MXP, if I recall correctly.
Below, the Café Con Leche. 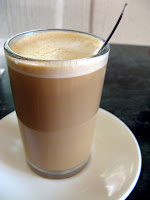 Below, the Enchiladas al Mole 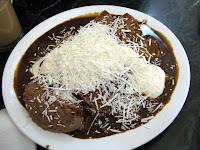 But on Saturday, we stopped only for a recarga de cafecito. We were heading for El Huequito, a classic taco restaurant and an old favorite of ours. (I forgive them their silly and annoying Flash animated website.)
It's in the true Centro Histórico, and east of the Barrio San Juan, on Clle Bolívar, between Rep. de Uruguay and Calle El Salvador, about a 30 minute walk from the Hotel Pal.

Although you can have eggs, any style, or a cup of fresh fruit with yogurt (as did Doña Cuevas), I went for the Tacos de Bistek Inglés, succulent and tender slices of filete de res in a lemon-Worcestershire sauce. To fill things out, I added a bowl of frijoles de la olla. They are some of the best I ever had. When la Doña tasted some of mine, she ordered a bowl, too. The frijoles are tender, whole, in a slightly thickened broth and deep, earthy flavor.
Below, Tacos de Bistek al Inglés 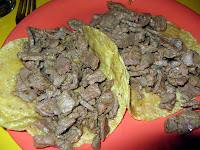 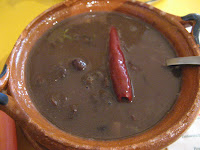 We returned on Monday night to El Huequito for dinner with our friend Larry. But that's another story.
Rating:
Food: *****
Service ****
Price: $-$$
Restrooms: clean

Sunday morning, on a tip from the owner of the Cocina Ángel on Arcos de Belén, we walked back up Luis Moya (which had become our main route to the gastronomic heart of the Barrio San Juan) and at Calle Ernesto Pugibet, turned right, there to find the Cocina Vianey, which features barbacoa on Saturdays and Sundays. This was a great, family place in the neighborhood. We were offered a fat taco of barbacoa de borrego as a tempter, and we sat down at a rear table with a gentleman customer.

We both ordered consomé de borrego and another taco each. I, one of pancita, which was subtly different. The tacos were rich but the consomé was primal. I had another half bowl, as well as a taco of espadilla, another cut of borrego. Total: $50 MXP
Food:*****
Service: *****
Price: $
Restrooms: didn't look.
A great little place of authentic, traditional Mexican fonda food, not to be missed. For non meat eaters, there are also quesadillas. 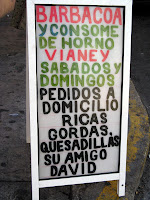 We passed on the Nescafé at Cocina Vianey, and went seeking some power coffee at La Piccolina. Alas, it was closed on Sunday morning. So we walked back toward Arcos de Belén and stopped in at the quirky Cafetería Doña Barbara, run by an ex lucha libre wrestler, "El Panda". It's an eclectic place, with a feel of the 40's, walls covered with photos of hollywood stars of that era, as well as El Panda memorabilia. We just had two cafes con leche, and they were fine. We haven't tried the food.

Monday morning, we stayed close to the hotel, as we were meeting our friends Luz Ma and Paco for a visit to some museums in Sta María de La Ribera, to be followed by lunch at Restaurante Boca Del Río. (Coming soon, to a blog near you.)

We breakfasted at Cocina Ángel, on Arcos de Belén, between Revillagigedo and Luis Moya which has had a number of names under various past owners. The owners' affability is not equalled by the food. It is inexpensive, though. Unrated.
Posted by Don Cuevas at 8:37 AM

Wow, thanks for allowing me to visit Mexico City with you!

Isn't it ironic that in a country where great coffee beans are grown and exported, Nescafe is offered in so many restaurants?

Kathleen, it's ironic, but appreciation for better coffee is growing, perhaps with the growth of a middle class.

I´ve been in that Calle Lopez area a good bit recently. It´s interesting.

Say, Felipe. We should get together for a cafecito next we're all in the area.