Rumors had drifted to us of a wonderful restaurant located in a small town with a hard-to-pronounce name. "Ziracuarétiro", somewhere between Pátzcuaro and Uruapan, 5 kilometers off the Autopista al Sol toll highway.

Among the rumors was that it "was the best restaurant in Michoacán."
The chef, Sra. Blanca Vidales Vega, is a prizewinner in regional and national concursos.

With stories like that, we had to visit it and dine there. At the suggestion of our friend and fellow foodie, Ron, we made a date to drive to Ziracuarétiro on Sunday afternoon. It was a very nice way to celebrate the arrival of Spring.

The restaurant, called "La Mesa de Blanca", is a delightful surprise to find, in beautiful, agricultural countryside of avocado, peach and mango orchards. The road debouches in the town, its skyline dominated by the bell tower of the church. After getting directions locally, we located the restaurant without much difficulty. 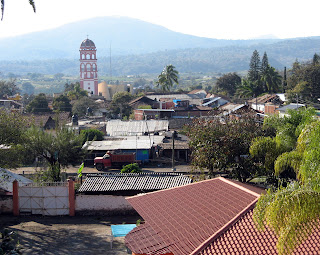 The restaurant La Mesa de Blanca is located on Avenida Ferrocarril. The approach via a tracks crossing, after passing through a typical, small Michoacán town streetscape.

Soon after crossing the RR tracks and leaving the pavement, we were encouraged to see a large, attractive building ahead. There was an ample parking area to the right.

At the big door, we were greeted by Sr. Rodrigo Lemus, husband of Chef Blanca, and some of the colorfully garbed staff. 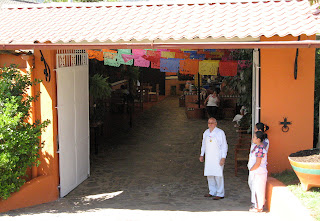 There are several dining rooms in this very large restaurant, most of which have green plants, open views to the town below and the green hills beyond. The main dining room has aquaria holding carp and perhaps goldfish. There is a big table with a display of choice bottles of wine, attractively flanked by antique kitchen implements. 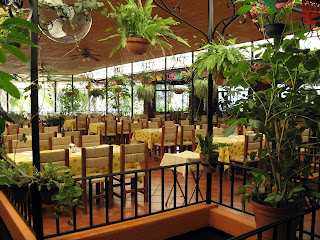 We saw two kitchens; the first, located in the broad entry hall, is an area for making carnitas, grilling meats, and the hand making of tortillas.
The second, principal kitchen, centrally located bewteen the entry hall and the main dining rooms, is dominated by big pots and many more cooks than the other kitchen. Pretty waitresses, clothed in colorful outfits, waited there to pick up orders.

Our hosts led us to what, if I recall correctly, is called "El Refugio", an elevated dining room beyond the service bar, with comfortable seating, cloth draped tables and a nice view. We were brought a dish of salsa, some nicely made pickled vegetables (crisp tender cauliflower, carrots, onions and rings of surprisingly mild chile perón.) There was also a dish of batons of jícama, with a small pool of a fruity salsa picante, When we asked, we were told that it was chile guajillo, but no fruit.

After taking our drink orders, mezcal for me and Doña Cuevas, after a tasting of two varieties; plus an agua mineral and a glass of vino tinto for our friend Ron. Later, we ordered a jarra de agua fresca, which, considering it was made from ripe zarzamoras (blackberries), a fantastic choice. In some ways it was a highlight of the meal. It was the best agua fresca de fruta we'd ever had. Ron also had a bottle of agua mineral.

The Botanas (Entradas) section of the menu held some interesting possibilities, among them Chiles Chipotles Rellenos de Queso; 3 pieces, of which we were assured that they were not muy picante; Tacos Mineros; 4 pieces filled with softened chicharrón; and although we were tempted by Chiles Capones Relleno de Queso, it was too similar to the chipotles, so we settled on some Guacamole. There, in the heart of the aguacate growing lands, what would be more apropos than a dish of a simple and excellent guacamole?
Also available were a couple of soups, a pasta carbonara(!), and an Ensalada de la Casa.

In choosing los Platos Fuertes: Ron decided, with my encouragement and the waiter's description, to have Mixiote de Cordero, seasoned lamb or borreguita steamed or baked in a parchment like pouch of the inner membrane of the penca ("leaf") of the maguey plant.

I looked over the menu, ignoring the Pescado Empanizado and Pechuga Empanizada as too ordinary; and I didn't want arrachera, as we'd just had it at home last week; I'm not a big fan of chamorro (pork shank); there's a small list of seafood cocteles, but those are something we eat all the time...so, I ordered Lengua a la Veracruzana.

Service was excellent and attentive. We had the attention of one older, experienced waiter and a very helpful younger man who spoke English.

Now, our evaluations of these dishes.
We all agreed that the Chiles Chipotles Rellenos de Queso were the best of the three botanas we had. They were spicy but not fiery. The Tacos Mineros were good tasting as well as being very attractively presented. The guacamole was fresh, simple, and had crunchy chicharrones with which to scoop up the guacamole. The portion could have been a little more abundant. 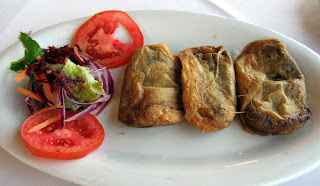 Of the platos fuertes, Ron loved the mixiote after it "grew on him" a bit.
I tasted the savory juices and it was something like birria in a maguey bag. This was probably the outstanding dish of the three we ordered. 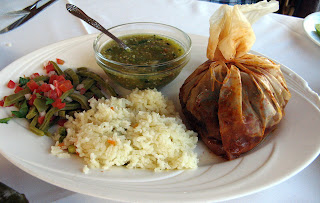 Doña Cuevas said the enchiladas were simple but good, accompanied by cubed potatoes and carrots, nicely garnished, and there was a large piece of thin, crisply cooked cecina to the side. 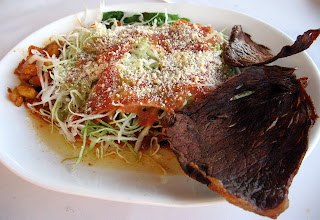 My Lengua a la Veracruzana was a satisfying, homey dish. The lengua was very well cooked and tender and the savory but not picante sauce had a generous quantity of capers, as it should. Oddly, there were no olives. 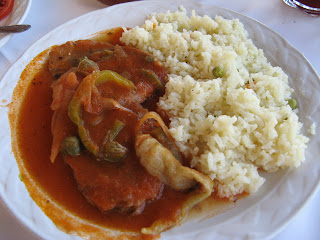 Ron and I split an order of a very nice, light, Pastel de Macadamia for dessert, and I had a pretty good, if overly large café express.

After dinner, Sr.Lemus and I chatted, in Spanish, English and German (he did, not I.) and I learned that his wife, Chef Blanca, was away that day, giving a talk in Aguascalientes. I wondered to myself if the food is even better when she is present. Ron, in particular, is always interested in specials of the day or of the season. I thought that if Chef Blanca were there there may have been yet more interesting items. So, we are obligated to return, with great pleasure and anticipation. We are also thinking of trying more botanas and drinks and maybe checking out the cocteles de mariscos.

Sr. Lemus also told me that they operated another, breakfast only restaurant toward the center of town, which he said "it's even better than this." It's called (are you ready?):

"El gorjeo de los aves en la mañana de abril."
(The trill of birds in the morning in April.")
Open every day, 8 a.m. to 12 noon.
I'm now wondering where to stay in Ziracuarétiro besides the pricey looking Hacienda Caracha. A resort whose Flashy website doesn't show prices, always a warning sign for me. 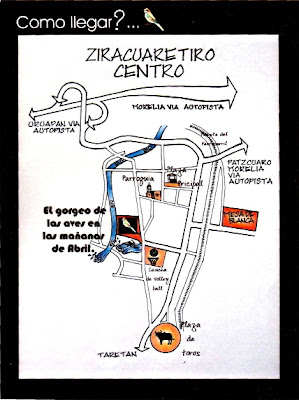 By the looks of your photos, the place looks really nice! Funny that Patzcuaro, being a bigger town, doesn't have anything comparable. The interior is clean and inviting and it will be one of my must see places soon!
Maybe when guests come so I can try to out fumble them for the check...but not too hard. Based on what the bill was for lunch at Hacienda Caracha, I don't think the rooms are too expensive. Would make a nice one night getaway.
Any idea of her culinary background?

Tancho, I don't know her culinary background, but I think she's from Ziracuarétiro and he's from el DF.

Here's a theory why such a nice restaurant is in Ziracuarétiro and not in Pátzcuaro: Z has affluent aguacateros and so forth, Pátzcuaro has artesanías and turismo.

We are hoping that you will join us on our next investigative trip there; but, what about the breakfast place, the "gorjeo de las aves, etc"? Is breakfast worth a special trip? I knw of at least 3 restaurants in Mexico where breakfast was a special meal..

I have a Plan!
We go in the morning and breakfast at El gorjeo, etc, spend the day in Uruapan, then return for comida at La Mesa de Blanca.
This will require rigorous training.
We need to get right on it.

The restaurant looks and sounds great! Can't wait to try it.

Bienvenidos, David,
I was so certain that you would like this restaurant, I had them reserve a table for 8 in your name.

We are delighted to be your guests! Muy amable.

Almost sounds like a great idea other than the caloric intake for those meals would probably exceed my quota....maybe taking some visitors to walk around the Parque Nacional in Uruapan , Then dinner may be doable....
Interesting about the observation of the available support for the dining establishment! Makes you a believer in going out to eat again!
And as always that you for your unselfish trek to unearth another great dining spot rated by Sr Cuevas!

My wife and I have eaten there just once, about two years ago, I think. The location is pretty, nice view. We both found the food mundane, not too bad, not too good, pretty standard Mexican fare.

On the opposite end of that same town is another beautiful restaurant. It sits on a hillside and has a great view too, though more rural than the view from La Mesa. This alternate restaurant is called La Hacienda Los Arcos. We like it way, way better than La Mesa, and we´ve eaten there many times.

Felipe, I do recall you writing about Los Arcos on several occasions. It's next on our list of places to try.

(But we do want to try that "El gorjeo de las aves..." place. The owner of La Mesa de Blanca said it was even better!!!)

Can you provide directions to Los Arcos, either here or by private email?

You are all tempting me again. But for the ankle, I would have been there the first week in April.

As you enter downtown, you have to make a left turn to go in the direction of La Mesa.

Don´t make that turn. Just keep going straight on through town, following your nose as much as that is possible. You´ll pass a Pemex station on your left. Keep on going. When town is behind you, and you´re in a rural area again, you´ll see Los Arcos on your left. Huge, snazzy place that is plainly visible from the road. Impossible to miss.

Gracias, Felipe. In fact, we'd started down that road by mistake until we got directions and turned around to go to La Mesa de Blanca.

I was there this past weekend. Very excellent..... that´s all I can say :)

DonCuevas said...
This comment has been removed by a blog administrator.
12:29 PM