Although there are a wealth of upscale dining choices in Mexico City, few of interest to us are in the barrio where we stayed. But it's a 20 minute walk to the mero Centro, where a wondrous world of dining unfolds. Or, you can take the Metro for 2 or 3 stations, and walk upstairs into the grand and dazzling space that is the Zócalo. We chose to take the Metro, boarding at Balderas and exiting at Isabel La Católica. From there, we walked approximtely 10 -12 blocks north to the Casino Español. 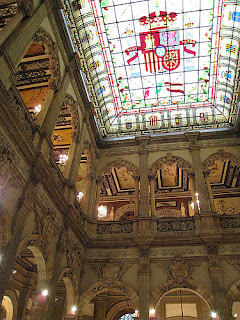 For about 2 years now, we'd wanted to dine at the Casino Español, a palatial edifice on Calle Isabel La Católica, between Avenida Madero and Av. Carranza. No architecture student myself, I can't pin down the elaborate style of the vast, vaulted halls and salons of the building. There are a lot or Moorish elements and stained glass. Fortunately, the dining room, on the primer piso, reached by elevators or a Grand Staircase, is much more conservative and soothing in mien. It's tastefully painted in calming tones of beige and pale yellow. The ceiling has numerous attractive recesses. The ample space is broken by only a few support columns. A somewhat incongruous note is the bank of industrial strength Carrier air conditioners flanked along the window wall.

After a brief wait in rococo but comfortable chairs on the mezzanine level, we were escorted to a nice table. We passed a service cart with two jamones serrano awaiting carving into those thin, tasty slices. (But although I like jamón serrano, I don't order it in restaurants because it does not in anyway demonstrate the creativity of the kitchen. Plus, it's costly as hell.)

Once at our nicely linen-draped table, our waiter pressed the wine list upon us. I deferred ordering the wine, as I prefer to know first what main course we'd be having. We were already very inclined to all seafood, as we'd already consumed an unusual quantity of meat in two days. We were brought crusty bread, herbed butter that looked a bit tired and filmed over, and a dish of lovely green olives. 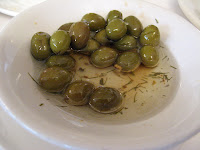 So, we ordered a bottle of Albariño from Galicia ($350 MXP) and began making our choices from the extensive menu. Our waiter brought a wine bucket with ice, and made sure that the bottle was chilling nicely.

Among the entradas, one stood out for us: Pulpos a la Gallega de Feira. We'd last had that wonderful simple dish prepared properly while overlooking the Mar Cantábrica, in the tiny fishing village of Puerto de Vares, the northernmost point in Spain. Since then, other attempts in marisquerías in Mexico had left us unsatisfied, for their interpretations were more in the nature of sauteed octopus with sweet peppers,
But the pulpos at Casino Español were tender perfect, served in the classic manner with a little olive oil, a sprinkle of coarse salt and a dusting of picante, smokey, Pimentón de La Vera. (The last is one of my favorite condiments.).
The only small flaw was that the accompanying boiled potatoes had been cut very small and were overcooked. But, it was a great starter, in spite of that.
Pulpos a la Gallega. 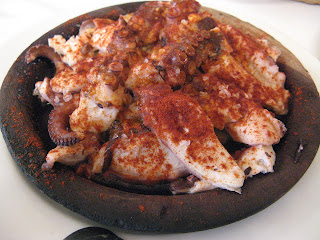 We both ordered soups to follow the pulpos. Doña Cuevas had a Sopa Castellana, which is basically a Sopa de Ajo, plus bits of chorizo and jamón. She enjoyed it, but wished the bits were a bit bigger.
I had a modest but good Caldo de Mariscos, thankfully bone-and-shell-less. It was nice, but not somethng I'd order again. The stock was a bit oversalted.

It was very difficult to choose a plato fuerte. We finally decided on Lomo de Huauchinango estilo Muiña. At least, if I recall correctly, that was its description.

It was plated on a "mirror" of a saffron sauce and garnished with a few shrimp, a couple of clams and a heap of surimi anguillas. The latter were striking to see, but had little taste. I ordered some arroz blaco to help take up the delicate but tasty sauce. 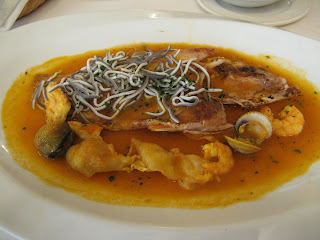 We ordered two bottles of agua mineral, and they were long in coming. Actually, when the first came, they were "still" water, not sparkling, so we sent them back.

Dessert was not on Doña Cuevas To Do List, but out of a sense of duty to my blog readers, I ordered a Tarta de Almendras Asturiana. It was essentially the same as Tarta de Santiago; a gooey almond tart, in a pool of Cream Inglesa accompanied by a small scoop of vanilla ice cream, We also had cafes Americanos, which were of good but not great quality. 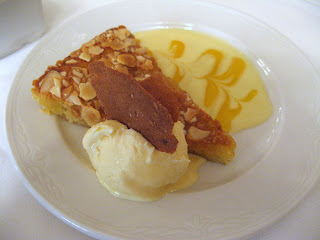 We had prepared our minds for a staggeringly large bill, but it came in at "only" $980 MXP, of which you'll recall, $350 was for the wine. We gave a generous tip, not enough for our waiter to retire on after the shift was over, but he gave us a pleased look.

Ratings:
Food: **** out of 5
Service *** 1/2 (We had to request several small things more than once. Noted, the restaurant was very busy.)
Ambience (special category):*****+
Restrooms: Fine. Attendant present. Bring change.

PS: There was live music, from a rousing, hearty troupe of estudiantinas, but we were not fazed because we were finishing up as they started their good and hearty fellows rounds. A classical or Spanish guitar player would have been preferred, but it wouldn't have reached across the vast dining room.
Posted by Don Cuevas at 7:47 AM

Place looks familiar. I think I ate there with my first Mexican girlfriend in 2000. Nice write-up, señor.

Taking a look at the grand architecture of the establishment leaves me in a quandary.
It appears that the detail work of the place would not be able to be recreated in todays dollars, at least not in some reasonable justification.
You are lucky that you were able to experience the surroundings and substance of the place. Kinda of makes you appreciate what was yesteryear......