Restaurante Boca Del Río, on Ribera de San Cosme, Colonia San Rafael, is a cherished Mexico City dining spot. It began operations in 1942 as an ambulant cart on the streets. Since then, it has grown to include the original restaurant, #42 San Cosme, and a new branch in la-di-da Polanco.


The restaurant was far out of our walking range of our hotel*, but our dear friends, Luz Ma and Paco came by in their car to carry us there. First, we paid our cultural duties with visits to el Museo de La Geología, at La Alameda de Santa María de La Ribera; then, a walk through the Museo de Arte San Carlos, on Avenida Puente Alvarado. (Which is actually the same wide street as San Cosme, but it changes names at Avenida Insurgentes.)

*We could have arrived there by taking Metro Balderas to Metro Hidalgo, transferring to Linea 2, direccíon Cuatro Caminos, and exiting at Metro San Cosme. But it was nicer to ride in the car, looking at impressive buildings, especially along Paseo de La Reforma. 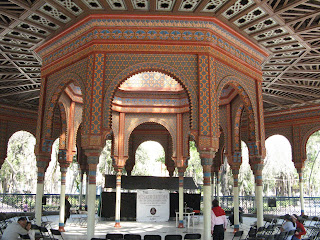 
After some skilled navigating, Paco got us to the estacionamiento behind the restaurant. We entered through the utility and delivery entrance, past prep tables and check-in scales. I liked that.

The dining room is vast, and I estimate that it could hold several hundred diners. The style is 1960's glass, Formica and chrome trim, on a background of stainless steel. 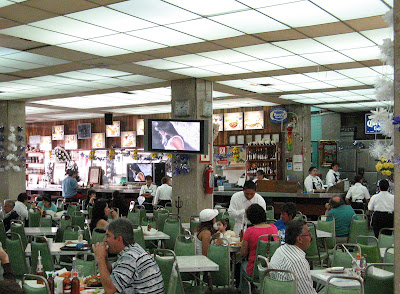 The menu, as anticipated, was lengthy. It can be seen on Boca Del Ríos own website, but it's more accessible on Queremoscomer.com.mx


I already knew that I wanted something chilled, and relatively light, so after very little consideration, I ordered a large Ceviche Vuelve a La Vida, sin ostiones. Raw Mexican oysters and I have a bad history that goes back many years.

Luz Ma requested one of her favorites; Filete de Salmón asado. Paco ordered a Coctel de Jaiba, sin cilantro, and then a nice Mojarra Dorada, bien cocida.
Doña Cuevas started with a small Coctel de Camarones al Natural. (Simply, peeled cooked shrimp in a glass.), and for a main course, Pescado Empapelado. She asked the waitress of what species of fish was it made, and the favorable answer was "mero". In our opinion, the farmed blanco de Nilo filets used by many seafood restaurants, including our querido Mariscos La Güera in Pátzcuaro, are devoid of both taste and texture.

I enjoyed the ceviche, but I would have liked it less condimented. It was difficult to distinguish the individual flavors of the parts.
Everyone liked the dishes they had chosen. Señora "Ojos Grandes" couldn't finish every bite of her pescado empapelado, it was so much.
We skipped dessert and headed back to the hotel. A little later, la Doña and I went to the Parque Tolsá, across Balderas, and I smoked a fine Puro Robusto Maduro de San Andrés Tuxtla, Veracruz. I'd bought it at "El Paraiso Del Fumador" (formerly Puros Hermanos Petrides), in Centro, on Calle Rep.de Uruguay.
Ratings for Boca Del Río
Food: ****
Service: *****
Price: $$-$$$
Restrooms (Hombres): Slightly rough around the edges and in the cracks.
Posted by Don Cuevas at 9:13 AM

Nice to see that it has not changed any in the years. It was one of my favorites places to go in DF, only trumped by Panchos Tacos close to Chapultepec.

¡Que padre, Tancho! We once went to Los Panchos, in Colonia Anzures, by taking the Metro to Chapultepec Station, then walking.

Doña Cuevas said the tacos were good, but I had to limit myself to caldo de pollo, as I was unwell that day.

That was back in the 90s. Seems like last century...

Don Cuevas: That map really doesn´t tell me anything much regarding the location of the restaurant.

Felipe, it's true what you say. These technologies are still emerging and I'm gradually getting a grasp of how to embed Google Maps for maximum effectiveness.

Every day, I discover a new gizmo that Google has provided us. It would take an inordinate amount of time to use every one of those tools, but I can do more and more as I become accustomed to them.

In this case, I made the "pushpin" for the restaurant Boca Del Río a red one instead of a blue one. I am tentatively placing the knife and fork icon on eating places, but they are colorless and don't stand out.

Here's a tip, something I learned myself only yesterday: click the link under the mini-map that says "View Mexico City, D.f. in a larger map.

When you do that, a customized map will appear, and in the left hand panel, there will be a list of places I've placed on my customized, Mexico, DF Google Map. Among the places you'll see Boca Del Río. Clicking it will make the red pushpin expand. In the expanded "balloon" is the address and, in this case, a link to their website.

Naturally, you are already aware of Google Maps Street View, ¿verdad? With a little patience, you can navigate in Street View and actually see the facade of the restaurant.

Just imagine, you are getting all these fruits of Google's labors plus mine for not even 1 centavito. ;-)

PS: Of course, I can put the address in the text of the blog as well. I'll do that in a moment.

Mire, Felipe, the address was already there, in the first paragraph.

You should be able to get there within 20 minutes from your condo, depending, of course, on traffic conditions.