A Colorful Comida in May

Dinner for 6 after the Concurso de Las Bordaderas at Santa Cruz, Michoacán. May 19, 2010
Menu
• Cool Roasted Red Pepper and Tomato Soup, olive oil croutons, goat cheese with fresh basil and thyme
• Cazuela de Milpa (Calabacitas, Granos de Elote, Chile Poblano, Nopalitos, y Dos Quesos)
• Black Bean Carnitas Cakes, Lime Cilantro Crema, Salsa Verde
• Agua de Jamaica
• Melón
For this meal, almost all was prepped ahead. The soup was made 3 days before, the black beans started 3 days earlier and the bean cakes themselves made up and refrigerated the evening before. Only the cazuela was made entirely in the morning, up to the point of baking it in the oven. In this way, it was possible to attend the Concurso, drive home (15 minutes) and enjoy the company of our guests.
The soup is derived from various Internet recipes with several modifications, of course.
Cool Roasted Red Pepper and Tomato Soup
5-6 large Red Bell Peppers, Whole, broiled or charred over an open flame. Peel, seed and cut in half. Bake slowly with a little olive oil, sea salt and sprigs of fresh thyme until just tender. (I recommend this progression, even though I did it differently, and had to leave most of the skins on. But it didn't hurt anything.*) 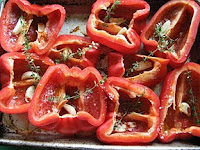 For the tomatoes:
A kilo of Roma tomatoes (here called Jitomate Saladette, cut in half lengthwise, slowly roasted for about 1 1/2 hours at 325º F, with a drizzle of olive oil, sprinkle of sea salt, sprigs of fresh thyme. They should start to appear wrinkled and very little juice coming out. 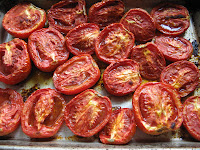 6-8 whole, peeled garlic cloves, or more, to taste. Roast with the tomatoes.
For the stock:
1 Yellow Onion, Minced
A couple of cloves of Garlic, optional
1-2 Carrots, Sliced
1-2 Celery Stalks, Diced
1 small to medium Potato, skin on, diced
A handful of fresh Parsley
2 liters of water
Two Knorr-Suiza Chicken bouillon cubes (optional. If omitting, add salt to taste.)
Pressure cooked 15 minutes on low pressure. Slow cooldown.
For the garnish:
Sliced rounds of mild goat cheese on olive oil artisanal bread croutons (I bought teleras from Panadería La Espiga) as a garnish. The goat cheese rounds were marinated for a couple of hours in extra virgin olive oil wth the basil shreds and more thyme.
Basil leaves, about 8 or 10 8 snipped in chiffonade style, reserved for garnish, as part of the goat cheese marinade.
Seasonings:
1 tsp white pepper if you wish. I used no pepper, but instead, 2 or 3 types of Pimentón Español: an unsmoked dulce, from Murcia; Smoked Pimentón de La Vera Agri-dulce, and Pimentón de La Vera Picante. I think also a little unsmoked pimentón picante from Murcia. The latter gave the soup a bit of an edge.
A few teaspoons of dry sherry or better, sherry vinegar.
Putting it together:
When the components have cooled sufficiently, the solids and stock are combined in stages in the blender. Do not fill more than halfway. I also place a heavy plastic bag over the mouth of the blender jar to restrain splashouts. You may also do the blending in one large bowl using a stick/immersion blender, but that my take longer and the results will not be as fine.
Taste and adjust seasonings.
Chill until an hour or so before serving.
Presentation:
Ladle soup into small bowls.
Place a few olive oil croutons on each serving. Carefully place a round of herb marinated goat cheese on the crouton/s. 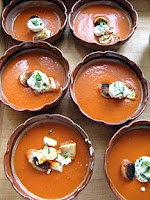 ****    ****    ****
Black Bean Cake with Chunky Guacamole and Lime Crema, by Emeril Lagasse, 2000 on the Food Network.
I followed that recipe fairly closely, using carnitas instead  of the ham hocks, and using cornmeal for half the coating flour. For the crema, I used Mexican crema form the Fábrica de Quesos on Av. Saltillo in Pátzcuaro, across from Don Chucho's. Afterwards, I think sour cream would have been better, especially the reduced fat variety. 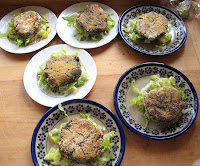 Cazuela de Milpa
The cazuela was derived from the Santa Fe Hot and Spicy Recipe Cookbook. It consists of large dice of calabacitas, onion, garlic, corn kernels (I cheated and used canned sweet corn), roasted green chiles Poblanos, and cooked, diced purchased nopalitos**. All is sauteed in butter or olive oil (I used OO), seasoned with S&P, orégano and ground cumin; placed into an ovenproof casserole (choose one with ample surface so that excess liquid will evaporate; topped with coarsely grated or cubed cheeses***, and baked 15-20 minutes until the cheeses are melted and bubbly. 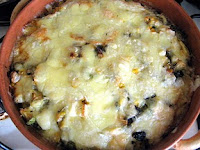 Notes:
* Note that it would have been easier to peel the peppers if they had been broiled in the oven or over the gas flame. Of course, the optimum results would have been to broil them over a wood or charcoal fire.
**Add nopalitos after the other vegetables are cooked to a crisp tender stage.
*** Two-thirds Mexican Queso Manchego and one third Tillamook Sharp Cheddar.
Posted by Don Cuevas at 7:12 AM

Wow, yum. I'd definitely like to try making the soup, especially now that I have a neat immersion blender. The cazuela has my name written all over it too. Did you use a clay pot? Do you think that matters?

Lesley,
The cazuela de milpa vegetables were first sauteed in a very large cast iron skillet. The combined vegs were baked in a Europays (?) pottery baker, with the cheeses on top. I was given that baking dish by my former employers when we were opening an artisanal bakery and Euro deli, back in 200. I can't find the name of it.

You can use Pyrex or Pyroceram, it will be fine.