The pivotal dining focus of our weekend was the much lauded Rosetta, a northern Italian restaurant located a short walk from our hotel. We'd congratulated ourselves on being able to get a greatly coveted reservation for five (we were joined by our friends Luz Ma and Paco).


The building and its interior are beautiful, and the food is presented simply but attractively. However, our experience was marred by crowded seating and noise in the atrium dining room. The food was good, based on fresh, seasonal offerings, but often very simply and carefully prepared, and with high prices. It was an experience, but not one we'd be likely to repeat soon. The highlights of the meal were, in my opinion, the house baked breads and the coffee. What came between was often enigmatic. I'm not accustomed to paying high prices for such understated food and in such modest portions.

Details inside...
When we arrived at Rosetta, a staff member was selling breads, pastries and conserves outside. One of Rosetta's great strengths is its in-house bakery. Since it was only Saturday, and we weren't leaving until Tuesday, we didn't buy bread. Inside, every table receives a wooden tabla of breads with extra virgin olive oil. The tall, graceful, grissini are spectacular, but I preferred the beautifully made focaccia, with an open textured, moist interior. The denser Sourdough bread is flavorsome, too. 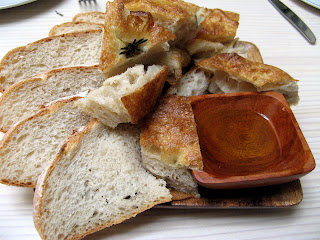 We were shown to our table in the very tall atrium dining room. One seat was under the branches of a potted plant. (We had expected two more persons, but they couldn't come. So our tables were oversize for our group.) The dining room is longer and taller than it is wide, which made for traffic jams for both servers and guests. The noise made conversation difficult.

I had a Campari & Soda ($77 pesos) which was very good, and Ron a Cinzano ($48) and a couple of bottles of Acqua Pellegrino ($75 pesos each), which was not cheap, but even I could appreciate its superiority over local aguas minerales.

For appetizers, Ron and Doña Cuevas both ordered Pulpos Laminados, which is beautifully presented.  The taste was mild and very subtle. 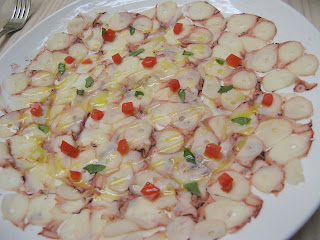 Luz Ma had a Minestrone with precisely cut vegetables which looked attractive, but I didn't get her opinion of the soup. 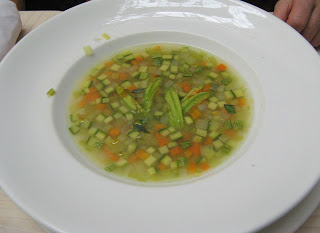 Paco started with a bowl of Tortellini in Brodo. It appeared to be richly concentrated and satisfying.

I chose an Ensalada de Alcachofas con Parmesano, which had very nice salad greens, although the artichokes were mere shavings. 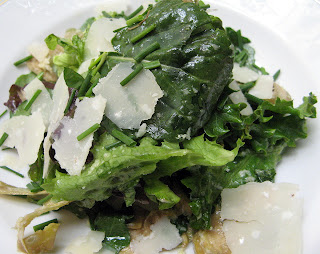 I had a hard time selecting a glass of wine, due to sticker shock. Finally, I found a Macon Villages '09 for a mere $85 pesos.

We spent some time selecting our main courses. The 12-hour braised beef shortrib was tempting, as was the "Lechal con Romero", or suckling lamb with rosemary. But in the end, both Paco and I chose something lighter: Robalo en Costra de Sal y Hierbas. (Filet of robalo fish baked in a salt and herb crust.)

Ron, always a sucker for lamb, chose the Lechal.

A closer look at the main courses:

Robalo: an intriguing and mysterious presentation, as the green shell was removed, to reveal the fish inside.

The fennel shavings under the extraviado weren't discovered until almost the last bite. They were "extraviado"!


I had a taste of Ron's Lechal, and it was extremely tender and herbal. Ron liked it, but opined that such intense herbal treatment would have been better on more mature lamb.

Luz Ma's Lengua was something like a New York Deli meat, but with an Italian twist. She offered a taste, of the very thin slices lightly cured with salt. I didn't notice any anchovies. I'm not sure what the herbal green mound is in the middle of the plate, but it looks good. I wouldn't choose this for a main course, but maybe as an appetizer to be shared.

Deli-wise, note that a Corned Beef Sandwich on Pan Campestre (Centeno-Rye?) is on the menu.

On to dessert:
Ron had a Granitá de Almendras y Cerezas, which pleased him.

The rest of us split two orders of Cannoli  (3 per order), with a chocolate sauce on the side. (I am a huge cannoli fan.) The cannoli themselves were good, the crisp tubes just right, the ricotta filling might have been smoother and thicker, and the candied orange peel in the filling was good but dominated the dessert. The slightly foamy chocolate sauce was distracting, and had a bit too much salt.
(Sorry, no photos of the cannoli.)

Café Americano was among the best I've ever had anywhere; rich flavor and aroma, and hot. But it arrived as we were finishing up the last of our desserts.

I'm having a hard time deciding on a rating for this restaurant. One factor is that in spite of knowing in advance that it would be expensive, I still had difficulty coming to terms with the pricing for what is essentially very simple, although carefully prepared food. The motif is understatement, and whether the prices can be justified, may be a personal decision of the part of the client, and the depth of their pockets.

Still, I calculated the averaged share per person of our dinner, and it came to about $563 pesos. Put into U.S. dollars, that's just $50, including drinks and tip. So, if that's what you are accustomed to, you may well feel comfortable with Rosetta's prices.

I enjoyed the evening, and the food and service were superior. It's just that this style of cooking may be far too subtle for me to fully appreciate.

Ambience: pleasant, but marred by crowding and noise. (There is, we think, an upstairs dining room. We hope it is more comfortable than the ground floor.

The Pulpos Laminados look identical to the pulpo carpaccio served as a Costco sample yesterday.

We must hie ourselves to Costco; probably this Wednesday, and check it out.

I'm betting that it's less costly at Costco.