Parque México is the green heart of Colonia Condesa-Hipódromo. I confess; I don't know where one colonia ends and the other begins. But it's one of the mellowest areas in el D.F.

The Parque is defined by the course of the former horse racetrack. Avenida México takes an elliptical course within the outer ring of Avenida Amsterdam. Parque México is surrounded by every sort of café and restaurant imaginable, with the possible exception of Mexican restaurants, as Nick Gilman implies in his Good Food Mexico City blog.
While I was planning and plotting the Nibbling La Condesa walking tour, word flashed over the Internet that famed but distantly located Azul y Oro had opened a new location close to the west side of Parque México. It was alluring, but I was in email contact with Nick, who gave it a lukewarm review.

We'd already decided to improvise a picnic in Parque México foraging native ingredients as we found them.

We began our walk at the Hotel Milán in Colonia Roma Norte to Plaza Popocatéptl, near which we located the classic Art Deco Edificio Basurto and the venerable Flor de Lis, famed for tamales. But as two of us were already stuffed with tamales, and all craved coffee, we homed in on the French bakery café, Le Pain Quotidien, on Av. Amsterdam at Av. Celaya.

The ambience at LPQ is casual French Farmhouse, with recycled wood for carefully "unfinished" rustic furniture, cabinets holding confiture, and bread racks supporting flour-dusted boules of peasant bread. The centerpiece is a long communal table on the mezzanine level. When we arrived, we were the only patrons at the table. Toward the end of our breakfast, the table was two-thirds full. I felt very much at home there. It evoked memories of a much smaller bakery cafe where I'd once worked.

The breakfast menu has soft boiled eggs! Although it's a dish which I don't care for, I have never before seen it offered in Mexico.

We began with café au lait (served in the traditional china bowls), we ordered breakfast according to our needs. Ron asked our waiter about quiche. Quiche Lorraine was available.

Sra. Cuevas had a goblet of fresh fruit and yogurt topped with granola, and I ordered a basket of assorted breads and spreads to share.

Ron did not like the soggy crust on the quiche nor the insipid bits of ham mixed with the bacon. But the salad was good. The fruit cup was very good, and the breads enjoyable, especially the sour rye and the fruit and nut bread. There was plenty left to take along for our picnic.

We continued more or less southward, on Av. Amsterdam. There were some little amusements. First this, then this.
Our goal was Maqúe, a very cute pastry shop and café at Ozuluama #4. En route, we stopped to enjoy the fountain of Plaza Cilatépetl. 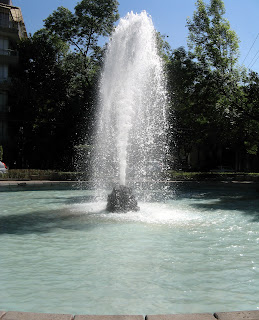 We arrived at Maqúe, but the lines were long and we did not want to wait, so we started northward again, this time following Avenida México.
As we passed various cafes, the waiting lines lessened, and we were able to get a table outside at Caffe Toscano, at Av. México, corner of Av. Michoacán. This place made the best espresso of our visit. (Another good espresso was at Café Emir's new Calle Córdoba branch in Roma Norte.)

At the risk of breaking the spell of Condesa, we walked east on Av, Michoacán to Bistrot Mosaico, where we rediscovered the deli counter as well as the restaurant. We decided to buy some Paté Casero. Something like this. (Yeah; I know. It looks like meatloaf. But it tastes even better.)

At the gourmet corner of Av. Michoacán and Av. Insurgentes Sur. stands the La Naval wine and food emporium. Inside, we looked over the extensive selection of wines and cheeses. We picked up 4 mini bottles of various red wines and chunks of both Emmenthaler and Queso Manchego Añejo to take with us. We also bought some plastic plates and glasses. There were no forks, and we'd have to eat with our fingers. Oh, dear! But we did have alcohol hand wipes to clean our hands before eating.
Ron claims food tastes better when eaten with the hands, so we were in good shape.

We crossed Parque México again, for our obligatory homage to the new Azul Condesa located at Av. Nuevo León # 68. Then we returned to the Parque and found an unoccupied bench. Not far away, a small Klezmer band was playing. We laid out the food as best we could, and dug in. It was a good lunch, and fun. I now suppose we could have picked up some fruit to go with the cheese, at the Superama on Av. Michoacán, on the west side of the Parque. But we were content.

After lunch, we leisurely walked back to the Hotel Milán, passing up the proposed stop at Pastelería Suiza, on Av. Álvaro Obregón.
We stopped for a short visit to the Mikasa Supermercado Japonés (video) mostly for Ron.

We had a light dessert at Neve e Gelato on Plaza Luis Cabrera. Maracuyá and Mandarina nieves are among those we recommend. Helado de café less good.
CLOSED, last time we looked.

Plaza Cabrera is not far from our hotel, where we took a well deserved nap, awaiting the next episode in our weekend.

Next: an evening in "Veracruz"

Why, oh why, don't we have food like this in Morelia?

Does Autovias have WiFi on its buses like ETN?

Jennifer, I don't have an answer to your first question, other than Mexico City is more cosmopolitan than Morelia.

As to Wi-Fi on Autovías buses, some have it, some don't. Our returning bus had it, but it was password protected and I couldn't use it. It apparently operates on an IUSACell-Blast system. Apparently a cellular network.

I think ETN has more consistently functional wi-fi aboard.

By the way; Parque México has wi-fi about the park, but alhough my mobile device could "see" the router, I would have had to sign in as a subscriber on a Prodigy web page. I'm not a Prodigy subscriber.

Of course like eating in Chicago or New York or Montreal - DF has the muy bueno eateries. Lucky you amigo.

Sr Cuevas,
Loved the photo of the display of LPQ! I can almost smell the yeasty goodness of the boules! One can only hope that the crust matches my memories of a good loaf fresh from the ovens! Thanks!
Dan in NC