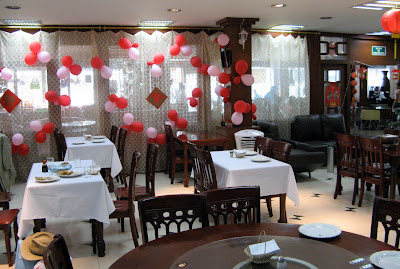 In the late morning, we made another visit to the Mercado San Juan and neighboring shops. The visit was bookended with two Twisted Taxi rides.
Our shopping list was light, and we spent less time at MSJ than usual.

Our dining goal was the Mojing Comida China restaurant, first reported by Nick Gilman as "The Real Thing". It's located at the corner of Calle Humboldt and Artículo 123, south of the Alameda Central, and a block from Metro Júarez station. We could have walked there from Calle Ayuntamiento and Balderas, but we did not know that when we hailed our second Twisted Taxi of the day.


The restaurant is somewhat hidden behind a large furniture store on Artículo 123, with a dire looking colony of homeless men across the street; or better entered by way of the Centro Comercial de China, around the corner on Calle Humboldt.

The dining room is large, and when we arrived soon after 1:00 p.m. on Monday, almost empty of other customers. The staff was sitting down to lunch around a huge bowl of noodle soup. An English speaking young man customer helped us communicate with the staff, who have limited Spanish and no English.
Fortunately, the menu is illustrated with color photos of the dishes, but as we found out, the food is not always congruent with the photos and Chinese and Spanish descriptions. But we managed to choice a reasonably satisfactory meal although there were a couple of duds in the progression.

We started with a dual dumpling order of both steamed jiao-tze and fried guo tieh. The first are steamed or boiled wheat flour dumplings, with a filing dominated by a chopped green vegetable; the guo tieh are essentially the same, but their bottoms are pan fried to a more or less crusty brown. We have eaten hundreds of these dumplings over the years, and I'd rate these as satisfactory but not of the top ranks.

I was thrilled to see scallion cake on the menu, something which we have made at home: the photo implied a many layered pan fried pancake with chopped green onion flecks in the laminae. Unfortunately, what arrived was a thin, crispish, one layer disk. It was pretty tasty, but lacking those manifold layers, was texturally deprived.

Here's a better version and how to make it, by Passion-baker Phoebe.(We always use Oriental sesame oil for anointing the layers.)

Ron ordered Crispy Squid with Salt and Anise, appealing, although the anise was elusive. Sra. Cuevas got a bowl of a noodle soup, which was large enough to share, and although it had an abundance of noodles, greens and some scrambled egg, it was lacking in depth of flavor. Some chopped green onion and a few drops of sesame oil would have enhanced it.

I requested the Camarones con Sal y Ajo. Those were a tasty dish, but hardly fit the menu description. The dish consisted of jumbo shrimp in a tomato based, slightly chili and garlic sauce. The shrimp had a notably iodine taste. However, we didn't have any problem finishing it. 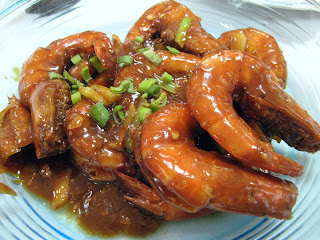 Our last item was a pleasant dish of stir-fried mustard greens with garlic. The vegetable lacked the pungency of mustard greens, and the taste more resembled loofah, although lacking loofah's slippery texture.


In conclusion, it's worth a return visit, but at a busier day and time. It seems to me the sort of restaurant that if you go several times, get to know the menu better, and the staff becomes more helpful in suggesting dishes. However, there is definitely a language challenge for us.

Food: ***
Beverages: Tsingtsao beer available. Other alcoholic drinks from $70 pesos. Sure, the have tea, but we didn't order any, as we were seriously buzzed from coffees elsewhere.
Service: ***
Price: $$-$$$
(Our check was $750 pesos, plus a tip. We could have skipped the scallion pancake and the soup.)
Ambience: Spacious, suitable for large groups.
Rest Room: Small but adequate. Could be improved.

Yum! Had to enlarge those shrimp - great photo and now I am hungry ;-)

Not enough Chinese restaurants in Mexico.

Muuum..good photos, makes me want some Chinese food!
I did a click on the street view. Seems that corner is a popular overnight sleeping location....hopefully they will not be there during business hours.
There is a good Chinese restaurant in Morelia on Viaducto across from a few doors away from the wedding dress place. Give it a try next trip into town. Probably not anywhere near the DF quality of eats.

Tancho: the overnight sleepers were present in numbers the day we were there. The furniture store lies between the restaurant dining room and the homeless. The view is obscured from within the restaurant, but they are there.

I don't know a Chinese restaurant in Morelia on Viaducto, because I don't know Viaducto in Morelia. I do know of one (Fa Yiang) on Camelinas, one on Blvd García de León (China Elegante), and one buffet place on Enrique Ramírez just north of Artilleros de 1847, sort of across from the new Sears.