It has been a couple of years since we spotted the Restaurante Carácuaro from our Mexico City bound bus. I was intrigued by the yellow, tile roofed building on the western periférico highway of Morelia. There's another restaurant of the same name and family, on Calzada La Huerta, at la salida a Pátzcuaro, just before the overpass bridges.

We passed the restaurant during several more bus trips, and some Web research yielded sparse results. All we knew was that it featured La Comida De La Tierra Caliente. A comparison with the venerable Fonda Marceva in Morelia Centro is inevitable.

It wasn't until last Thursday, September 22, that we joined our friends Peter and Tere for comida at the Carácuaro.

The dining rooms are somewhat "downmarket" but not unattractive. We chose to go up to the mezzanine dining area to escape the street noise coming into the screened windows as well as the tv blaring near the bar.

Our pretty waitress, dressed in flowing white traje with color accents brought us botanas of salsa, totopos, (tortilla chips), requesón cheese (similar to ricotta) and crema. Of the two salsas, one was muy picante, the other less so. Both were good. This was a nice touch, and a highlight of the meal.

We were then brought some toqueras, roughly milled, fresh corn pancake. I'd left the table to go wash my hands, and when I returned to my toquera, it had cooled and toughened. Still, it was good with some salsa and crema on top.

Contrary to the usual form, our waitress did not take or drink orders until some time had passed. When she did, Tere and Doña Cuevas shared a half pitcher of naranjada, Peter had a michelada preparada con Clamato; and I a very nice mezcal accompanied by slices of orange sprinkled with coarse salt, plus a bottle of agua mineral. Peter commented that the michelada preparation came with the cerveza alongside; a nice touch, I think.


Who could pass up an appetizer with the name "Chavindecas"? Not I. It consists of two soft tortillas with your choice of bistec, pollo or chorizo, moistened with thinned crema and covered in a chopped salad of lettuce, tomato, onion, I think, and avocado plus crumbled queso fresco. Overall, not bad, but the sum of the parts was underwhelming. It may be a relative of the Sonoran-Arizonan "chivichanga" or "chimichanga". The latter are fried burritos heaped with salad, guacamole and sour cream. I couldn't finish my chavindeca, mostly out of boredom. I wanted room for what was to follow.

Peter and Tere shared an impressive order of uchepos. Unlike those at El Gorjeo and La Mesa de Blanca in Ziracuaretiro, these were more salty than sweet. They were smothered in crema and queso Cotija. (I may be wrong about the type of cheese.)

On to our platos fuertes, Tere went all out and selected a Pechuga Empanizada Rellena de queso, jamón, chorizo y camarones. It was even richer than anticipated. It's the over the top Carácuaro interpretation of Chicken Cordon Bleu.


Peter tried the aporreadillo, a traditional dish of la Tierra Caliente of shredded dried beef, scrambled eggs and a picante salsa. He reported that it wasn't his favorite version, for the reason, among others, that the salsa was too soupy.

Doña Cuevas had Mole de Pollo. Oddly, only thighs and legs were available. The mole was good, but not outstanding. It came with a side of the most peculiar corundas we'd ever seen. They were flat and wrapped in banana leaves. Unfortunately, the masa was dense, salty and completely unappealing. 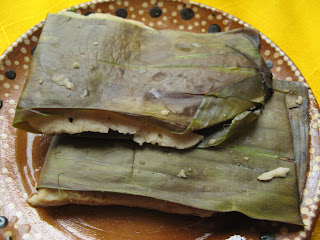 I wanted to compare the Frito de Puerco with that I'd had at Fonda Marceva. In either case, it's a lusty sort of dish of fried pieces of pork, some with bone, in a picante, brick-red sauce. This was better than anything else I tried, yet the version served at Fonda Marceva had more complexity, and above all, less grease. The accompanying rice was dreadful, mushy and overcooked. I think it was a reheated leftover. The frijoles were just "o.k.".

We were served one large pretty good tortilla each with our meal. That sounds meagre, but it was really quite enough, although we were offered more, late in the meal.

Afterwards, Tere and Peter shared a small portion of flan that looked pretty good. I had a cafe de olla that was richly brewed. It was a a good dessert.

Our earnest and sincere waitress did a good job, but her service was unpolished.

Here's the score, from my point of view.

Would I go again? Maybe, to try the Mole de Olla, (weekends only), the uchepos, and a few other items.

There's also a mariscos menu, something I would not be tempted to order, and a breakfasty menu of chlaquiles, huevos and the usual.


Live Music Advisory: there was a small group preparing to perform as we were leaving at around 3:00 p.m. 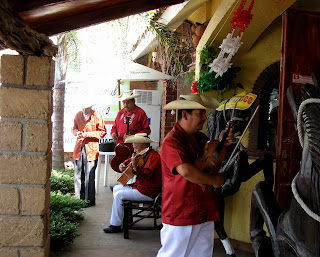 A forum discussion of Restaurante Caracuaro can be found here.
Posted by Don Cuevas at 4:27 AM

Live music! There's a deal-breaker. But thanks for the rundown, great as ever. I've never noticed that place even though I've driven by countless times.

Felipe,
Our Live Music Advisorys are yet another service of Don Cuevas Productions that benefit you, our followers.

But there are few places where you can eat that don't have live music at some hours. I suppose you could go to VIP's Sanborn's, El Portón, or even Restaurante California and not have to face the music. Of course, there's Sirloin Stockade, which is always attractive.

I think the key to avoiding the live entertainment is to arrive early, dine and leave before 3:00 p.m.

Just FYI: chavindecas are a traditional antojito in Apatzingán. They are unrelated to the chivichanga. The cheese on the corundas is queso fresco, not Cotija. Uchepos can be either salados or dulces, depending on who is making them. The corundas wrapped in hoja de plátano are typical of some parts of the Tierra Caliente.

And the name "Tere" does not take an accent over the first 'e'.

(I usually don't publish anonymous posts, but your was so insightful, I made an exception. Adding at least a nickname would be an even more generous gesture.)

Will we see you here again? With a nickname?

I have corrected the spelling of "Tere". Gracias, Anonymous.

The cheese on the chavindecas was, indeed, queso fresco. That on the uchepos was probably also queso fresco, but I didn't taste them or get details from our compañeros seated across from us, so I can't say for sure.

There was no cheese on the corundas. Nothing would have helped them be palatable.

There is, of course, no relation between a chavindeca and a chivichanga, other than both are made from tortillas, both contain meat or chicken, can be garnished with lettuce, onion tomato and avocado and enriched with sour cream or crema.

I can only conclude that I was imagining a distant connection between them.

Also, the chavindeca's two tortillas are briefly fried, composed and stacked; while the chivichanga is typically a flour tortilla, rolled around the filling (a "burrito") and deep fried.

So you are correct. There's no relation between the two. Now I think that a chavindeca more resembles a tostada compuesta, as served in Arizonan Mexican restaurantes. Just less crispy.
Example: http://tinyurl.com/67ohour