A few years ago, in a New York Times article on "36 Hours In Mexico City", the writers noted Fonda La Veracruzana as serving Peruvian cuisine. How they got that bit of information is a mystery. Could it be that the writers or perhaps rewriters thought that the ceviches on the menu were Peruvian? were any of them actually there? Lo siento, NY Times, pero no ganas el puro. Fonda La Veracruzana is solidly umm, ah Veracruzana" in style. There's something fishy here.


We'd spotted this cute little fonda on one of our many walks through the area. It's close to the back of Sears Insurgentes and the attached Sanborn's, and about 3 blocks from Mikasa Asian supermarket on Calle San Luis Potosí.

I'd also read a glowing review on Nick Gilman's Good Food In Mexico City blog. Please read his description of the many wonderful dishes offered. But it wasn't until last week that we finally dined there, not once, but twice. Although other local marisquerías have their merits, particularly La Embajada Jarocha and Marisquería La Morenita del Mercado Medellín (neither very far away from La Veracruzana), we were really impressed by most of what we ate at La Veracruzana. I'll describe a few highlights.

We also loved the comfortably informal atmosphere, especially in the sunny back patio dining room, where large mirrors on the walls allow you to bask in your good luck in being there.

Jaime, our gentle mannered waiter brought us a basket of decent bread and Caldo de Camarón on the house. Sra. Cuevas looked over the three menus del día, each with optional variations, and decided on the number 1 menú, which started with either Arroz con Plátanos Machos Fritos or a bowl of Caldo de Camarón. The caldo was just right, a shrimpy broth with vegetables but no visible shrimp, and neither too salty nor picante.

Her main course was a large Filete de Mero Empapelado en Hoja Santa. It was perfectly cooked within its foil envelope, along with tomato, onion and a large leaf of hoja santa, which lent its delicate anise flavor.

Doña Cuevas and I were goggle-eyed at two gentlemen at the table behind us, slowly dissecting gigantic whole shrimp hanging over a sundae glass of pinkish sauce. We asked Jaime about the shrimp. They were Camarones Gigantes Para Pelar, and I knew I had to have some. There are 15 of these monster crustaceans per order, at a reasonable $180 pesos. But after a rare pause for rational thought, I asked Jaime if the same shrimp could be prepared in other ways, say, Al Mojo de Ajo.

"¡Claro que sí, Señor!" "Certainly. Look, here on the menu,  Camarones al Mojo. But you get only eight shrimp."

That sounded fine to me. It was a very good decision, for when the platter of split, cleaned, garlicky fried monsters arrived, heads and tails intact, the dining room was suffused with the aroma of shrimp and toasty garlic slivers. I'll just say that those were the best Camarones Al Mojo I'd ever eaten anywhere. So good that I was crunchy the crispy swimmerets and sucking out the heads. 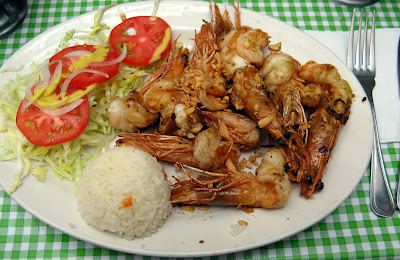 We were so pleased that after dinner, I requested a menu to take with me and they gave me a full, 4 or 5 page, bound menu. I have it around here somewhere.

We returned on the following Saturday with our friend, Ron. Ron would put La Veracruzana to the test of his exacting standards, far more exigent than ours.

This time, we immediately ordered the 15 count Camarones Para Pelar. They were truly impressive to see, and Sra. C. and I both enjoyed them. Ron told us that they were from the Gulf of Mexico, as he could taste the iodine in them. (I thought that was how shrimp taste.) At least they were authentically sourced, Veracruz being a port on the gulf. I admit that their texture was disappointingly soft and a bit mealy, probably from overcooking. I wasn't much impressed with the creamy pink sauce in the sundae glass. It seemed to be a thin Russian dressing. Better was a red, sharp cocktail sauce in a dish. It even had horseradish in it! There was also a weedy looking but tangy bottled Salsa Bruja, a spice and herb infused vinegar that went very well with the shrimp.

We moved on to platos fuertes, main courses. We decided two were enough. I guide Doña Cuevas to a Lomo de Marlín al Acuyo (more hoja santa) y Cacahuates. That was a mistake.

We also ordered a Filete Tlacotlalpan, in which the fish, shrimp and octopus chunks in a dark sauce are enveloped in a banana leaf and steamed. Better than then marlin, which was overcooked and had a sweetish, tomatoey sauce.

We closed our comida with an Anís Seco Chinchón except that I was brought anís dulce, and mineral water. Ron has a Sambuca Negra, which seems to be Sambuca plus Kahlúa. I had a sip. It was delicious.


Ambience: Casual, relaxed, mirrored, música Jarocha not too loud. Loved the back patio dining room with its mirrors.

Suggestion: If you go during the week, check the menues del día as they are very good deals. On our first, Wednesday visit, there were three separate menues, from $80 to $110 pesos.

Would we return: Definitely, YES!

Nice rundown. You make me want to go there.

Haven't been to DF in a dozen years, maybes time to hop the ETN for some decent food while draining the wallet.. nice summary, keep it up!