The Pie In The Sky Guy

Thanksgiving is coming soon, and a recent topic on pumpkin pies on our local Yahoo mailing list evoked some memories for me.

It was November, 2005, and we had only recently arrived in the Pátzcuaro area. We had heard good things about Cha Cha Cha, a beautiful restaurant of eclectic international and Mexican cuisine. (It closed a few years ago, and the space is now occupied by the more traditionally Mexican Restaurante Lupita's).

"Cx3" was owned by Rick, a Californian and Enrique, his Mexican partner. Rick decided to make a Thanksgiving buffet dinner for the expat colony and friends. This grand and highly appreciated  gesture would entail a lot of work. I went to him and introduced myself as a retired baker, and volunteered to make pies for the dinner. I also made potato rolls, but those I could do at home.

Rick showed me around. I was especially interested in the "back" kitchen, where there were two vintage gas fired ovens from Mexican Army surplus, circa La Revolucion. These ovens had narrow chambers, with no racks to lift products above the floor, and no way to regulate the temperature, other than by eyeball and "feel". The pies were to be elevated off the oven floor by placing two, inverted cazuelas de barro inside. Rick introduced me to his assistant, young Rubén, who would be my helper.

I arrived at Cx3 late Wednesday morning, and we set to work.
Rick had scored several kilos of "Real pumpkin!" in chunk form in Morelia. They were irregular in size and shape. I decided that the best way to cook them would be by simmering them on the stove top. This took several rounds of cooking as we couldn't do them all at once.

This all had to be well drained or the filling would be watery.

Next step was to scrape the cooked flesh from the husk and puree it in a somewhat undersized food processor. The puree had to be drained so that the pie filling wouldn't be watery.

The blending of eggs, milk, spices and sweetener was the easiest part.

On to the crusts. These proved to be truly daunting, as the only available shortening then available in Pátzcuaro Centro was Inca, a solid and durable shortening. It is so tough that you have to hack off pieces with a heavy knife. This proved difficult to blend with flour and to form crusts. Several trips to the Super Lloreda store nearby were necessary to get more Inca and harina.

Somehow, I managed to patch together enough dough to form ragged crusts. These were filled with the rich, amber, sweetly spiced filling, and placed, one at a time in the pre-Revolutionary ovens. I couldn't do it. The oven opening was too narrow to pass with quivering uncooked pie in trembling hands without receiving painful burns. But Rubén was able to do it. Checking for doneness was infrequent, due to the hazards of passing objects in and out.

I think we had made 6 to 8 pies, some supplemented with carrot puree to enrich the pale Mexican pumpkin flesh, and a couple of payes de mamey, a rich and easy to work with tropical fruit. I think that there also were some payes de camote (sweet potato, sort of). This process took many hours, due to the above mentioned limitations. It gave "over reaching" new depth of meaning.

I left the finishing up to Rubén, and went home with  "huesos molidos". I was wiped out.

Next day, Thanksgiving Day, the expats gathered, with high anticipation at the restaurant for a taste of home. The buffet was attractive and varied, the turkey, dressing, and the traditional fixings all succulent and delicious. Seconds were offered. The meal was a real crowd pleaser. I think that the cost was $150 pesos, a true bargain.

The pies were portioned and served by staff. They were received and eaten to acclaim. Only Rick, Rubén and I knew the arduous labors involved in their making.

For this event the next year, I made the pies at home. It still was hard work, but it was much easier. I didn't miss those hornos Revolucionarios a bit.

The Thanksgiving Dinner, 2006 at Cx3 was even better than the previous, but served at table. Rick sensibly raised the price and it was still worth every centavo.

Yours truly, Don Cuevas, pictured  below, smoking his then favorite puro, after another special occasion meal at Cha Cha Cha.

As a special treat, I'm going to share my favorite (sweet and spicy) pumpkin pie filling recipe. It's from The Vegetarian Epicure, Book Two, by Anna Thomas. 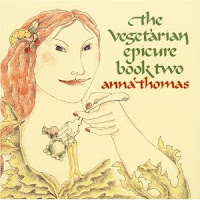 In a bowl, combine the two sugars, molasses, salt, spices and pureéd pumpkin. In another bowl, beat the eggs with the milk and rum. Combine the two mixtures and mix them thoroughly.

Sprinkle the chopped crystallized ginger evenly across the bottoms of the pastry shells. Ladle the filling carefully over the ginger, dividing it evenly between the two shells.

Bake the pies in the preheated 400º oven for 35 to 40 minutes, or until a knife inserted near the center comes out clean.

Cool the pies on a rack and serve with sweetened whipped cream.

Great story Sr Cuevas, I feel for your labor, people NOB would have a hard time understanding the trouble you went through, when all they do is open a can, and roll out the unthawed pie shells.
Are you making them this year? I'm ready for a taste!

Tancho, I'll be making some pies for a private dinner.

You're truly a dedicated baker. I think I would've run screaming into the afternoon air. BTW, next time, zap the pumpkin pieces in the pressure cooker.

Ah. The joy of slow food in Mexico.

I will be making a few pies for a private dinner to which we have been invited.

I will also bring a few other foods.

I recently read two books by Nora Ephron, "I Remember Nothing" and "I Feel Bad About My Neck". "I Feel Bad About My Neck" was donated to the Stone County Library by Wanda West. In one of the books, Nora was stating several thruths she had learned in life. I had to disagree with her on this one, "Do not bother with homemade pie crust, it is not worth the effort." There is nothing in the frozen food section that can compare with the crispy, flakey, faintly salty flavor of a homemade crust. I appreciate anyone who takes the extra 15 minutes to make something so simple, so special.

Great recipe, i've got to try it with the rum, sounds delish. Past few years I've been preparing my turkey day pie here in Morelia with carrots not pumpkin believe it or not, with the right spices the taste is uncanny.

Don Cuevas I've ended up here several times but never had the chance to say: Your blog is a great read! Keep it up.

Thanks for stopping in, Izzy,. And thanks for the compliment.
Yes, carrots make a fairly good pumpkin substitute. Ever made a mamey pie, or chiocsapote? A good, ripe mamey is a wonder fruit.
Saludos,

I had a medium-large pumpkin which I "sacrificed" two nights ago. I cut it into manageable sections, then steamed half in a tamal steamer; the other halve in a pressure cooker. I liked the results from the tamales steamer better.

What a smart idea to add carrot puree!!

You seriously make me miss mexican food so much! I need to go to mexican restaurants more often. Thanks for sharing this information. I really appreciate it!