One of the enjoyable things about staying in Zihuatanejo's mercado district is the abundance of inexpensive eating places. We barely sampled these but bookmarked the untried places for future visits. I did eat twice at Taquería El Güero, a mere block from our hotel, on Calle Los Mangos, between Calle Tamarindos and Calle Las Palmas. 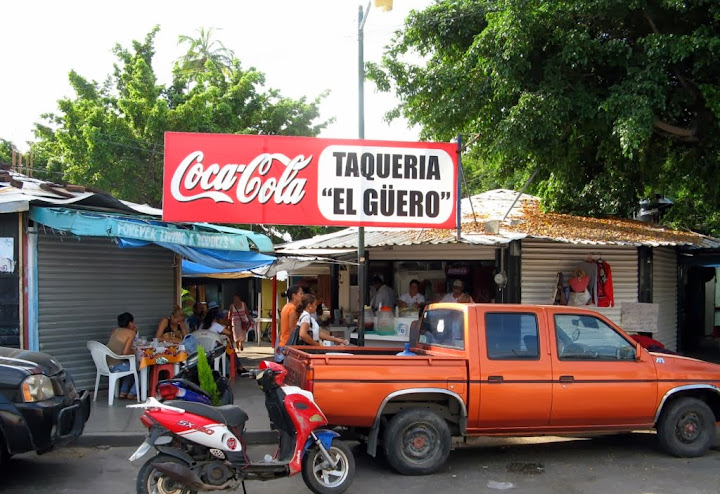 El Güero is noted for tacos de cabeza, and offers a wide choice of parts for your delectation. I thought the lengua and the cachete were pretty good, but I passed up a chance for some tacos de ojo* or of trompa. (muzzle).

*Taco de ojo has a secondary meaning, one not used here.

The tacos are a little expensive, at $10 pesos each, but you can also get some free or almost free consomé. The aguas frescas are just o.k., but the outstanding attraction is the friendly staff. On my second visit, I was given a nice calendar. 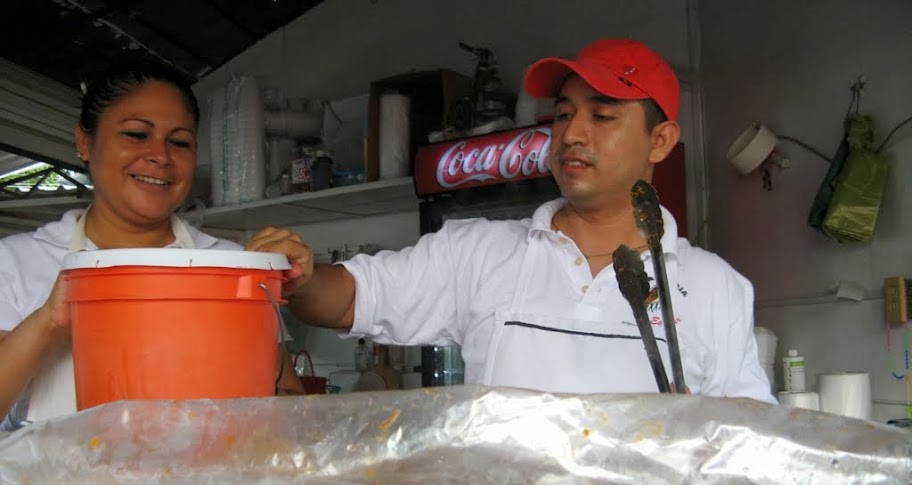 I have to say that the accompanying thick salsa picante de aguacate y chile is the most unattractive salsa I have ever seen, but it tastes good and is definitely picante.

The tacos are decent, although I found it difficult to tell one type from another. 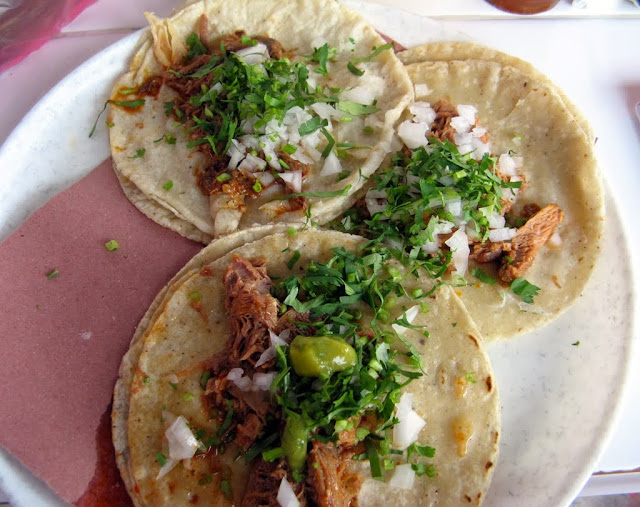 Taquería El Güero
Food: ***
Service: ****
Price: $ Bargain! A light meal for about $40 pesos.
Hygiene: Looks good, but I passed up the ice for my agua fresca de naranja, when I had the chance.

Directly behind El Güero is Fonda Miriam, offering a $40 peso comida corrida, but I never got around to trying it.

Speaking of comida corrida, has anyone tried Fonda La Costeña, next to Doña Licha's on Calle Cocos? It might be an overlooked treasure!

Further into the mercado, I found a pair of fondas, one crowded with customers, the one across the aisle nearly empty, with access to the street on one side. I didn't get a chance to eat at either, but I did listen to an old man play a plastic toy bugle and sing in a good voice.

I'd made the mistake of being attracted to slick surroundings when we ate at Fondas Valencia, reported on earlier. We went one evening to an even slicker operation, to Ruben's Hamburgers, a fairly new restaurant that had not been there last year. It's close to Villas Naomi. We had a recommendation from a friend, who had not eaten there herself, but who had a glowing recommendation from another friend.

It's slick, it's flashy, it's over the top, and in my opinion, doesn't belong in the quiet ambiance of Colonia La Madera. The menu is ambitious. 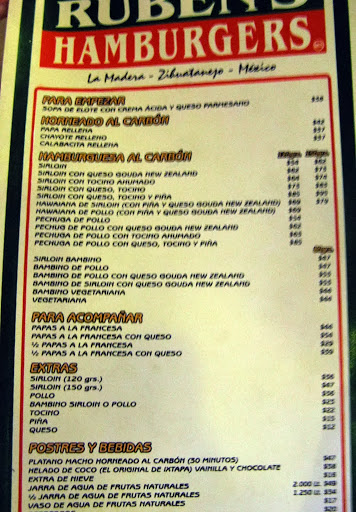 Our meal could have been more enjoyable if the pace of service had not been so rushed, in which everything we ordered came to our table almost at the same time. We decided to try the Sopa de Elote, first thing featured on the menu. It was unattractive, but tasted all right. But in the end, it's skippable. 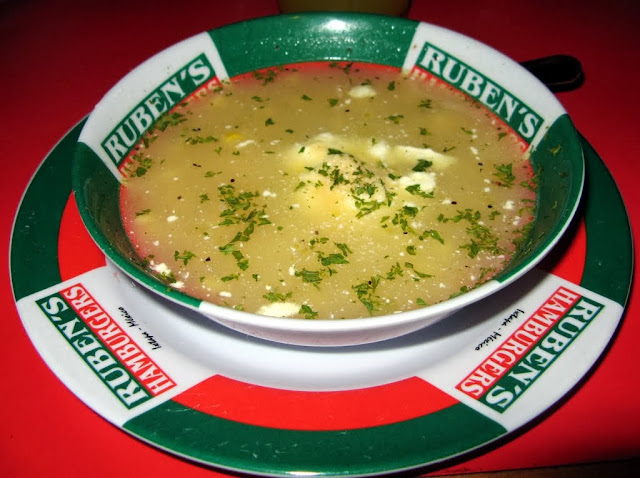 A real highlight of the meal were the complimentary pickled vegetables. The huge head of pickled garlic was especially magnificent. 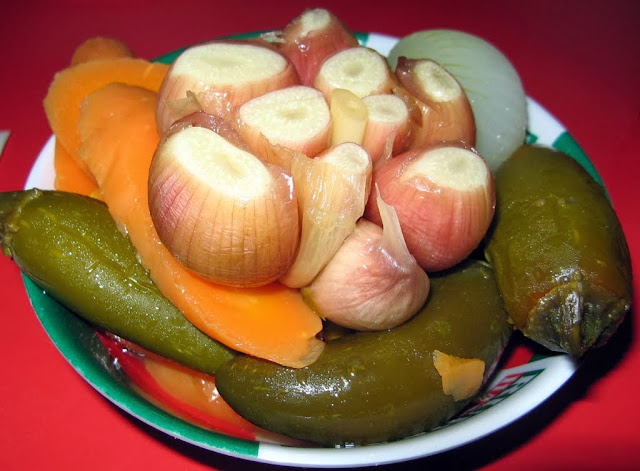 We were overcome by our own greed, and of the two weights of hamburgers, we chose the 150 gram ones over the 120 grams. The hamburgers, and an order of shoestring french fries (which arrived almost instantly with our soup) were not bad, especially if you like your burgers to be bases for stacks of condiments. I this case, there was caramelized onion, lettuce, I think tomato, coleslaw and Gouda Cheese from New Zealand.

Although I didn't order it myself, both burgers came with a large side of bacon. The bacon was uniformly cooked and crisp, (not bad if you wanted it) and was the killer, finishing touch to the overloaded burger. It didn't taste bad, but I prefer a simpler burger, where the quality of the "100% Sonora Sirloin" beef could have been fully appreciated.


Let's step away now for a moment from the pleasures of eating to other pleasures; a massage. This one was at Paty's Mar y Mar Restaurant (the name is spelled in numerous variations.) and Yoga Studio, on Playa La Ropa. I had a 50 minute tejido profundo (deep tissue) massage, and I will only say that everything was just right: the setting, on a terrace overlooking the beach, Estela, the masajista's hands were expert; and the price was only $300 pesos. Massages are available by appointment. Yoga studio web site here.

Just to prove we were there, here's a photo of the beach.


We made another visit to the Gringo Gourmet Gulch of Calle Adelita in Colonia La Madera. It's obligatory for us to dine at least once each visit at Rufo's Grill. The place was in fine form, and Rufo was there, greeting guests, waiting tables, and running the grill. The charm of Rufo's is that it's always predictably simple and delicious. We had grilled chicken breast, accompanied by the expected grilled vegetables, and grilled shrimp.

A guitarist/keyboard player lulled the guests into a state of blissful somnolence with lethargic renderings of '60s top hits, including "Honey" (I miss you). Nothing startling or jarring here.

In our next episode, return with us to the thrilling days of yesteryear. A remembrance of things past comes back to life in the form of a pizza.

I remember Ruben's Hamburgers when it started in a small way in Zihuatanejo in the Playa Madera neighbourhood some time in the 1990s, It then moved to Ixtapa to a much larger building. The Ixtapa Ruben's is still open and seems to be doing well. I very much enjoy your blog!!

And you didn't eat at Paty's? That's a great place to eat and while away the afternoon.


The same Ruben's opened a branch in Morelia around 2005 on Garcia de Leon where Hortelano used to be and which is now occupied by Rincones de MIchoacan. Needless to say, it's no longer in Morelia.

"...has anyone tried Fonda La Costeña, next to Doña Licha's on Calle Cocos?"


This must be the place we walk by, almost abandoned, every time we head to Doña Licha's.

I was at Paty's for the massage. Sra. Cuevas did get a fruit plate and a carafe of coffee. After the massage, I had a good but tiny 3-gulp limonada.

It did look like a nice place, but of course, the prices were somewhat elevated compared with those in town. It's the beach, you know.


I am not good at sitting and whiling away the afternoon, or morning, for that matter.

I remember searching for Ruben's on García de León in our early days in Michoacán and not finding it. We ended up at the Pioneros Hamburgers (not tacos) also on G de León, which was simply dreadful. I would take a Ruben's burger any day over Pioneros' slice of meatloaf like substance, with bad ketchup al gusto, like pink, tomato flavored goo.

Who knows what wonderful food they might have.? But the gravitational attraction of Licha's is nearly irresistible.


La Costeña must bed doing something right and have a customer base, as it has survived this long.

"they will do of your dinner the whole agreeable satisfaction."

"you will be able to enjoy your dinner in a hot environment accompanied of a special touch."


Yep, a hot environment sounds satisfying. Plus, I'm thinking about those saucers in the embers.

Thanks for bring that to our attention. I was going to reproduce it on the blog, but I'm too diplomatic to have done so. :-)

I never let diplomacy stand in the way of a good chuckle.


You gotta wonder why people who seem intelligent generally conclude that moving from one language to another is just a matter of opening a dictionary and substituting words. We both know that never works.