Around The World In Three Days (in Mexico City) 3

It had been scarcely 3 weeks since we had eaten dim sum at Chef Jon's in Whippany, NJ. But there we were, hurtling along in a taxi on Viaducto in Mexico City, to our destination in Colonia Viaducto Piedad, to the latest dim sum magnet for dim sum mad foodies.

Mexico, and even Mexico City, has not been known for good, authentic Chinese restaurants. Our previous favorite so far was Mojing, in Centro, where we ate twice before. But Mexico Cooks! wrote that the restaurant had again changed hands and the food was now dreadful (I'm paraphrasing here.)

I think first read of Jing Teng on Nick Gilman's Good Food In Mexico City blog. There was a glowing review recently on Mexico Cooks!. I think that David Lida, who was a pioneer in el DF in finding the nearby Ka Won Seng Chinese restaurant, may have also mentioned Jing Teng. We are but happy followers of these pioneering bloggers.

On arrival, we stepped inside to a surprising scene. The joint was jammed. Even more surprising, there at the second table inside was Mexico Cooks!, her wife and a friend.  Hurried greetings were exchanged, and we hastened to the dim sum steamer bar.

We'd read that the dim sum was served from bamboo steamers on a centrally located steam table. The young and cheerful waitress, the only Spanish speaking staff member, helped us select choice morsels. The dim sum are served by the steamer tray. It's a real adventure, because we were not always sure of what were were getting. But I did recognize and asked for Hau Kau (steamed shrimp dumplings), Pork and Sweet Potato (?) dumplings, and Steamed Buns with Pork filling.

The scene was hectic, swirling with customers and staff, but we did all right for the most part. Sra. Cuevas selected a steamer tray with two large "tamales" filled with glutinous rice, chicken (?) and other morsels, wrapped in lotus leaves. I found these to be too heavy and too much.


We were asked permission whether two newcomers could sit at our table. We were but three, and the table was made for six. Of course!

The newcomers were Españoles living in Mexico City for many years, and our conversation covered many topics. We shared dim sum. One item was a Steamed Butter Bun, which I did not like at all. It has a bright, egg yolk colored, slightly runny filling, and far to much artificial vanilla. But no matter, there were far more items from which to choose. I regret that I didn't get to the tripe, prepared in at least two ways.

Our Spanish companions ordered a large, family size bowl of congee (rice gruel, a distant cousin to atole, but far more interesting, in my opinion.) The congee had bits of pork, perhaps chicken, egg drops and shrimp. It also had rice vermicelli, something I'd never seen nor heard of before. Our Spanish companions gave me a small bowlful. I could have eaten more. It's on my list for my next visit.

Another odd item were steamed buns of a particularly silicon like texture, with a purple spiral that swirled through the entire bun. The Mexican waitress told us that they were camote buns, although Mexico Cooks! told us that they were really zarzamora. The filling was a starchy, lightly violet color. Could it have been taro?

We ordered a vegetable dish with the help of the Spanish speaking waitress. It was long, green and coarse, in a light, soy sauce broth. It was somewhat disappointing; not much flavor, and stringy. 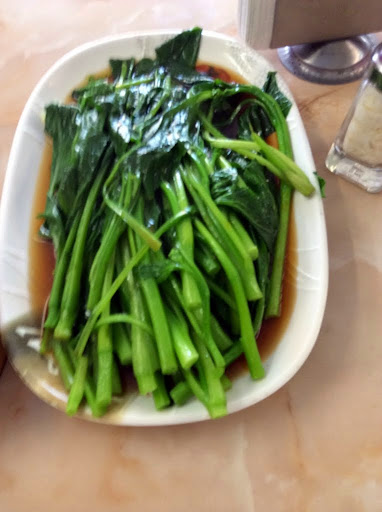 Unfortunately, we had chosen our dim sum in haste, so we were filled before we could fully satisfy our dim sum madness. ¡Lástima! There was no room left for dan tot, or tiny custard tarts, nor other desserts. 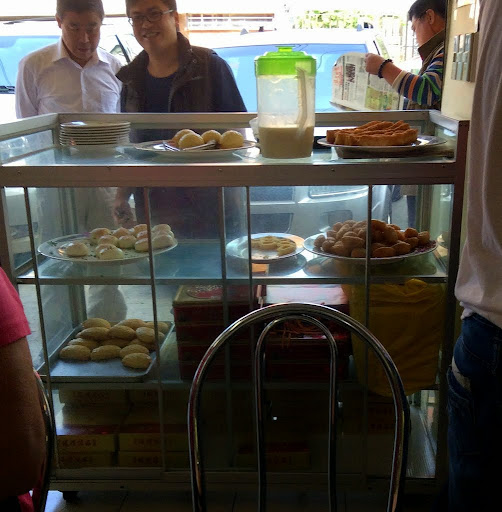 We asked for the check, and the total was pleasant. This interestingly varied and delicious meal for three cost only $375 pesos. The tea was free.

Service: *** The cheerful waitress keeps up as best she can, but expect to participate in your own service.

Ambience: It's as if they moved in and put in some tables and chairs, but forgot to hire a restaurant dining room designer. Just deal with it.