Last Sunday, we met our old friends and former neighbors, Geni and Larry, for a meal at Mariscos La Güera in Pátzcuaro. It was a meal that revalidates my love affair with this restaurant.

Now, some other friends may have misinterpreted my opinion of La Güera as my favorite Pátzcuaro restaurant that it's perfect. It is not. The menu is extensive, and some dishes don't work for me, but I have found those that do. On the other hand, the service, although informal and friendly, has had very few lapses over the years. We are very fond of the staff.

Over all, the most reliable dishes are the simpler, less elaborate ones. Of the handful that I disliked, these few slink through the Hall of Shame.

1. Crema de Camarones, an insipid and boring soup with no visible shrimp.

3. Paella. Not really bad, just under seasoned and boring after a few mouthfuls. Worse, it has sections of hot dogs in it.

5. Caldo de Huachinango. Not much flavor, but worse, far too many tiny bones to deal with. So, I should have known better.

¡¡Los Buenos!!
Tip: most shrimp dishes are worth getting.

1. Camarones para Pelar. Hard to beat this dish if you want pure, sweet freshly cooked shrimp. Portions are generous. The large size is sufficient to take home for a light meal or the base of a new dish.

2. Camarones Empanizados. Breaded fried shrimp. Among the best we've had.

4. Brocheta de Camarones: shrimp, bacon, sweet peppers and onion broiled on skewers; another fave of Doña Cuevas. Less so for me, as the broiling can sometimes overcook the shrimp on the skewer.

5. Caldo de Camarones: Mildly picante broth loaded with U-Peel-Um Shrimp. My wife almost invariably orders this. A grande is too large. Comes with a dish of attractive garnishes. A friend of ours shuns this dish because of her sensitivity to MSG, which she is sure is in the broth. Could be.

6. Ensalada de Mariscos. I like to order this medley of cooked and raw seafood from time to time. The presentation has varied from "oh, nice ..." to a small work of art. I have them omit the raw oysters, but I will eat the patas de mulas molluscs.

7. Ancas de Rana (frogs' legs): 4 out of five times nicely cooked. Once they were overcooked, dry and shriveled but more often, moist and tender. Nice for an occasional change.

Drinks: There's always cerveza. Several brands are available. The limonada is good, especially when made with agua mineral. Just be sure to stir well or risk a dose of sugar syrup at the end of the drink.. My usual drink is a beautiful michelada* con Clamato, serve in a salt and chile rimmed glass mug (formerly in a balloon like "chavela".) You can get you michelada made to your specs.

* In its simplest form, beer over ice with lime juice, in a salt rimmed goblet or mug.

Check out the aguas frescas del día. There are some nice flavors depending on the day. I have enjoyed melón and sandía.

On Sunday, our friends both ordered cocteles de camarones; Sra. Cuevas a tostada de marlin ahumado. (These have varied from very good, spicy, warm smoked marlin on a crisp tostada to a watery, cold, soggy one. She is still a loyal fan.)

On Sunday, I saw a new tostada on the list: de Filete al Ajillo. This was a really first rate item, with tender cubes of white fleshed fish in a tangy sauce containing soy sauce and a touch of chile guajillo. Best new item I've tried in many years.

Our friends then both had mojarra. I'm not sure if it was simply cooked dorada (fried) or al Mojo.


Sr. Cuevas had part of an enormous bowl of Caldo de Camarón.

I had a Filete Mediano de Salmón a la Plancha. It was perfectly cooked.

We also had better than usual bread, the usual tostada crisps and saltines, and a creamy, light green, garlicky salsa.

I'll wrap this up with

Ambience: Denizens of the deep line the walls.

Hours: approximately noon to 6, every day.

Website: Mariscos La Güera
(A few years ago, the owners changed the name of at least the Campestre branch to Mariscos La Wera. I guess the odd looking spelling better reflects the local pronunciation. You can take your pick.)
The address given, and the Google Map location is way wrong.

I must add: much credit goes to the gracious, hard working family that owns and runs Mariscos La Güera, among whom the most visible are Sra. Irma Judith Melgoza and her husband, Sr. Felipe Corral Tovar.

Here they are in a moment of diversion and relaxation. 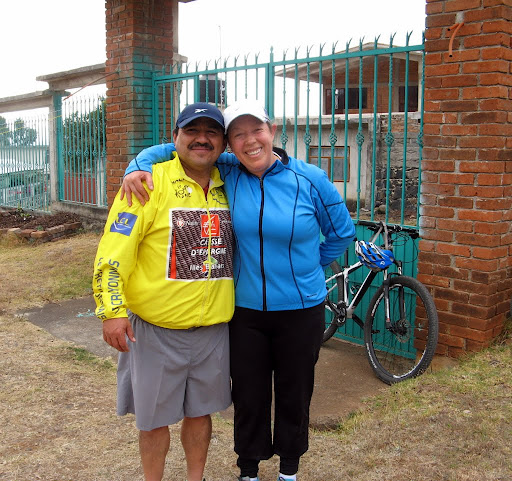 The frog legs are my favorite, followed by the whole fish. I'm looking forward to trying the tostada de filete on my next visit. Your ratings are right on the mark. Mariscos La Güera is definitely one of Patzcuaro's jewels. I only wish they'd open a branch in Morelia.

Coctele de camarones (with the right mix of ingredients), is a favorite of mine, especially in Mexico, and I don't mind if it's mixed with other fish of my likeing. Camarones anything really, unless I have to peel TOO many, especially if they are in a sauce. The exception may be "caldo de camarones" so much tastier cooked with the shells on.


All those dishes look lovely.

Thank you. Most of the photos are from my vast collection.

My feeling for the place is less excitement than sustained, familiar satisfaction.

DC: The link to the Mariscos La Güera website is broken. (And there are a couple of typos I could mention, off line, if you're interested.)

Mike, what is the difference between this location and the one out on the highway to Morelia? I have eaten there, and overall I would say the quality of the end product was a 5 to 8, depending on the dish. There were 4 of us and we put together a large platter of 4 shrimp entrees and a separate dish of paella. We each had a coctel de camerones. All of the shrimp were beautifully fresh, and of fairly good flavor and quality. Truly good margaritas that reminded me of the marvelous "knock your socks off" margaritas at El Set in Puerto Vallarta.

The Pátzcuaro Centro location is the matriz, or main restaurant. The Campestre unit, on the Morelia highway, at Colonia Nueva, is convenient for us when we are returning from a visit to Morelia and hunger comes. But overall, I prefer the Pátzcuaro Mariscos La Güera. It's cozier and the service seems more attentive. The Campestre space is just too large for me to feel at ease.

Recently, part of the Campestre restaurant was either sold or leased to a different restaurant, Los Cocuchos. We haven't eaten there, and to be truthful, we don't have any desire to do so at this point.

PS: the paella is not BAD, but having tried it twice, I wouldn't order it again.

Thanks for the feedback. We shall have to try the Patzcuaro location soon.