After our August, 2014 visit to Jing Teng, we craved an encore. This time we caught an inexpensive taxi in Colonia Roma, and, thanks to our street savvy veteran taxista, we were at the restaurant about 10 minutes later. 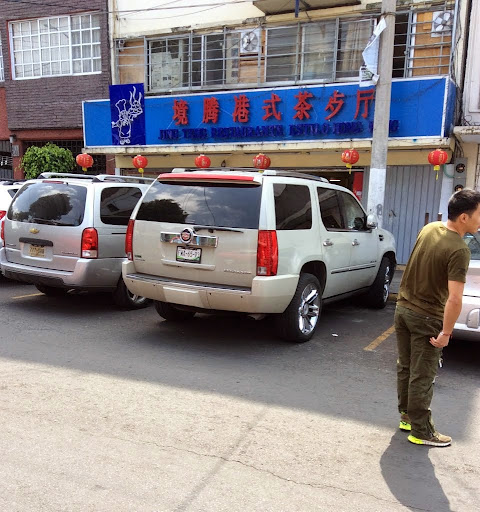 As my physical well being had improved greatly since our August visit, and because the restaurant was very quiet, we were able to look over the dim sum offerings with calm deliberation. Additionally, there were only one or two tables occupied during the time we were there, 11:00 to 12:30 a.m. Our charming, Spanish speaking waitress, Ximena, was able to give us her full and helpful attention.

We immediately noticed that the glass case in the window held some intriguing Cantonese meat and poultry specialties.

We shared a steamer of three Char Siu Bao. O.k., but not the best we've ever had. The filling seemed to be mostly a few fatty morsels of pork and very little sauce. The puffy white dough was slightly undercooked and too filling to make them worthwhile to me.

Afterwards, we nibbled on some pork riblets with garlic. The garlic was understated.

We saw an employee get what they told us was "canelón". But of course, it really has a Cantonese name which we don't know. It seemed to be like  a rice flour crepe, but in an unusual form, like twisted pasta strands. It was rich, with a glutinous texture. We like stuff like this.

We'd seen the roasted duck, a white cut chicken and some lengths of Chinese bacon hanging in the window showcase. We asked Ximena about the bacon. She told us it was served sliced and coated with "miel". We had to try this, and we were well rewarded.

This stuff is beyond good, and could be addictive. It was probably the costliest item we had that day. $70 MXP.

We ate only half of the bacon, reserving the rest for a later meal, while saving room for a "small" bowl of congee. Ximena offered us different optional additions, such as beef, egg, shrimp, duck egg. We chose the latter.

This is the small sized congee.

The creamy rice gruel is Chinese comfort food. There was a hint of fresh ginger and the oddly textured "zucchini" slices turned out to be preserved duck egg. ("1000 year Egg")

I also saw that there are two shelves to the side of the dining room with items for retail sale. I bought a pound package of Lop Cheung, cured Chinese pork sausages. $100 MXP. It may be slightly cheaper at El Dragón del Oro, at Plaza San Juan and Calle Pugibet, in Centro. But it was worth the small price difference for the convenience.

Jing Teng remains on my "A" list for Chinese food in México.


View Larger Map
Posted by Don Cuevas at 7:15 AM

I am adding it to mu list for my next trip east. Did you get to the Korean restaurant I recommended? Or did you recommend it to me? Age plays its tricks. I seem to recall you posted a review.

We never got to the Korean restaurant, although I did see a couple along the Zona Rosa side of Av, Chapultepec, including the well recommended NADEFO. http://www.sinmantel.mx/nadefo/