I first learned of Restaurant La Coronita in a small, useful book, "Oaxaca Tips". While only a few blocks west of the Zócalo, it was said to be "off the tourist track". It's a stronghold of culinary tradition, and one of the few, perhaps the only Oaxaca restaurant offering all of the famed Siete Moles every day. I also looked it up on TripAdvisor, where many reviewers lauded its cooking, but one dish, a soup, stood out: Sopa de Guias. La Coronita was on my must visit list.

We went there for the first time on Saturday, January 17, 2015. It's located in the venerable and somewhat sober looking Hotel Valle de Oaxaca.

The restaurant, "La Coronita", is on the ground floor, and the capacious dining room presents a restrained but attractive decor.

There is a short list of well chosen mezcals. On both visits, we had the decent mezcal joven blanco de la casa. $30 pesos.

We started with a light appetizer, blanditas con mole, which are simple medium sized tortillas spread with a choice of three moles. They were pretty good, but are skippable.

Of course, we had to have the famous Sopa de Guias. It is a meatless soup consisting of a well balanced broth laden with fresh, green squash leaves and runners. The added plus is the pair of chochoyones (or chochoyotes), a sort of Oaxacan maTsaH ball. They are small, mild and delightful. Sopa de Guias is light and fresh and feels like a very healthy, low fat soup.

Doña Cuevas had Crema de Elote for her soup. It was smooth, slightly sweet, with a balanced richness, and a true comfort food. I tasted a spoonful, and it seemed almost to have a hint of vanilla.

We then looked over the menu of Especialidades. I was immediately attracted to the Chichilo,  a mole rarely found on restaurant menus. A key ingredient of this black mole is ash of burnt chiles. (This may be the most exotic dish I had on this trip.)

"Mole Chichilo starts with a rich beef stock. The seeds from the chile De Arbol (very hot), Chile Ancho (mild), and Chile Guajillo (hot) are removed and toasted, as well as the skins of the chiles ( this should be done outdoors). After the seeds are toasted they are placed on top of a corn tortilla which is then toasted on the comal, until almost black but not burned. The toasted tortilla is then ground, along with the seeds. The chile skins are soaked until soft. They are then placed in a blender or hand ground in molcajete (mo-ka-het-tay - a stone three-Iegged mortar and pestle) Avocado leaves are toasted and ground with cumin seeds, garlic, fresh oregano, allspice, tomatoes, tomatillos,chayote and potatoes. The entire mixture is thinned with the beef stock to a little thinner than desired thickness, and reduced to thicken. In most cases the mixture is fried, in a little oil for a fast reduction imparting a different flavor."

I had a choice of chicken, beef or pork and I chose the latter. It was a little resistant to the spoon and somewhat stringy. The mole itself was interesting and good, but it will not become my favorite. One reason is a slightly slick unctuousness from whatever was used to thicken it.

La  Señora was satisfied with the blandita and soup and did not order a plato fuerte.

We returned to La Coronita on Tuesday, January 20, this time with our local friend, Bixaorellana.

We skipped the appetizers, but all of us had Sopa de Guias. I neglected to mention earlier that the soup is accompanied by a small dish of a condiment paste, chintextle, of chile, garlic and possibly dried shrimp.

The chintextle at La Coronita is especially smooth and is perfect for kicking the soup up a notch. We also requested and were brought a small bowl of extra chochoyotes.

For a main course, Señora Cuevas had Mole Negro de Pollo, a classic, complex and perfectly blended mole. She was very pleased with her selection.

Bixa decided on Pipian Rojo de Cerdo, a mole  based on seeds; in this instance on carnitas of pork. She told us it was somewhat oversalted. The presentation was fairly underwhelming.

I had Espinazo de Verde; or pork backbone in green mole, one of my favorite moles. A number of years ago, I took a one day cooking class with Pilar Cabrera, chef owner of La Olla restaurant and the La Casa de Sabores Cooking School, in the (now shuttered) bed and breakfast of the same name. Ours was made with free range chicken, which, incidentally, we bought at the Mercado La Democracia.

Making Mole verde demands close attention to cooking times, so the meat is tender yet the vegetables are not overcooked. Most importantly, the mole itself must not be overcooked, or it will lose its attractive green color and become olive drab.

The Espinazo en Verde at La Coronita was perfect in every way. 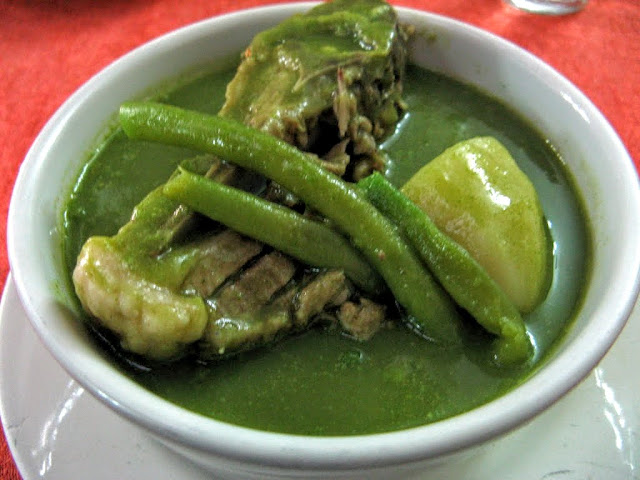 We were mostly pleased and satisfied. I give the highest recommendation to La Coronita. If you are looking for a well prepared, traditional Oaxacan meal, without flights of the chef's creative whimsies, plus excellent service and very reasonable prices, you should go to La Coronita. 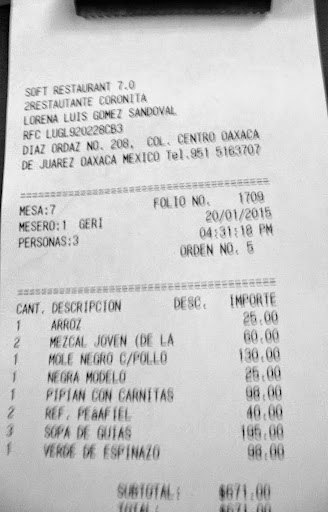 Ambience: conservative but attractive.
Restrooms: Oddly located at the back of the hotel's internal parking garage, but the restrooms are clean, and supplied with TP.


View Larger Map
Posted by Don Cuevas at 6:38 AM

The masa dumplings would be great in mole!

Or under stracotto!
DC