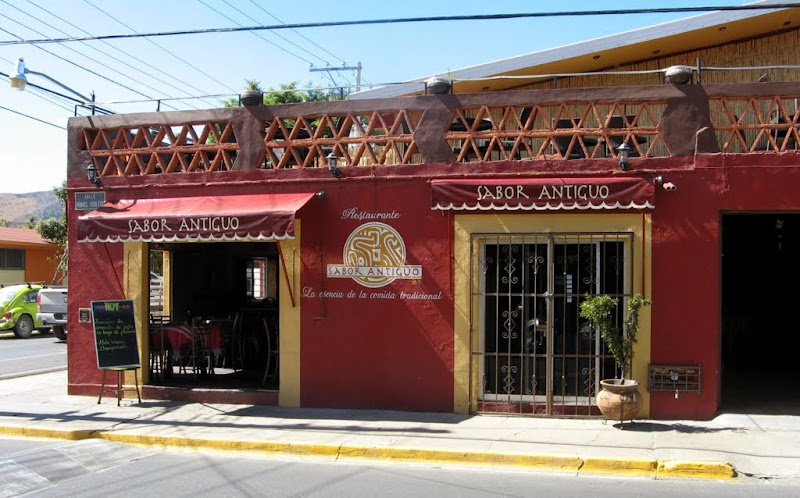 Restaurante Sabor Antiguo was a serendipitous find, discovered while browsing Google Street View for Al Sol Studios y Departementos, a most attractive group of rental apartments. (Unfortunately, none were available that met our needs without reserving a year in advance.)

The restaurant is directly across the street (Manuel Doblado) from the main door to Al Sol's ground floor coffeehouse.

TripAdvisor had a scant handful of reviews. Sabor Antiguo is distant from the Oaxaca central tourist zone.

The restaurant's decor is simple but very attractive. Breakfasts and comida are offered. The comida menú del día is offered from 2:00 p.m. until about 5:00 p.m.

Here's a menu showing the choices that were offered the day we ate there. 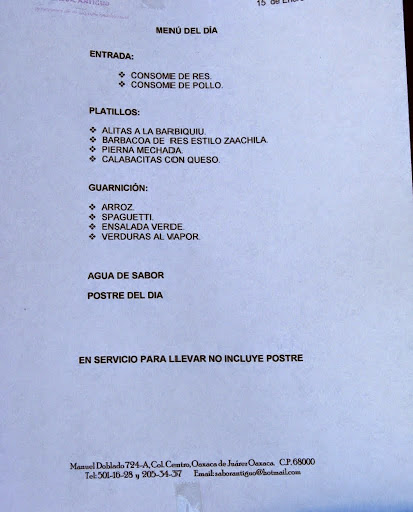 The final price varies according to which main dish you select. Mine was $85 pesos, my wife's a little less.

The meal came with a pitcher of refreshing limonada, garnished with tiny cubes of watermelon. A nice touch. 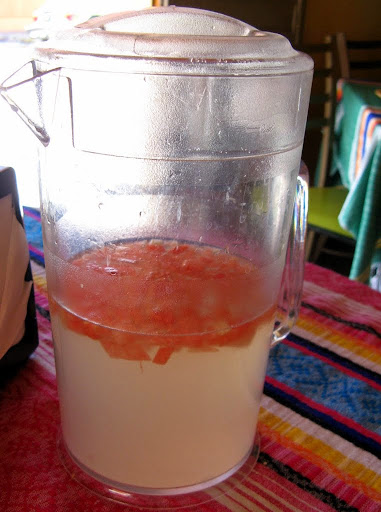 We had a choice of soups: Consomé de Res (beef) or Consomé de Pollo (chicken). We chose beef. It was simple but very good, with small chunks of what may have been beefy innards. Basically, it was brown stock, but with subtle and unusual seasonings. We saw some bowls of Consomé de Pollo brought out. They all had a sizeable piece of chicken half submerged in the broth.

A special touch was the plate of fresh herbs they brought us. It held berros (watercress),  chepiche and huajes. We enjoyed the first two, but the huajes were less appealing. Overall, a small but great complement to our meal.

Below, a quote from a TripAdvisor reviewer.

I didn't think the huajes were that bad, just a bit of a  nuisance to extract from the pod, and in the end, boring.

For a main course, I had Barbacoa de Res Estilo Zaachila. This was a modest cut of very well cooked boneless beef, rather coarse in texture, but deeply infused with the taste of complex, mellow spices. (It made me think of a Chinese dish, Cold Spiced Shin of Beef.)

As you see in the photo above, it was accompanied by a bit of meh! Mexican espaguetti and a little salad with a sweet dressing. We could have had rice instead of the spaghetti.

Doña Cuevas had Pierna Mechada (fresh ham), which came with a delicious sweet and sour sauce. She requested more sauce, and it was brought to her without extra charge. (In fact, we were offered seconds on salad and spaghetti, but turned it down as we were satisfied.)
Of course, we had plentiful tortillas, hechas a mano, but rather tough, in what seems to a characteristic of tortillas in Oaxaca. Without me asking, they brought an o.k. bolillo.

Dessert was included. That day it was a little  section of baked banana, drizzled with a little condensed milk. It wasn't bad, although it's not a favorite dessert of mine. 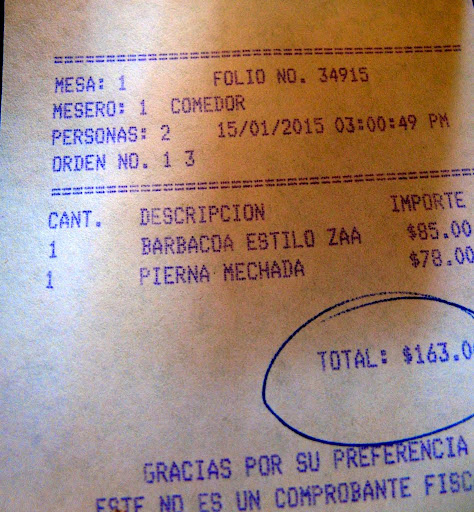 View Larger Map
Posted by Don Cuevas at 7:13 AM

Definitely an improvement over the day before.

Supposedly the new highway (to be finished this year) will get us only a two-hour-drive from Puerto to your restaurant there in Oaxaca - and if that were possible now maybe we would see you two ;-)

That would be cool, but chances are we won't be back in Oaxaca next year.