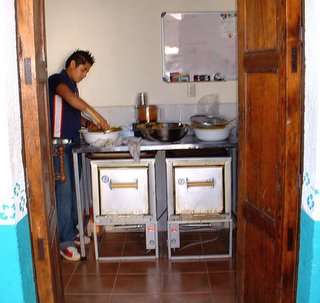 Eventually, everyone shows up for dinner

We are going to Thanksgiving dinner at Restaurante Cha Cha Cha, owned by Rick Davis, an American from Woodside, CA; and his Mexican partner, Enrique Ramirez Granados.

I'd volunteered to make pumpkin pies, as they only had pecan pie on this, their first Thanksgiving Day menu here in Pátzcuaro. Rick generously and very bravely accepted my offer.

What a project that turned out to be! First off, pie pumpkins are not common in or near central Michoacán. Susie and I were in Morelia on Tuesday (parenthetically, to pick up, at last, our FM-3 visas from Migracíon. It didn't take but an hour this time. We celebrated by lunching on shrimp and octopus cocktails at a nearby stand, Mariscos "El Delfin".)

Later, we went shopping, but couldn't find any pumpkin. I developed a backup plan, to use either camotes ( a sort of sweet potato) or mamey, a luscious, largish, football shaped fruit with deep orange flesh and a taste, when ripe, of pumpkin, sweet potato, honey and an indefinable but alluring taste. The interior of these mameyes, when cut, is sort of "alien pod" looking. The seeds, often in pairs, are  very smooth and shiny.

Back in Pátzcuaro and pumpkin-less, I decided to go early to the mercado and try to buy something there. I got there early, as the stands were being set up, but there was still a lot of produce for sale. After searching up and down the mercado streets, I was directed to one fruit stand whre I found mameyes. They were expensive: $81 MXP for 3 kilos, but I got them. I also had 2 kilos of camotes and a 1 kilo of carrots. I then walked back up Calle La Paz to the Basilica, where our car was parked to the side near the restaurant.

Rick was just opening up (9 AM) so I hoped to get a fast start on the pies. But things slowed down. Rick had been to Morelia also, and had brought back 3 large shopping bags of pumpkins, perhaps 4 or 5 kilos, cut in large sections.

"All we had to do" was scrape out the seeds and fibers, cook them, cool them; then remove the flesh from the rind. That's it! ;-)
Except also, for mashing, then straining the pulp. All this is prelude to mixing the filling, which is the easy part.

As the pumpkin chunks simmered on the stove top, along with the carrots (used to give a richer orange color to the filling —an old baker's trick—, I peeled and sorted out the mameyes. This may have been the Forbidden Fruit in the Garden. It is easy to peel with the hands, The seed(s) are easy to remove. The rich and lascivious flesh is simple to scrape out with a soup spoon. It didn't take 25 minutes to do this and then puree it in the Cuisinart food processor. 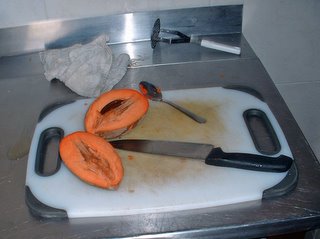 
Meanwhile, I'd go over and check the cooling pumpkin.  Because there was so much pumpkin, I had to cook it in 3 batches. Fortunately, there are more than adequate stove burners available in the open kitchen. I constructed the pies in the oven/washup room, just behind some swinging doors, next to the walk-in cooler. (Restaurante Cha cha cha is very well set up, for the most part. However, the ovens are uniquely compact, and require special skills to operate.

Rúben, the waiter and general kitchen helper assisted me in straining the pumpkin, as well as both he and Rick assisting with the utensil washing. The mood was focused, yet friendly, and not pressured, for which I give thanks.

Making the crusts was not fun. The only flour I was able to buy is a relatively strong bread flour. Worse, the local solid vegetable/meat shortening is extremely stiff. It's not emulsified, like our familiar Crisco™. This makes it difficult to get the right moisture content in the pie crust dough, without over handling, and thereby toughening the crust. Eventually, I worked it out, but I fear that the crusts I made will be only a durable foundation for the creamy pie fillings.

As I was doing this, a bearded, older American came into the patio just outside the oven/washup room. He was making reservations for himself and his mother. I introduced myself and asked his name. He said, "Jimmy B——r".

Finally, we met, after all these years. He's used to live in  Izard County, AR, not far from from my Mother-in-law's house. He and Susie and I didn't know each other well; but we saw him on occasion. Our former doctor, Craig M—m, is Jimmy's ex-brother-in-law.
Jimmy used to have guest rooms to rent in a casa on the edge of Pátzcuaro, but by the time we arrived, that business had closed. We may see him and his mother at dinner today if our reservation times coincide.

Meanwhile, Rick turned on the unusual ovens for me. They are small, steel sheet chambers with no racks nor runners for shelves. You light them with a butane torch from underneath, turning a very small knob to more or less adjust the heat. The temperature gauge, of course, is in Centigrade. Fortunately, I'd brought a good oven thermometer with me.
To keep the baking food from burning, the pans or whatever are placed on upside-down clay bowls. (Very tricky to reach into the hot oven with a pie pan loaded with crust and liquid filling. Oh, YEAH!

But eventually, with help, I got the four motley pumpkin pies in. They should take 1 hour to bake: 15 minutes at 425ºF, and 45 min. at 350º F. This was only partially successful. The pies took nearly 2 hours to bake!

I was getting very tired, and I really wanted to get the 2 mamey pies into the oven. (There was just barely enough filling to do 2 pies, although I hadn't used anywhere near all the pulp. It was just possible to redistribute the filling so that each pie had a fair share. finally, I put them into the oven, trusting that Rick and Rúben would get them out in good order. I went out, got in the car, maneuvered it gracefully through town, without running into anyone (or vice-versa) and up the road of 50 or so topes to home. It was fun, sort of, but before I'd ever do it again, I'd better survey the layout and available equipment.


PS: I awoke early today, as is my habit, and decided to make potato rolls. I've already formed a sheet and a half of cut rolls, and it seems that the LP gas tank is running low. (Symptoms: water heater pilot light went out twice, gas stove top lights with difficulty.) Fortunately, we have a second, full tank. When the day breaks,, I'll find out where the wrench is, and change tanks. Fortunately, the gas company is less than a mile away, and they deliver promptly on request. Too bad we don't have a phone to call them. I've put the potato rolls into the cold, second bedroom, where they should rise very slowly.

Happy and Bountiful Thanksgiving Day to all my readers! We'll let the lovely Restaurante Cha Cha Cha feed us. There'll be no cooking nor dishwashing for us. Please pass the dressing, the gravy and the creamed onions. Thanks. 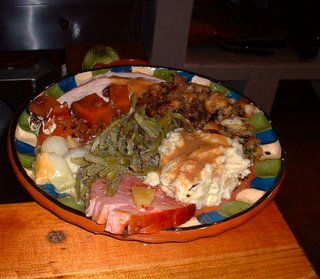 Hi. I've just stumbled across your blog and find it fascinating. I am Australian, but lived in Mexico for a short time many years ago. Reading about your daily life there brings back many fond memories, and for that I thank you :)

Thank you, Tanya, for your kind comments.