I'm frustrated and disgusted, because the several hundred words I wrote in a draft yesterday afternoon were not saved. Maybe it's a "hint" that I could do better this time. I'm saving this as I go to TextEdit, so I don't lose it to Blogger's vagaries.

I'm going to try to be more concise this time around. Our other eating experiences in Zihuatanejo can be divided into two categories: more or less forgettable; and memorable.

In the first category was a lunch at Salvador's on Calle Adelita: two cocteles de camarones, $55 each; an order of tasty sopes de frijoles (3 count), $70; an order of ordinary French Fries, a beer and a good limonada.

The cocteles de camarones were of the style we'd had two years previous at El Burro Borracho, on Playa Troncones. It's a cup of seasoned ketchup with diced tomatoes, chopped onion and shrimp. The shrimp is drowned in so much ketchup that you can hardly taste them. I plan to ask in the future how the cocteles are prepared.
Our bill was $119 pesos, but written as $290. My wife caught the error, and the waiter quietly corrected it.

That same Wednesday night, the touted Nardo's seafood at the town end of Adelita was not open, so we went to La Rana René, almost directly beneath our hotel. The waiter was a bit over eager, pushing us to get our order in before the larger party seated on the beach. We succumbed and one of us chose the Pulpos and the other the Huauchinango Al Mojo de Ajo. The octopus was o.k. although at first seeming too salty. The large red snapper was fine, although I've had better even inland at Mariscos La Güera in Pátzcuaro.
We shared a pitcher of limonada, and our bill was in the vicinity of 235 pesos. 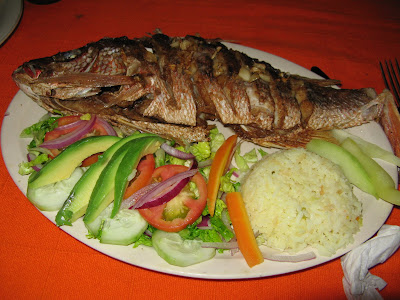 We did eat at two places worthy of mention. The first was the justly famed Tamales y Atoles "Any", in Zihuatanejo centro. The service and the food quailty were both superior, although I was surprised to find prices higher than expected. After all, it's located decidedly in la Zona Turística. Some English is spoken.

I enjoyed a very good, generous, spicy Mole de Olla, $100 pesos. La Esposa had a well made Consomé de Pollo $60 or $70, I forget, loaded with vegetables, rice and shredded chicken. There were good salsas and hearty handmade, blue corn tortillas. A couple of decent cafe de ollas, and we were satisfied. We would return there when in Zihua again. 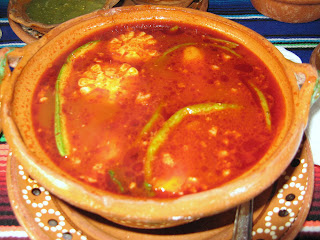 Later that day, we braved the afternoon heat, to walk 10 minutes to Fonda Doña Licha, on Calle Cocos, not far from the Plaza Kioto glorieta. (roundabout). This spotless place is the real deal and from our limited sampling, I highly recommend it. (Plus, it was nice to again hear Spanish spoken in a restaurant in Mexico.)

The orange uniformed waitresses are competent and ours was energetic and perky. There's a nice selection of dishes for the daily comida corrida ($45) but Thursdays are Pozole Days. My wife ordered the delicious Pozole Verde, which came accompanied by a plate of botanas, including a cooked and perhaps pickled pig's hock (which we didn't eat), pickled vegetables and chiles; taquitos and crunchy tostadas. The only tiny flaw was that the condiments on the table included powdered, not leaf orégano. 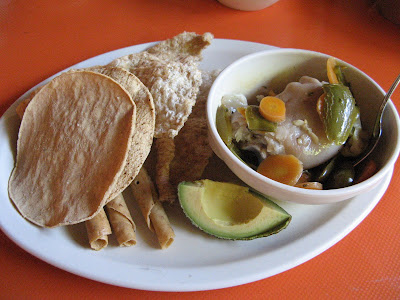 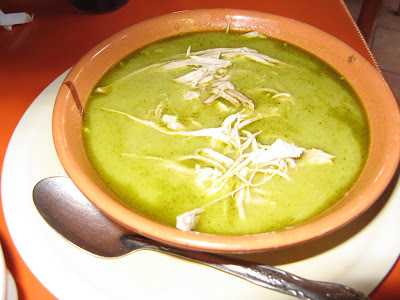 I went off the Comida Del Día Menú, to the Especialides, where, for only $70, I had Cecina de Yecapixtla, Morelos, (semi-dried salted beef) accompanied by rice and salad. The white rice was perfectly plain and perfectly cooked, just the thing for muting the salty preserved cecina. I enjoyed it, but I confess that the last half was getting a little monotonous in its saltiness.
I had a beer, then an agua mineral, and Doña Cuevas a tall glass of refreshing Agua de Jamaica.
Our bill was a very reasonable $180 pesos.

On our last morning, we returned for breakfast to the good value Casa Cafe, on Calle Adelita, where we both had pleasant Southwestern Omelets, filled with sliced avocado, bacon and cheese, and covered in a mild tomato sauce. La Casa Cafe is a good place; just avoid any elaborate concoctions when the place is busy.
Posted by Don Cuevas at 7:13 AM

While you were at Salvador's on Calle Adelita: having two cocteles de camarones, and sopes de frijoles plus your order of ordinary French Fries, on a scale of one to 5 stars how would you rate Salvadors?

Now I know that you had a so so meal at El Burro Borracho, on Playa Troncones. Where the cocktail was a mishmash of a cup of seasoned ketchup with diced tomatoes, chopped onion and shrimp, where the shrimp were covered up with so much ketchup you could hardly taste them.
Based on that would it be fair to say it was one star or less?

Now while you tried to get into Nardo's seafood which was closed, you went to La Rana René, The waiter made your dining experience a tad tedious by rushing you, would that be a one or two star for the service aspect?

And when you did get your Pulpo and Huachunango Al Mojo de Ajo at Nardo's how many stars would you give for that?.Now since you paid $235 pesos for the meal would that be two or three dollar signs on a one to 4 dollar sign scale?

So if you were to summarize,
and list Salvador's

Just trying to visualize your experiences so that I can visual put together an idea to guide me on our next visit to Ziha.

Have you ever considered doing a service to your readers by doing a hotel and restaurant review?

I for one would be appreciative of it!

So, Tancho; you are serious?

We didn't get to Nardo's, as it was closed, so we went to La Rana René.
Food: ***
Service ** 1/2
Price: $$
The overall service was good, and we got our food reasonably quickly. I wouldn't let my mild annoyness at being rushed lower the rating.

I think that to do this well, it would be necessary to define the price ranges. As they stand now, my "reviews" are purely subjective. That's all they are meant to be. As we rarely eat in high end restaurants, I have little or no concept as to what "$$$$" would mean.

A gringa coming out of Salvador's was raving about how great it was. We didn't think agree. Some people are impressed by "margs"—margaritas. That doesn't figure in my ratings. (For that matter, some people like a lot of ketchup.)

It was nearly 3 years ago since we were at the Burro Borracho at Troncones. Their Tiritas de Pescado were good. The beer was ice-cold. The Coctel de Camarones was terrible. I don't remember the rest.
On that basis, I'd rate it as follows:
Food **
Service: ***
Price: $$

Maybe I'll incorporate your suggestions in my next reviews; maybe I'll even revise my recent post...later.

Little by little....you will see the light!
Think of it as a public service!

Tancho, me estás tomando el pelo.
(And I'd just awakened from a nap.)

How can a star rating be superior to a detailed description, (however subjective), and a telling of the cost of the meal?

Star ratings and prices expressed in $$ symbols are for guidebooks that have a lot of restaurants to cover but limited space. Not a problem here.

*I'm sure that if I didn't write that correctly, MexicoBob will correct me. :-)

I am just trying to ease you into your handy hotel and restaurant guide and review site....

I kid you not!


Inch by Inch....you will see the light and be rewarded.

There are always descriptions that reenforce the "star" rating system! You are on the right track.

I may have to start charging Comment Fees, in addition to enabling Word Verification and Moderation.

Think of all the cocteles de camarones (properly made!) I could buy if I charged commenters by the word!!

Made my first visit to Troncones, briefly, during a jaunt to Zihua. Did not eat at the famous Drunken Donkey, but did eat at a nearby beach place, which was okay.

Didn´t care for Troncones. Too many signs in English, which invariably means you´re getting hosed on prices.

Thank you for your comments, people like you do that the restaurant works better every day, we appreciate it!

We wish we were in Zihua now because it's very cold here near Pátzcuaro. A bowl of your pozole verde would make the visit even better.