We returned yesterday to the pleasant town of Ziracuarétiro, in the warm, lush semi-tropical zone near Uruapan.
About a month ago, we had a pleasant dinner at La Mesa de Blanca, which is in the town itself. Ever seeking something new and different, we decide on Hacienda Los Arcos.
From its website, we already knew that it was a much larger and elaborate restaurant than La Mesa de Blanca. The website displayed a decor dripping with chuchería (tchotchkes). But it was the buffet service which gave me serious doubts as to the culinary worthiness of the restaurant. However, based on Felipe Zapata's glowing recommendation, we four, Georgia, Susie, Ron and I decided to give it a try.
(This again illustrates how much people's preferences vary.)
When we got to Ziracuarétiro, we made a brief recon of the town center. There's a nice little plaza and the attractive bell tower of the modern church form a centerpiece. Close by, on a shady side street,  is the Balneario Ziracua, which looks a bit worn, although we didn't enter it.
To one side are the park-like grounds of El Gorjeo de Las Aves en Las Mañanas de Abril, a breakfast only restaurant owned by the same people of La Mesa de Blanca. 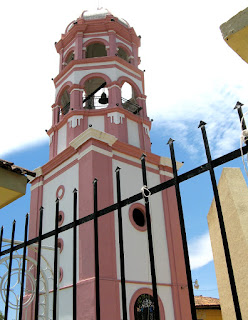 Hacienda Los Arcos is actually at Los Fresnos, about 5 kilometers south of Ziracua. It's hard to miss, both for its prominent signs and the extensive group of buildings atop a hill. 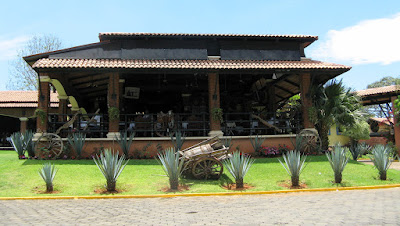 The parking is ample and paved, and a hostess greets visitors at the parking lot. Of the various dining areas, La Terraza looked most attractive, and we took a corner table with a view. The decor is Hacienda meets Annie Oakley and Wagon Train. A small fountain was noteworthy.
We were given the option of the buffet or the a la carte menu. Although I was already decided against the buffet, I gave it a look once over. There were numerous steam table pans with covers, but after a quick look at the chiles rellenos, I really was uninterested in seeing more.
The best looking section was the plancha where carne sirloin asada could be cooked to order, and attractive brochetas de camarones, which unfortunately, appeared precooked. Sra. Doña Cuevas decided to have the buffet, which cost $170 MXN. But she ate mostly salads and fruits, interspersed with some camarones en salsa de mango. I'll get to that later.
Our waiter prepared a very good salsa de molcajete tableside. We tasted and had it made to our liking. It consisted of roasted tomatoes, salt and a choice of chile habanero or serrano or both. No cilantro, but it was very good.
The remaining three of us decide to share two appetizers. the first were 3, plump "camaronillas" or shrimp and cheese quesadillas. That was a good choice, especially spiked with the salsa de molcajete.
The next appetizer was an excellent Champiñones al Ajillo (fun to say as well as tasty to eat.) This was a 4 **** dish, one of the best, made with fresh mushrooms, possibly tomato; onion, garlic and chiles. 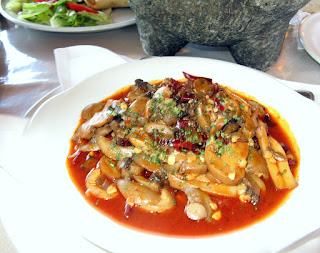 I ordered a Crema de Aguacate, served hot, which 3 of us shared. It was pleasant but too subtle, and we felt it could have been enhanced with some sort of garnish, or a variation in texture. 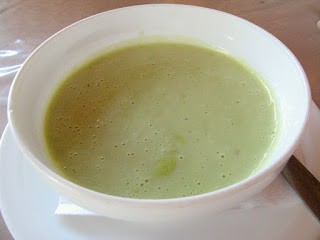 After this good start, the meal declined to a mediocre level.
For main courses, we ordered as follows: Georgia, Camarones Al Mojo de Ajo; Ron, an Arrachera, accompanied by a crema y tocino topped baked potato, elote (which he skipped) and cebollitas; I had Camarones Al Tamarindo.
Here's the score: Camarones Al Mojo; small to medium tails on shrimp in a thickened garlic sauce, resembling a poorly made Cantonese dish. The bits of garlic were evenly minced  and shaped, looking as though they came out of a jar of prepared garlic. Not awful, but not up to the standard to which we are accustomed.
Arrachera: Ron said it was ordinary and probably not marinaded.
Camarones Al Tamarindo; o.k. but unbalanced sauce. Kind of a one-dimensional tamarind tartness. The accompanying mound of rice was tepid and just boring.

We passed on dessert, as we were quite full, and the desserts we'd seen displayed on a table of the buffet did not appeal to us. They looked store-bought.

Ron wanted an espresso, or a café con leche, but there is no espresso machine, and the only coffee available was café de olla or what I think is a "cappucino" made from a mix.

The four of us did drink, at various times, a cerveza Pacífico; a tequila and Coke, a Dubonnet on the rocks; a copa de vino tinto Argentino, Las Moras; a Vampiro (good, but I've had better elsewhere.); and a pitcher of overly sweet Limonada.
The cuenta for all that was $1,131 MXN, to which we added a good tip, because the service was above average.
In conclusion, after only one visit, it's a pleasant restaurant, but you'd do better just having appetizers and drinks.
My ratings:
Food: ***
Service: ****
Price: $$-$$$ (Each $= 100 pesos Mexicanos)
Ambience: ornate western
Restrooms: small but very clean

When seeing photos of properties like this, I wish that I could have seen or experienced the Hacienda life from the past.

When we were looking at properties in the area in the early 90's we saw a Hacienda for sale on the banks of Zirahuen.

I almost considered the purchase, but fortunately figured out the cost of upkeep to either keep or restore them to their past glory.

The only way it worked before was to have the people live there with a live work relationship for life.

I will make your Los Arcos a definite must see on our next trek to Uruapan. The food certainly looks better than you experienced. Considering the size of the town , it is probably considered the best for kilometers around.
Thank you for your posting of the pictures and review, I need to somehow collate them into a easy travel edition to keep in the car.

That is my whole months eating out budget - spendy for a couple living on a fixed ssi income - but good report all the same - I will save up ;-)

John, I guess everyone has their own budget priorities. We don't usually spend a lot of time traveling, which can be very expensive. (We do make exceptions.) Our house rent and living expenses are relatively low.

Most of our dining out is much less. A big bill for the two of us at Mariscos La Güera might reach $300 pesos, but not often.

These splashy, more expensive restaurants may or may not be worth the money. It depends on one's tastes and budget.

If I had thought of it, I would have steered you away from the buffet. They used to just have the buffet on Sundays. Seems they have it more often now.

I´m with Calypso. In my decade south of the border, I have never, ever spent that much on a restaurant meal. Doubt I ever will.

I love this place, and I´ve enjoyed every dining experience there, though the buffet is forgettable.

And every visit, save the two buffet Sundays, we´ve made there has been during the week when you find few other customers. Better, I think.

The location is great, too.

Good food in a fantastic setting. That´s what I think.

Felipe,
Thanks for your comments.

About buffets:
Only Doña Cuevas had the buffet. The other three of us ordered a la carte.

I am not a buffet fan, although there may be a few rare exceptions. Very rarely.

Costs:
Felipe wrote:
"I´m with Calypso. In my decade south of the border, I have never, ever spent that much on a restaurant meal. Doubt I ever will."

In our case, it was probably the several drinks that increased the bill to that level. Even the non-alcoholic pitcher of limonada was $90 flipping pesos!

The bill for the two of us, at the Casino Espanõl in Mexico City was almost as much. Carpe diem, I say!

In the end, I prefer La Mesa de Blanca. It's more in touch with local culinary roots, and the decor is much more tasteful. But Los Arcos has some outstanding items. Re-read the OP.

Service:
I felt the service at Blanca's to be more relaxed and yet attentive. However, I have no compliants about service at Los Arcos. The two are subtly different, in my limited experience with both.

The view:
The view from both is nice; Blanca's is of a pleasant town while Arcos is of a broader rural landscape, unfortunately flawed by a dirt quarry and a view of the autopista. You just can't have everything. ;-)

If I want good food, low prices, and a nice view, I can cook in my own kitchen and eat out under the "porch". But when we dine out, I expect to eat things that will delight, or surprise, and satisfy me. Food I can't or won't bother to prepare at home. Those things, plus good service, is what I am paying for.

I, too, thought the prices rather pricey.

And how on earth is it pronounced in Spanish, what with all the problems Mexicans have with the "th" sound.

Can you give a phonetic translation?

I suppose "parfaith" is a Mexican Spanish spelling of "parfait." The h is silent. My amiga Nora Cris, of another blog, "¿Gusta usted?" indicated on my photo album that parfait would be her dessert choice.

I'd guess is a multi-layer ice cream, or less likely, gelatine dessert.

I saw elsewhere that "pathé" is a Mexican Spanish spelling of "paté". Maybe it sounds more elegant that way.
Or, it's simply a misspelling. Happens in the States, too.

Hi Don Cuevas: On the copycat blog thing, you might want to think about changing your RSS Feed preferences (these are for folks reading in a blog reader) -- from what I understand, switching to shorter, truncated posts prevent bots from finding your post and stealing it. Also, found some more good info here: http://lorelle.wordpress.com/2006/04/10/what-do-you-do-when-someone-steals-your-content/

All that aside: the champiñones al ajillo here look fantastic!

Gracias, Lesley for the advice
Unfortunately, brevity is not my strong suit. But I'll look into the URL you sent me.

I've never tinkered with my RSS feed. I wonder where it is.

By the way, as far as I can see, the majority of posts on the copycat blog are copied from TulsaFoodBlog, mine are the proud exception.
http://www.tulsafoodblog.com/
It's a commercial site.