Saturday morning launched with a walk to La Piccolina, which this time was readily accessible. I had wanted to have barbacoa at Barbacoa de Siguilucán, Hidalgo, which on an earlier visit had been across the street from the Hotel Pal. But alas, not this time. It was gone.

So two of us had light breakfasts at La Piccolina, Ron abstaining, as he was saving room for Ricos Tacos Toluca.

En route, on C/ Ernesto Pugibet, we saw the usual long lines to purchase the weekends only barbacoa at Cocina Vianey. This place is very popular, and if you want their barbacoa, get there early or stand in line.

We got to Ricos Tacos Toluca with only short detour. There were already considerable clientele around the stand. The red and green sausages were hung in the window with care. It was like Christmas in April. 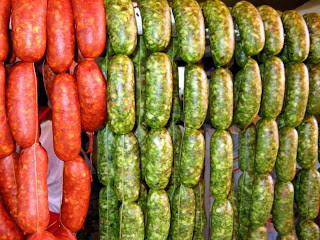 When we were able to get close enough to the order window, Ron and I both got a pair of generously filled tacos. He, one chorizo verde and rojo each; I a chorizo rojo and a taco de bistec (thinking I was ordering a taco of cecina enchilada). 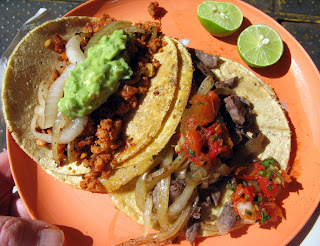 The tacos are dressed with long strands of sauteed onions, and you can help yourself to a salsa roja and a spicy salsa de aguacate from two large molcajetes within reach. 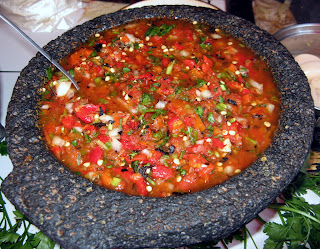 We sat at benches outside enjoying our tacos. Meanwhile, Sra. Cuevas was shopping at a large restaurant supply store across C/ López, where she bought some nice, plain white plates and a couple of pairs of spring loaded tongs.

Tentative ratings for Ricos Tacos Toluca
Food: ***1/2
Service: Get in line and order.
Price: -$ BARGAIN! Tacos, $13 pesos each
Ambience: It's a street corner, you know?

We then walked back to the hotel for a long rest until our afternoon reservation at El Bajío, in far flung Azcatpotzalco, on Av. Cuitláhuac. There would be a test of navigation skills, using an iPod touch and Google Maps as an adjunct.

We allowed ourselves about 40 minutes to arrive at the restaurant, but with a willing taxista and the iPod Touch, we made efficient work of it. The route shown on the computer varies slightly from that on the iPod. We didn't make that short loop at the beginning. (Edited to make them the same.)

The cab fare was surprisingly less than $50 pesos, but we gave the taxista a modest tip, for being so adaptable.

It was 3:00 p.m. Saturday afternoon, a peak time for the restaurante. A Sra. Nieto, the hostess as well as Carmen Ramírez, daughter of the owner, greeted us and we were quickly seated. Soon, a better table became available, and Sra. Nieto suggested that we move to it.

We started our comida with a couple of Cervezas Bohemia Claras and a glass of very good horchata for Doña Cuevas. After considerable discussion, we chose three entradas (appetizers) from the menu. (There are a lot more.)

It was difficult to decide what to have for our platos fuertes. There was a small conjunto de música Jarocha playing and sing very well, but loudly and at close hand.


The barbacoa was a slightly dry version that came without consomé, although that could be ordered separately. On reflection, we should have. The Carnitas Estilo Bajío were  juicy, prepared with Tequila and cerveza plus some seasoning vegetables.

Ron also ordered Arroz y Plátanos con Mole de Xico, a signature mole. I tasted it. It is very dark, complex and interesting, but I have doubts that I could consume a whole dish of that mole. It distantly reminded me of Hoisin Sauce.

We finished our meal with a well made café de olla, a licor Agavero, a couple of orders of flan and one order of natillas. The flan was just o.k. and the natillas, a type of liquid custard, was smooth and pleasant.
Ratings For El Bajío Cuitláhuac

Live Music Advisory: Moderate to loud. Musical group may not be present during the week.
In fact, when we dine again at El Bajío, we will go on a weekday.


View Larger Map
Posted by Don Cuevas at 4:59 AM