The Quest For The Ring 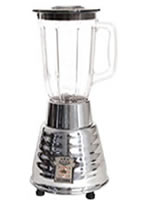 So it was with the little rubber gasket of our blender, a Licuadora "Man". It was several years ago when a friend in Oaxaca recommended the Man line of Mexican made blenders to replace our cool Breville blender when it fell apart. A small ferretería in Pátzcuaro had a Man Comercial model in stock. It boasted a powerful, two speed motor (I avoid buying blenders with more than two speeds and especially, multiple buttons that collect goo.) and especially, this blender boasted a nearly unbreakable Lexan beaker. The salesman beat the beaker on the bannister of the stairs to demonstrate its durability.  I was impressed, so I bought it. I think I paid $950 pesos.

Not long ago, as Sra. Cuevas was washing up the blender, she noticed that the small, double layer gasket was torn. It was only a matter of time until it would completely tear, so I set out to find a replacement. This rubber ring may be small, but it's vital to the successful operation of the blender. The Man website was helpful in identifying the part. Ref #5: Junta de Hule. Parte #716.

From there, I obtained a list of authorized service providers, finding two in Morelia and one in México Centro, not three blocks from where we'd been the week before!

It was logical to try Morelia next. There was a shop listed called Proveedora del Hogar on Avenida Madero, close to where a friend once lived. About a week or so ago, we successfully navigated the centro and even found parking less than two blocks away. My good luck ended when I reached the shop, only to find out it had moved and was now a TelCel outlet. (I bet that that there are more TelCel shops than taquerías in any average Mexican city.)

The young ladies there gave me directions to the blender repairs place, but we were unable to find it amidst the welter of businesses at "Tres Puentes".

There was still another possibility in Centro, but we were beginning to wear out. But the lady at La Frontera had told me of a licuadora parts store on Avenida Lázaro Cárdenas, near Mercado Independencia. We slowly drove along that street but couldn't find it.

At that point we retreated and I was preparing for another trip to Mexico City, where we are going anyway later this month, carrying the old blender ring to where the "Laiting" (Illumination) District adjoins Chinatown.

But a few days ago, while in Pátzcuaro, I had the bright idea of inquiring at the original ferretería "Manríquez" where I'd bought the machine. He directed me to nearby Vidrioeléctrica, Pátzcuaro's largest hardware store.

About 10 minutes of discussion with the salesgirl ensued. She pulled out various licuadora parts as I described with increasing adjectives what I was seeking.
"Anillo o junta de hule doble y flexible."
At last, she reached into a drawer in front of her and pulled out a Ring. Although it was only $5 pesos, I knew better than to buy more than one, until I tried this one on my blender.

The results were successful, altough the original ring was somewhat glued into the threaded cuff due to fruit juice leakage. After a short soak in soapy water, it came free, and I was able to fit the new one in place. I haven't tried it yet, but I'm confident that it will work.

I've had that identical blender for a good number of years with no problems. Now and then I flip that rubber gasket off and clean it and under it. Maintenance, mi amigo, dodges problems down the road.

But if I ever need a replacement, you've gone and done the legwork for me. Gracias.

This anti-spam gadget you've got here is a first-class pain in the butt.

By now you should have known that video electric has everything! That is everything except easy parking. Too bad they are not located somewhere with a parking lot, because then I would probably be there every day.
I wonder if it is the same size as the more common blenders, if so, Bodega Arruera even has them, and they have a parking lot......

I enjoy these hunting tales. They make Mexico that much more interesting.

I had no idea about "Man" liquadoras. When my old Osterizer gives up the ghost, I'll look into "Man."

Tancho, when we are shopping in that part of Pátzcuaro, we usually park in the paid lot of the Hotel Parroquia, which is on Calle Álvaro Obregon, almost exactly across from the Correos. $10 pesos an hour, for clean, spacious parking.

Steve; thanks for your kind words. I was thinking that this was my dullest blog post ever, and I hesitated to publish it.

Marc: I hadn't considered it might not be a factory part. I still haven't tested the new seal.

I too love these tales of searching out elusive parts and services. Anyone who has spent any time in Mexico can understand exactly what you went through. It once took me two weeks to find a simple wood screw longer than 1 3/4 inches to repair a broken satellite dish!

Croft, these Pátzcuaro ferreterías are endlessly fascinating, unless you are in a hurry. The operation is appealingly old fashioned, although the all female staff (I wonder why that is?) can look up parts on computer monitors at the counter.

And, of course, you never pay the clerk who helped you. No; you get a chit which you then take to a cashier cage, pay, get your chit stamped, take it to the pickup counter, and turn it in in exchange for your purchase.

About the anti spam thing: yes, it's a pain. On the advice of Felipe Zapata, I have obtained a Disqus account, and I'm trying to get it to work. However, it may be a month or so until I can implement this, due to technical and personal reasons.

I have heard about Cool Breville blenders that it ruins at very high speed and we can make our tasty juice in just seconds with the help of this blender. So, It would be a best deal to anyone to purchase it.